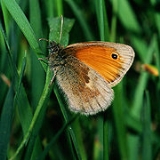 Encyclopedia
The Small Heath Coenonympha pamphilus is a butterfly
Butterfly
A butterfly is a mainly day-flying insect of the order Lepidoptera, which includes the butterflies and moths. Like other holometabolous insects, the butterfly's life cycle consists of four parts: egg, larva, pupa and adult. Most species are diurnal. Butterflies have large, often brightly coloured...
species belonging to the family
Family (biology)
In biological classification, family is* a taxonomic rank. Other well-known ranks are life, domain, kingdom, phylum, class, order, genus, and species, with family fitting between order and genus. As for the other well-known ranks, there is the option of an immediately lower rank, indicated by the...
Nymphalidae
Nymphalidae
The Nymphalidae is a family of about 5,000 species of butterflies which are distributed throughout most of the world. These are usually medium sized to large butterflies. Most species have a reduced pair of forelegs and many hold their colourful wings flat when resting. They are also called...
, (subfamily Satyrinae
Satyrinae
Satyrinae, the satyrines or satyrids, commonly known as the Browns, is a subfamily of the Nymphalidae . They were formerly considered a distinct family, Satyridae. This group contains nearly half of the known diversity of brush-footed butterflies...
, commonly known as "the Browns"). It is widespread in Eurasia
Eurasia
Eurasia is a continent or supercontinent comprising the traditional continents of Europe and Asia ; covering about 52,990,000 km2 or about 10.6% of the Earth's surface located primarily in the eastern and northern hemispheres...
and northwestern Africa
Africa
Africa is the world's second largest and second most populous continent, after Asia. At about 30.2 million km² including adjacent islands, it covers 6% of the Earth's total surface area and 20.4% of the total land area...
, preferring drier habitats than other Coenonymphae. The larva
Larva
A larva is a distinct juvenile form many animals undergo before metamorphosis into adults. Animals with indirect development such as insects, amphibians, or cnidarians typically have a larval phase of their life cycle...
l host plants are grasses
Poaceae
The Poaceae is a large and nearly ubiquitous family of flowering plants. Members of this family are commonly called grasses, although the term "grass" is also applied to plants that are not in the Poaceae lineage, including the rushes and sedges...
, notably Sheep's Fescue
Sheep's Fescue
Sheep's Fescue or Sheep Fescue is a species of grass.-General Description:It is a perennial plant sometimes found in acidic ground, for example in the Portlethen Moss, Scotland and mountain pasture, throughout Europe and eastwards across much of Asia; it has also been introduced to North...
and rough meadow grass Poa trivialis
Poa trivialis
Poa trivialis , is a perennial plant, and is regarded in the USA as an ornamental plant and is of the Poa family.-Description:...
.

The butterfly loosely resembles a small Meadow Brown
Meadow Brown
The Meadow Brown, Maniola jurtina, is a butterfly found in European meadows, where its larvae feed on grasses, such as Sheep's Fescue.Similar species are Gatekeeper and Small Heath ....
, but the brown colour of the wings appears noticeably paler in flight. Unlike the Meadow Brown and other common members of Satyrinae
Satyrinae
Satyrinae, the satyrines or satyrids, commonly known as the Browns, is a subfamily of the Nymphalidae . They were formerly considered a distinct family, Satyridae. This group contains nearly half of the known diversity of brush-footed butterflies...
, the Small Heath is a lateral basker, only ever resting with its wings closed and angled at 90° to the sun.

The larvae have lifespans of varying length, even within the same climate, thus the imagines
Imago
In biology, the imago is the last stage of development of an insect, after the last ecdysis of an incomplete metamorphosis, or after emergence from the pupa where the metamorphosis is complete...
of one generation may be seen over a long period. The butterfly usually has two, occasionally three, broods and is on the wing from mid May until early October (late June to mid August in colder climates). The insect overwinters in its larval stage.

The Small Heath, like its cousin the Wall Brown
Wall Brown
The Wall Brown, Lasiommata megera, is a butterfly in the family Nymphalidae . It is widespread in the Palearctic ecozone with a large variety of habitats and a number of generations a year.-Range:...
, has been in serious decline across much of southern England for reasons unclear, and was accordingly designated as a UK BAP
Biodiversity Action Plan
A Biodiversity Action Plan is an internationally recognized program addressing threatened species and habitats and is designed to protect and restore biological systems. The original impetus for these plans derives from the 1992 Convention on Biological Diversity...
Priority Species (research only) by DEFRA in 2007.