Encyclopedia
Sharpless asymmetric dihydroxylation (also called the Sharpless bishydroxylation) is the chemical reaction
Chemical reaction
A chemical reaction is a process that leads to the transformation of one set of chemical substances to another. Chemical reactions can be either spontaneous, requiring no input of energy, or non-spontaneous, typically following the input of some type of energy, such as heat, light or electricity...
of an alkene
Alkene
In organic chemistry, an alkene, olefin, or olefine is an unsaturated chemical compound containing at least one carbon-to-carbon double bond...
with osmium tetroxide in the presence of a chiral
Chirality (chemistry)
A chiral molecule is a type of molecule that lacks an internal plane of symmetry and thus has a non-superimposable mirror image. The feature that is most often the cause of chirality in molecules is the presence of an asymmetric carbon atom....
quinine
Quinine
Quinine is a natural white crystalline alkaloid having antipyretic , antimalarial, analgesic , anti-inflammatory properties and a bitter taste. It is a stereoisomer of quinidine which, unlike quinine, is an anti-arrhythmic...
ligand
Ligand
In coordination chemistry, a ligand is an ion or molecule that binds to a central metal atom to form a coordination complex. The bonding between metal and ligand generally involves formal donation of one or more of the ligand's electron pairs. The nature of metal-ligand bonding can range from...
to form a vicinal
Vicinal (chemistry)
In chemistry vicinal stands for any two functional groups bonded to two adjacent carbon atoms. For example the molecule 2,3-dibromobutane carries two vicinal bromine atoms and 1,3-dibromobutane does not....
diol
Diol
A diol or glycol is a chemical compound containing two hydroxyl groups A geminal diol has two hydroxyl groups bonded to the same atom...
.

It is common practice to perform this reaction using a catalytic amount of osmium tetroxide, which after reaction is regenerated with either potassium ferricyanide
Potassium ferricyanide
Potassium ferricyanide is the chemical compound with the formula K3[Fe6]. This bright red salt contains the octahedrally coordinated [Fe6]3− ion. It is soluble in water and its solution shows some green-yellow fluorescence.-Preparation:...
or N-methylmorpholine N-oxide
N-Methylmorpholine N-oxide
N-Methylmorpholine-N-oxide, NMO or NMMO is an organic compound. This heterocyclic amine oxide and morpholine derivative is used in organic chemistry as a co-oxidant and sacrificial catalyst in oxidation reactions for instance in osmium tetroxide oxidations and the Sharpless asymmetric...
. This dramatically reduces the amount of the highly toxic and very expensive osmium tetroxide needed. These four reagents are commercially available premixed ("AD-mix
AD-mix
AD-mix in organic chemistry is a commercially available mixture of reagents for performing amongst others the Sharpless asymmetric dihydroxylation of alkenes. The mix is available in two variations, "AD-mix α" and "AD-mix β" following ingredient lists published by Sharpless...
") The mixture containing (DHQ)2-PHAL is called AD-mix-α, and the mixture containing (DHQD)2-PHAL is called AD-mix-β.

The reaction mechanism of the Sharpless dihydroxylation begins with the formation of the osmium tetroxide - ligand complex (2). A -cycloaddition with the alkene (3) gives the cyclic intermediate 4. Basic hydrolysis
Hydrolysis
Hydrolysis is a chemical reaction during which molecules of water are split into hydrogen cations and hydroxide anions in the process of a chemical mechanism. It is the type of reaction that is used to break down certain polymers, especially those made by condensation polymerization...
liberates the diol (5) and the reduced osmate (6). Finally, the stoichiometric oxidant regenerates the osmium tetroxide - ligand complex (2). 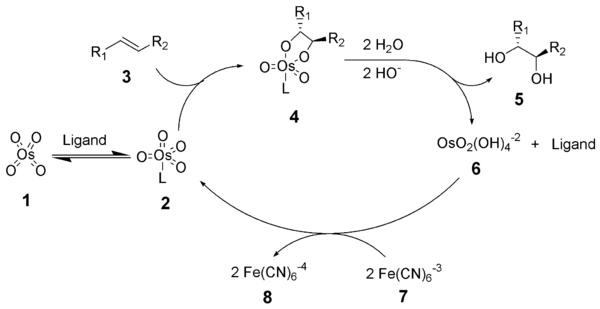 Dihydroxylation in the absence of a coordinating ligand requires the use of a stoichiometric amount of osmium. Catalytic, asymmetric dihydroxylation reduces the cost of this procedure one thousandfold, opening the door for advances in biomimetic and sympathetic osmates.

The first step in the synthesis of azasugar 6 is a dihydroxylation reaction of the prochiral
Prochiral
In stereochemistry, prochiral molecules are those that can be converted from achiral to chiral in a single step.If two identical substituents are attached to a sp3-hybridized atom, the descriptors pro-R and pro-S are used to distinguish between the two...
diene
Diene
In organic chemistry a diene or diolefin is a hydrocarbon that contains two carbon double bonds.Conjugated dienes are functional groups, with a general formula of CnH2n-2. Dienes and alkynes are functional isomers...
1. Azasugars are pharmacologically relevant. The entire reaction sequence takes place in water as a reaction medium and protective groups were not required. Notice the chemoselectivity
Chemoselectivity
Chemical reactions are defined usually in small contexts , such generalizations are a matter of utility. The preferential outcome of one instance of a generalized reaction over a set of other plausible reactions, is defined as chemoselectivity...
in the nucleophilic substitution
Nucleophilic substitution
In organic and inorganic chemistry, nucleophilic substitution is a fundamental class of reactions in which an electron nucleophile selectively bonds with or attacks the positive or partially positive charge of an atom or a group of atoms called the leaving group; the positive or partially positive...
of bromine by the hydroxyl group in step 2.