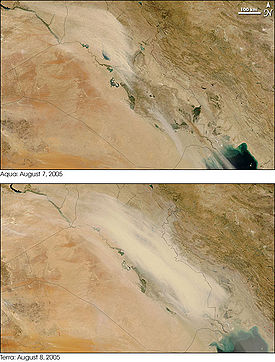 A shamal is a northwesterly wind
Wind
Wind is the flow of gases on a large scale. On Earth, wind consists of the bulk movement of air. In outer space, solar wind is the movement of gases or charged particles from the sun through space, while planetary wind is the outgassing of light chemical elements from a planet's atmosphere into space...
blowing over Iraq
Iraq
Iraq ; officially the Republic of Iraq is a country in Western Asia spanning most of the northwestern end of the Zagros mountain range, the eastern part of the Syrian Desert and the northern part of the Arabian Desert....
and the Persian Gulf
Persian Gulf
The Persian Gulf, in Southwest Asia, is an extension of the Indian Ocean located between Iran and the Arabian Peninsula.The Persian Gulf was the focus of the 1980–1988 Iran-Iraq War, in which each side attacked the other's oil tankers...
states (including Saudi Arabia
Saudi Arabia
The Kingdom of Saudi Arabia , commonly known in British English as Saudi Arabia and in Arabic as as-Sa‘ūdiyyah , is the largest state in Western Asia by land area, constituting the bulk of the Arabian Peninsula, and the second-largest in the Arab World...
and Kuwait
Kuwait
The State of Kuwait is a sovereign Arab state situated in the north-east of the Arabian Peninsula in Western Asia. It is bordered by Saudi Arabia to the south at Khafji, and Iraq to the north at Basra. It lies on the north-western shore of the Persian Gulf. The name Kuwait is derived from the...
), often strong during the day, but decreasing at night. This weather effect occurs anywhere from once to several times a year, mostly in summer but sometimes in winter. The resulting wind typically creates large sandstorms
Dust storm
A dust / sand storm is a meteorological phenomenon common in arid and semi-arid regions. Dust storms arise when a gust front or other strong wind blows loose sand and dirt from a dry surface. Particles are transported by saltation and suspension, causing soil to move from one place and deposition...
that impact Iraq, most sand having been picked up from Jordan
Jordan
Jordan , officially the Hashemite Kingdom of Jordan , Al-Mamlaka al-Urduniyya al-Hashemiyya) is a kingdom on the East Bank of the River Jordan. The country borders Saudi Arabia to the east and south-east, Iraq to the north-east, Syria to the north and the West Bank and Israel to the west, sharing...
and Syria
Syria
Syria , officially the Syrian Arab Republic , is a country in Western Asia, bordering Lebanon and the Mediterranean Sea to the West, Turkey to the north, Iraq to the east, Jordan to the south, and Israel to the southwest....
.

Shamals result from strong northwest winds that are funnelled into the Persian Gulf by the mountains of Turkey and Iraq to the northeast and the high plains of Saudi Arabia to the southwest. The winds most commonly are strongest in the Spring to Summer and hence the Shamal events are as well, although they can occur at any time of year. During that time of year the polar jet stream to the north moves southward to become close to the subtropical jet to the south. The proximity of the two jet streams promotes the formation of strong but often dry cold fronts which create the Shamal. The strong winds of the Shamal form in front of and behind the front. Iraq typically experiences strong wind-driven dust 20 to 50 days per year .

According to folklore, the first major shamal occurring around May 25 is known as the Al-Haffar, or driller, since it drills huge depressions in desert sand dunes. The second, arriving in early June, coincides with the dawn star, Thorayya (Pleiades
Pleiades in folklore and literature
The high visibility of the star cluster Pleiades in the night sky has guaranteed it a special place in many cultures, both ancient and modern.The astrological Pleiades was originally described in Three Books of Occult Philosophy by Heinrich Cornelius Agrippa .The heliacal rising of Pleiades often...
), and is therefore named Barih Thorayya. During this event, which is more violent than the others, fishermen usually remain in port because ancient folklore
Folklore
Folklore consists of legends, music, oral history, proverbs, jokes, popular beliefs, fairy tales and customs that are the traditions of a culture, subculture, or group. It is also the set of practices through which those expressive genres are shared. The study of folklore is sometimes called...
tells them that this wind devours ships. Near the end of June, the last shamal arrives, known as the Al-Dabaran, or the follower. It is violent and continues for several days. Local residents keep doors and windows firmly shut as this shamal includes an all-penetrating fine dust which gets into everything. 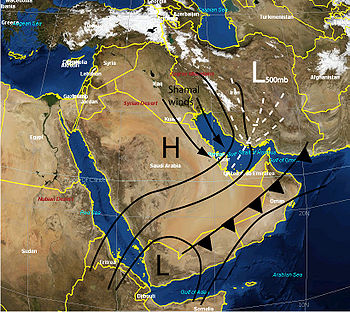 When a passing storm with a strong cold front passes over the mountains of Turkey and Kurdistan, the leading edge of a mass of relatively cooler air kicks up dust
Dust
Dust consists of particles in the atmosphere that arise from various sources such as soil dust lifted up by wind , volcanic eruptions, and pollution...
and sand
Sand
Sand is a naturally occurring granular material composed of finely divided rock and mineral particles.The composition of sand is highly variable, depending on the local rock sources and conditions, but the most common constituent of sand in inland continental settings and non-tropical coastal...
, sending it aloft. Temperatures at lower elevations still hover above 105 °Fahrenheit
Fahrenheit
Fahrenheit is the temperature scale proposed in 1724 by, and named after, the German physicist Daniel Gabriel Fahrenheit . Within this scale, the freezing of water into ice is defined at 32 degrees, while the boiling point of water is defined to be 212 degrees...
(42 °Celsius
Celsius
Celsius is a scale and unit of measurement for temperature. It is named after the Swedish astronomer Anders Celsius , who developed a similar temperature scale two years before his death...
) during these events. In Iran
Iran
Iran , officially the Islamic Republic of Iran , is a country in Southern and Western Asia. The name "Iran" has been in use natively since the Sassanian era and came into use internationally in 1935, before which the country was known to the Western world as Persia...
, where winter storms can bring heavy snow to the terrain, a layer of dust can settle onto the snowpack.

A winter Shamal is associated with the strengthening of a high pressure over the peninsula after the passage of a cold front while a deep trough
Trough (meteorology)
A trough is an elongated region of relatively low atmospheric pressure, often associated with fronts.Unlike fronts, there is not a universal symbol for a trough on a weather chart. The weather charts in some countries or regions mark troughs by a line. In the United States, a trough may be marked...
of low pressure maintains itself over areas East of the Persian Gulf. This leads to strong northerly wind over the Gulf for periods up to 5 days. They are associated with cold temperatures.

The places around the Middle East most likely to see the winter variety lie near Lavan Island
Lavan Island
Lavan Island is an Iranian island in the Persian Gulf. It has an area of 76 km². The island has one of the four major terminals for export of crude oil in Iran. The largest one is in Kharg Island.-See also:*Kookherd*Bastak*Bandar Lengeh...
, Halul Island, and Ras Rakan. They persist from 24 to 36 hours during the winter and occur as frequently as two to three times per month between December and February. A persistent three to five day event occurs only once or twice a winter, and is accompanied by very high winds and seas.

Shamals normally last three to five days. Since the resultant dust and sandstorm is several thousand feet deep, travel by air and ground comes to a standstill. When they spread to nearby bodies of water, fishing
Fishing
Fishing is the activity of trying to catch wild fish. Fish are normally caught in the wild. Techniques for catching fish include hand gathering, spearing, netting, angling and trapping....
and shipping
Shipping
Shipping has multiple meanings. It can be a physical process of transporting commodities and merchandise goods and cargo, by land, air, and sea. It also can describe the movement of objects by ship.Land or "ground" shipping can be by train or by truck...
become equally difficult. During these wind events, several Southwest Asia
Southwest Asia
Western Asia, West Asia, Southwest Asia or Southwestern Asia are terms that describe the westernmost portion of Asia. The terms are partly coterminous with the Middle East, which describes a geographical position in relation to Western Europe rather than its location within Asia...
international airports have recorded winds as high as 49 mph (43 knots) which can drive dust over large distances downwind. The sandblasting effect has been reported to strip the paint off of cars http://www.met.gov.kw/Climate/mohd/ht.phphttp://horizons1325.com/history/1990s/desert_storm/judy-2.html.

A notable storm caused by a shamal covered Baghdad
Baghdad
Baghdad is the capital of Iraq, as well as the coterminous Baghdad Governorate. The population of Baghdad in 2011 is approximately 7,216,040...
with sand on August 8, 2005, resulting in a closing of nearly all shops and public activity. The storm also overwhelmed Baghdad's Yarmuk Hospital, which treated more than a thousand people with respiratory distress.
From February 1 through February 4, 2008, there was a massive dust storm associated with a Shamal wind advected over the Arabian Sea. It was estimated that the leading edge of the dust storm moved at around 20 km/h, and at one point extended from Muqdisho, Somalia to Mumbai, India.. Dust from this storm received press from the sports media as it swept across the Dubai Desert Classic golf tournament, where Tiger Woods was playing.

In Afghanistan shamal means both 'wind' and 'North.'