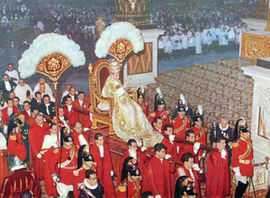 The sedia gestatoria is a portable throne
Throne
A throne is the official chair or seat upon which a monarch is seated on state or ceremonial occasions. "Throne" in an abstract sense can also refer to the monarchy or the Crown itself, an instance of metonymy, and is also used in many expressions such as "the power behind the...
on which Pope
Pope
The Pope is the Bishop of Rome, a position that makes him the leader of the worldwide Catholic Church . In the Catholic Church, the Pope is regarded as the successor of Saint Peter, the Apostle...
s were carried until 1978. It consists of a richly adorned, silk-covered armchair, fastened on a suppedaneum, on each side of which are two gilded rings; through these rings pass the long rods with which twelve footmen (palafrenieri), in red uniforms, carry the throne on their shoulders. On prior occasions, as in the case of pope Stephen III, popes were carried on the shoulders of men.

The sedia gestatoria is an elaborate variation on the sedan chair. Two large fans (flabella
Flabellum
A flabellum , in Catholic liturgical use, is a fan made of metal, leather, silk, parchment or feathers, intended to keep away insects from the consecrated Body and Blood of Christ and from the priest, as well as to show honour. The ceremonial use of such fans dates back to ancient Egypt, and an...
) made of white ostrich feathers —a relic of the ancient liturgical use of the flabellum, mentioned in the Constitutiones Apostolicae— are carried at either side of the sedia gestatoria.

The sedia gestatoria was mainly used to carry popes to and from papal ceremonies in the Basilica of St. John Lateran
Basilica of St. John Lateran
The Papal Archbasilica of St. John Lateran , commonly known as St. John Lateran's Archbasilica and St. John Lateran's Basilica, is the cathedral of the Diocese of Rome and the official ecclesiastical seat of the Bishop of Rome, who is the Pope...
and St. Peter's Basilica
St. Peter's Basilica
The Papal Basilica of Saint Peter , officially known in Italian as ' and commonly known as Saint Peter's Basilica, is a Late Renaissance church located within the Vatican City. Saint Peter's Basilica has the largest interior of any Christian church in the world...
. The sedia was used as part of papal ceremony for nearly one millennium. Its origins are sometimes thought to date back to Byzantium
Byzantium
Byzantium was an ancient Greek city, founded by Greek colonists from Megara in 667 BC and named after their king Byzas . The name Byzantium is a Latinization of the original name Byzantion...
where Byzantine emperors were carried along in a similar manner, but many sources indicate the use of the sedia is of a much earlier date, probably being derived from rituals accompanying the leadership of the ancient Roman Empire
Roman Empire
The Roman Empire was the post-Republican period of the ancient Roman civilization, characterised by an autocratic form of government and large territorial holdings in Europe and around the Mediterranean....
.

The throne was used more especially in the ceremonies at the coronation
Papal Coronation
A papal coronation was the ceremony of the placing of the Papal Tiara on a newly elected pope. The first recorded papal coronation was that of Pope Celestine II in 1143. Soon after his coronation in 1963, Pope Paul VI abandoned the practice of wearing the tiara. His successors have chosen not to...
of a new pope, and generally at all solemn entries of the pope to St. Peter's or to public consistories. In the first case three bundles of tow
Tow
In the composites industry, a tow is an untwisted bundle of continuous filaments, and it refers to man-made fibres, particularly carbon fibres ....
are burnt before the newly elected pontiff, who sits on the sedia gestatoria, while a master of ceremonies says: "Pater Sancte, sic transit gloria mundi
Sic transit gloria mundi
Sic transit gloria mundi is a Latin phrase that means "Thus passes the glory of the world". It has been interpreted as "Worldly things are fleeting." It is possibly an adaptation of a phrase in Thomas à Kempis's 1418 work The Imitation of Christ: "O quam cito transit gloria mundi" .The phrase was...
" (Holy Father, so passes the glory of the world). The custom of carrying the newly elected pope, and formerly in some countries the newly elected bishop, to his church can be, in some instances, traced back very far and may be compared with the Roman use of the sella curulis
Curule chair
In the Roman Republic, and later the Empire, the curule seat was the chair upon which senior magistrates or promagistrates owning imperium were entitled to sit, including dictators, masters of the horse, consuls, praetors, censors, and the curule aediles...
, on which newly elected consul
Consul
Consul was the highest elected office of the Roman Republic and an appointive office under the Empire. The title was also used in other city states and also revived in modern states, notably in the First French Republic...
s were carried through the city.

Magnus Felix Ennodius
Magnus Felix Ennodius
Magnus Felix Ennodius was Bishop of Pavia in 514, and a Latin rhetorician and poet.He was one of four fifth to sixth-century Gallo-Roman aristocrats whose letters survive in quantity: the others are Sidonius Apollinaris, prefect of Rome in 468 and bishop of Clermont , Ruricius bishop of Limoges ...
, Bishop of Pavia, records in his "Apologia pro Synodo", Gestatoriam sellam apostolicae confessionis, alluding to the Cathedra S. Petri
Chair of Saint Peter
The Chair of Saint Peter is a relic conserved in St. Peter's Basilica, enclosed in a gilt bronze casing that was designed by Gian Lorenzo Bernini and executed 1647-53....
, still preserved in the choir of St. Peter's at Rome. This is a portable wooden armchair, inlaid with ivory, with two iron rings on each side.

Besides the constant use of the Sedia Gestatoria at the coronation of the pope (which seems to date from the beginning of the sixteenth century), etc., it served in the past on different other occasions, for instance when the pope received the yearly tribute of the Kingdom of Naples
Kingdom of Naples
The Kingdom of Naples, comprising the southern part of the Italian peninsula, was the remainder of the old Kingdom of Sicily after secession of the island of Sicily as a result of the Sicilian Vespers rebellion of 1282. Known to contemporaries as the Kingdom of Sicily, it is dubbed Kingdom of...
and of the other fiefs
Fiefdom
A fee was the central element of feudalism and consisted of heritable lands granted under one of several varieties of feudal tenure by an overlord to a vassal who held it in fealty in return for a form of feudal allegiance and service, usually given by the...
, and also, at least since the fifteenth century, when he carried the Blessed Sacrament publicly, in which case the Sedia Gestatoria took a different form, a table being adjusted before the throne. Pius X
Pope Pius X
Pope Saint Pius X , born Giuseppe Melchiorre Sarto, was the 257th Pope of the Catholic Church, serving from 1903 to 1914. He was the first pope since Pope Pius V to be canonized. Pius X rejected modernist interpretations of Catholic doctrine, promoting traditional devotional practices and orthodox...
made use of this on the occasion of the Eucharistic Congress
International Eucharistic Congress
In the Roman Catholic church, a Eucharistic Congress is a gathering of clergy, religious, and laity to bear witness to the Real Presence of Jesus in the Eucharist, which is an important Roman Catholic doctrine...
at Rome in 1905.

Pope John Paul I
Pope John Paul I
John Paul I , born Albino Luciani, , reigned as Pope of the Catholic Church and as Sovereign of Vatican City from 26 August 1978 until his death 33 days later. His reign is among the shortest in papal history, resulting in the most recent Year of Three Popes...
at first declined to use the sedia gestatoria, along with the papal tiara
Papal Tiara
The Papal Tiara, also known incorrectly as the Triple Tiara, or in Latin as the Triregnum, in Italian as the Triregno and as the Trirègne in French, is the three-tiered jewelled papal crown, supposedly of Byzantine and Persian origin, that is a prominent symbol of the papacy...
and several other symbols of papal authority, but was eventually convinced by the Vatican
Holy See
The Holy See is the episcopal jurisdiction of the Catholic Church in Rome, in which its Bishop is commonly known as the Pope. It is the preeminent episcopal see of the Catholic Church, forming the central government of the Church. As such, diplomatically, and in other spheres the Holy See acts and...
staff that its use was necessary in order to allow crowds to see him. Pope John Paul II
Pope John Paul II
Blessed Pope John Paul II , born Karol Józef Wojtyła , reigned as Pope of the Catholic Church and Sovereign of Vatican City from 16 October 1978 until his death on 2 April 2005, at of age. His was the second-longest documented pontificate, which lasted ; only Pope Pius IX ...
refused to use the sedia gestatoria completely. Benedict XVI
Pope Benedict XVI
Benedict XVI is the 265th and current Pope, by virtue of his office of Bishop of Rome, the Sovereign of the Vatican City State and the leader of the Catholic Church as well as the other 22 sui iuris Eastern Catholic Churches in full communion with the Holy See...
has not, as of yet, restored its use. The sedia gestatoria has been functionally replaced in modern times by the motorized and secured "popemobile
Popemobile
Popemobile is an informal name for the specially designed motor vehicles used by the pope during outdoor public appearances without having to employ the antiquated and often impractical sedia gestatoria. The Popemobile was designed to allow the pope to be more visible when greeting large crowds...
".

One can also be found in Lisbon
Lisbon
Lisbon is the capital city and largest city of Portugal with a population of 545,245 within its administrative limits on a land area of . The urban area of Lisbon extends beyond the administrative city limits with a population of 3 million on an area of , making it the 9th most populous urban...
Cathedral Museum along with a pair of Flabella. It is thought its use by the Cardinal Patriarchs of that city was granted by the Popes at great expense due to the efforts of king John V along with many other honours.
The source of this article is wikipedia, the free encyclopedia.  The text of this article is licensed under the GFDL.