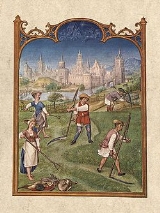 In the 10th and 11th centuries the term "fee" (feudum) could be used either to describe dependent tenure
Land tenure
Land tenure is the name given, particularly in common law systems, to the legal regime in which land is owned by an individual, who is said to "hold" the land . The sovereign monarch, known as The Crown, held land in its own right. All private owners are either its tenants or sub-tenants...
held by a man from his lord, as the term is used now by historians, or it could mean simply "property". It lacked a precise meaning until the middle of the 12th century, when it received formal definition from land lawyers.

Historically the fees of the 11th and the 12th century derived from two separate sources. The first was land carved out of the estates of the upper nobility. The second source was allodial land transformed into dependent tenures. During the 10th century in northern France and the 11th century in France south of the Loire
Loire
Loire is an administrative department in the east-central part of France occupying the River Loire's upper reaches.-History:Loire was created in 1793 when after just 3½ years the young Rhône-et-Loire department was split into two. This was a response to counter-Revolutionary activities in Lyon...
, local magnates either recruited or forced the owners of allodial holdings into dependent relationships and they were turned into fiefs. The process occurred later in Germany, and was still going on in the 13th century.

In 13th-century England, France, Germany, Spain, and Italy the term "feodum" was used to describe a dependent tenure held from a lord by a vassal in return for a specified amount of knight
Knight
A knight was a member of a class of lower nobility in the High Middle Ages.By the Late Middle Ages, the rank had become associated with the ideals of chivalry, a code of conduct for the perfect courtly Christian warrior....
service and occasional financial payments (feudal incidents).

However, knight service in war was far less common than:

A lord in late 12th-century England and France could also claim the right of:

Originally, vassal
Vassal
A vassal or feudatory is a person who has entered into a mutual obligation to a lord or monarch in the context of the feudal system in medieval Europe. The obligations often included military support and mutual protection, in exchange for certain privileges, usually including the grant of land held...
age did not imply the giving or receiving of landholdings (which were granted only as a reward for loyalty), but by the eighth century the giving of a landholding was becoming standard. The granting of a landholding to a vassal did not relinquish the lord's property rights, but only the use of the lands and their income; the granting lord retained ultimate ownership of the fee and could, technically, recover the lands in case of disloyalty or death.

By the middle of the 10th century, fee had largely become hereditary. The eldest son of a deceased vassal would inherit, but first he had to do homage and fealty to the lord and pay a "relief
Relief
Relief is a sculptural technique. The term relief is from the Latin verb levo, to raise. To create a sculpture in relief is thus to give the impression that the sculpted material has been raised above the background plane...
" for the land (a monetary recognition of the lord's continuing proprietary rights over the property). Henry II
Henry II of England
Henry II ruled as King of England , Count of Anjou, Count of Maine, Duke of Normandy, Duke of Aquitaine, Duke of Gascony, Count of Nantes, Lord of Ireland and, at various times, controlled parts of Wales, Scotland and western France. Henry, the great-grandson of William the Conqueror, was the...
transformed them into important sources of royal income and patronage. The discontent of baron
Baron
Baron is a title of nobility. The word baron comes from Old French baron, itself from Old High German and Latin baro meaning " man, warrior"; it merged with cognate Old English beorn meaning "nobleman"...
s with royal claims to arbitrarily assessed "reliefs" and other feudal payments under Henry's son King John
John of England
John , also known as John Lackland , was King of England from 6 April 1199 until his death...
resulted in Magna Carta
Magna Carta
Magna Carta is an English charter, originally issued in the year 1215 and reissued later in the 13th century in modified versions, which included the most direct challenges to the monarch's authority to date. The charter first passed into law in 1225...
of 1215.

Eventually, great feudal lords sought also to seize governmental and legal authority (the collection of taxes, the right of high justice, etc.) in their lands, and some passed these rights to their own vassals.

In northern France in the 12th and 13th centuries military service for fiefs was limited for offensive campaigns to 40 days for a knight. By the 12th century English and French kings and barons began to commute military service for cash payments (scutage
Scutage
The form of taxation known as scutage, in the law of England under the feudal system, allowed a knight to "buy out" of the military service due to the Crown as a holder of a knight's fee held under the feudal land tenure of knight-service. Its name derived from shield...
s), with which they could purchase the service of mercenaries.