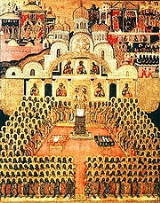 The veneration of icons had been abolished by the energetic measures of Constantine V
Constantine V
Constantine V was Byzantine emperor from 741 to 775; ); .-Early life:...
and the Council of Hieria
Council of Hieria
The iconoclast Council of Hieria was a Christian council which viewed itself as ecumenical, but was later rejected by the Eastern Orthodox and Roman Catholic Churches. It was summoned by the Byzantine Emperor Constantine V in 754 in the palace of Hieria opposite Constantinople. The council...
which had described itself as the seventh ecumenical council. These iconoclastic
Iconoclasm (Byzantine)
The Byzantine Iconoclasm encompasses two periods in the history of the Byzantine Empire when Emperors, backed by imperially-appointed leaders and councils of the Orthodox Church imposed a ban on religious images or icons. The "First Iconoclasm", as it is sometimes called, lasted between about 730...
tendencies were shared by his son, Leo IV
Leo IV the Khazar
Leo IV the Khazar was Byzantine Emperor from 775 to 780 CE.Leo was the son of Emperor Constantine V by his first wife, Irene of Khazaria , the daughter of a Khagan of the Khazars...
. After the latter's early death, his widow, Irene of Athens, as regent for her son, began its restoration, moved thereto by personal inclination and political considerations.

When, in 784, the imperial secretary Patriarch Tarasius was appointed successor to the Patriarch Paul IV
Patriarch Paul IV of Constantinople
Paul IV, known as Paul the New, was Ecumenical Patriarch of Constantinople from 780 to 784. He had once opposed the veneration of icons but urged the calling of an ecumenical council to address the iconoclast controversy. He resigned and retired to a monastery due to old age and illness...
, he accepted on the condition that intercommunion with the other churches should be reestablished; that is, that the images should be restored. However, a council, claiming to be ecumenical, had abolished the veneration of icons, so psychologically another ecumenical council was necessary for its restoration. Pope Adrian I
Pope Adrian I
Pope Adrian was pope from February 1, 772 to December 25, 795. He was the son of Theodore, a Roman nobleman.Shortly after Adrian's accession the territory ruled by the papacy was invaded by Desiderius, king of the Lombards, and Adrian was compelled to seek the assistance of the Frankish king...
was invited to participate, and gladly accepted. However, the invitation intended for the oriental patriarchs could not even be delivered to them. The Roman
Roman Catholic Church
The Catholic Church, also known as the Roman Catholic Church, is the world's largest Christian church, with over a billion members. Led by the Pope, it defines its mission as spreading the gospel of Jesus Christ, administering the sacraments and exercising charity...
legates were an archbishop
Archbishop
An archbishop is a bishop of higher rank, but not of higher sacramental order above that of the three orders of deacon, priest , and bishop...
and an abbot
Abbot
The word abbot, meaning father, is a title given to the head of a monastery in various traditions, including Christianity. The office may also be given as an honorary title to a clergyman who is not actually the head of a monastery...
, both named Peter.

The council was again summoned to meet, this time in Nicaea, since Constantinople was still distrusted. The council assembled on September 24, 787 at the church of St. Sophia. It numbered about 350 members; 308 bishop
Bishop
A bishop is an ordained or consecrated member of the Christian clergy who is generally entrusted with a position of authority and oversight. Within the Catholic Church, Eastern Orthodox, Oriental Orthodox Churches, in the Assyrian Church of the East, in the Independent Catholic Churches, and in the...
s or their representatives signed. Tarasius presided, and seven sessions were held in Nicaea.


Proceedings of the Council

First Session (September 24, 787) -- Three bishops, Basilius of Ancyra, Theodore of Myra, and Theodosius of Amorium begged for pardon for the heresy of iconoclasm.

Second Session (September 26, 787) -- Papal legates read the letters of Pope Hadrian I asking for agreement with veneration of images, to which question the bishops of the council answered: "We follow, we receive, we admit".

Third Session (September 28, 787) -- Other bishops having made their abjuration, were received into the council.

Fifth Session (October 4, 787) -- It was shown that the iconoclast heresy came originally from Jews
Jews
The Jews , also known as the Jewish people, are a nation and ethnoreligious group originating in the Israelites or Hebrews of the Ancient Near East. The Jewish ethnicity, nationality, and religion are strongly interrelated, as Judaism is the traditional faith of the Jewish nation...
, Saracens, and Manicheans.

Sixth Session (October 6, 787) -- The definition of the pseudo-Seventh council (754) was read and condemned.

Seventh Session (October 13, 787) -- The council issued a declaration of faith concerning the veneration of holy images:

It was determined that "As the sacred and life-giving cross is everywhere set up as a symbol, so also should the images of Jesus Christ
Jesus
Jesus of Nazareth , commonly referred to as Jesus Christ or simply as Jesus or Christ, is the central figure of Christianity...
, the Virgin Mary, the holy angel
Angel
Angels are mythical beings often depicted as messengers of God in the Hebrew and Christian Bibles along with the Quran. The English word angel is derived from the Greek ἄγγελος, a translation of in the Hebrew Bible ; a similar term, ملائكة , is used in the Qur'an...
s, as well as those of the saint
Saint
A saint is a holy person. In various religions, saints are people who are believed to have exceptional holiness.In Christian usage, "saint" refers to any believer who is "in Christ", and in whom Christ dwells, whether in heaven or in earth...
s and other pious and holy men be embodied in the manufacture of sacred vessels, tapestries, vestments, etc., and exhibited on the walls of churches, in the homes, and in all conspicuous places, by the roadside and everywhere, to be revered by all who might see them. For the more they are contemplated, the more they move to fervent memory of their prototypes. Therefore, it is proper to accord to them a fervent and reverent adoration, not, however, the veritable worship which, according to our faith, belongs to the Divine Being alone — for the honor accorded to the image passes over to its prototype, and whoever adores the image adores in it the reality of what is there represented."

Eighth Session (October 23, 787) -- The last session was held in Constantinople at the Magnaura Palace. The Empress Irene and her son were present and they signed the document.

The clear distinction between the adoration offered to God, and that accorded to the images may well be looked upon as a result of the iconoclastic reform. However sculpture in the round was condemned as "sensual". The twenty-two canons
Canon law
Canon law is the body of laws & regulations made or adopted by ecclesiastical authority, for the government of the Christian organization and its members. It is the internal ecclesiastical law governing the Catholic Church , the Eastern and Oriental Orthodox churches, and the Anglican Communion of...
drawn up in Constantinople also served ecclesiastical reform. Careful maintenance of the ordinances of the earlier councils, knowledge of the scripture
Bible
The Bible refers to any one of the collections of the primary religious texts of Judaism and Christianity. There is no common version of the Bible, as the individual books , their contents and their order vary among denominations...
s on the part of the clergy, and care for Christian conduct are required, and the desire for a renewal of ecclesiastical life is awakened.

The council also decreed that every altar should contain a relic
Relic
In religion, a relic is a part of the body of a saint or a venerated person, or else another type of ancient religious object, carefully preserved for purposes of veneration or as a tangible memorial...
, which remains the case in modern Catholic and Orthodox regulations (Canon VII), and made a number of decrees on clerical discipline, especially for monks when mixing with women.

The papal legates voiced their approval of the restoration of the veneration of icons in no uncertain terms, and the patriarch sent a full account of the proceedings of the council to Pope Hadrian I, who had it translated (the translation Anastasius
Pope Anastasius III
Pope Anastasius III was Pope from April 911 to June 913, was a Roman by birth. A Roman nobleman, Lucian, is sometimes recognized as his father, although other sources assert that he was the illegitimate son of his predecessor Pope Sergius III .Practically nothing is recorded of Pope Anastasius...
later replaced with a better one).

This council is celebrated in the Eastern Orthodox Church, and Eastern Catholic Churches of Byzantine Rite
Byzantine Rite
The Byzantine Rite, sometimes called the Rite of Constantinople or Constantinopolitan Rite is the liturgical rite used currently by all the Eastern Orthodox Churches, by the Greek Catholic Churches , and by the Protestant Ukrainian Lutheran Church...
as "The Sunday of the Triumph of Orthodoxy" each year on the first Sunday of Great Lent
Great Lent
Great Lent, or the Great Fast, is the most important fasting season in the church year in Eastern Christianity, which prepares Christians for the greatest feast of the church year, Pascha . In many ways Great Lent is similar to Lent in Western Christianity...
—the fast that leads up to Pascha
Easter
Easter is the central feast in the Christian liturgical year. According to the Canonical gospels, Jesus rose from the dead on the third day after his crucifixion. His resurrection is celebrated on Easter Day or Easter Sunday...
(Easter)—and again on the Sunday closest to October 11 (the Sunday on or after October 8). The former celebration commemorates the council as the culmination of the Church's battles against heresy
Heresy
Heresy is a controversial or novel change to a system of beliefs, especially a religion, that conflicts with established dogma. It is distinct from apostasy, which is the formal denunciation of one's religion, principles or cause, and blasphemy, which is irreverence toward religion...
, while the latter commemorates the council itself.