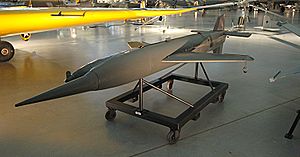 The Henschel Hs 117 Schmetterling (German
German language
German is a West Germanic language, related to and classified alongside English and Dutch. With an estimated 90 – 98 million native speakers, German is one of the world's major languages and is the most widely-spoken first language in the European Union....
for Butterfly
Butterfly
A butterfly is a mainly day-flying insect of the order Lepidoptera, which includes the butterflies and moths. Like other holometabolous insects, the butterfly's life cycle consists of four parts: egg, larva, pupa and adult. Most species are diurnal. Butterflies have large, often brightly coloured...
) was a German
Germany
Germany , officially the Federal Republic of Germany , is a federal parliamentary republic in Europe. The country consists of 16 states while the capital and largest city is Berlin. Germany covers an area of 357,021 km2 and has a largely temperate seasonal climate...
surface-to-air missile
Surface-to-air missile
A surface-to-air missile or ground-to-air missile is a missile designed to be launched from the ground to destroy aircraft or other missiles...
project developed during World War II
World War II
World War II, or the Second World War , was a global conflict lasting from 1939 to 1945, involving most of the world's nations—including all of the great powers—eventually forming two opposing military alliances: the Allies and the Axis...
. There was also an air-to-air version.

The operator used a telescopic sight and a joystick
Joystick
A joystick is an input device consisting of a stick that pivots on a base and reports its angle or direction to the device it is controlling. Joysticks, also known as 'control columns', are the principal control in the cockpit of many civilian and military aircraft, either as a center stick or...
to guide the missile by radio control
Radio control
Radio control is the use of radio signals to remotely control a device. The term is used frequently to refer to the control of model vehicles from a hand-held radio transmitter...
.

In 1941, Professor Herbert A. Wagner
Herbert A. Wagner
Herbert Alois Wagner was an Austrian scientist who developed numerous innovations in the fields of aerodynamics, aircraft structures and guided weapons...
(who was previously responsible for the Henschel Hs 293
Henschel Hs 293
The Henschel Hs 293 was a World War II German anti-ship guided missile: a radio-controlled glide bomb with a rocket engine slung underneath it. It was designed by Herbert A. Wagner.- History :...
anti-ship missile) invented the Schmetterling missile and submitted it to the Reich Air Ministry (RLM), who rejected the design because there was no need for more anti-aircraft weaponry.

However, by 1943 the large-scale bombing of Germany caused the RLM to change its mind, and Henschel was given a contract to develop and manufacture it. There were 59 experimental firings, of which 34 failed.
In May 1944 23 Hs 117 missiles were successfully tested. Mass production was ordered in December 1944, with deployment to start in March 1945. In January 1945 a prototype for mass production was completed, but on 6 February SS-Obergruppenführer
Obergruppenführer
Obergruppenführer was a Nazi Party paramilitary rank that was first created in 1932 as a rank of the SA and until 1942 it was the highest SS rank inferior only to Reichsführer-SS...
Hans Kammler
Hans Kammler
General Dr Ing. Hans Friedrich Karl Franz Kammler was a civil engineer and high-ranking officer of the SS. He oversaw SS construction projects, and towards the end of World War II was put in charge of the V-2 missile programme.He is most commonly referred to as Heinz Kammler or Hans...
cancelled the project.

The Hs 117H was an air-launched variant, designed to be launched from a Dornier Do 217
Dornier Do 217
The Dornier Do 217 was a bomber used by German Luftwaffe during World War II as a more powerful version of the Dornier Do 17, known as the Fliegender Bleistift . Designed in 1937 and 1938 as a heavy bomber, its design was refined during 1939 and production began in late 1940...
, Junkers Ju 188
Junkers Ju 188
The Junkers Ju 188 was a German Luftwaffe high-performance medium bomber built during World War II, the planned follow-on to the famed Ju 88 with better performance and payload...
, or Junkers Ju 388
Junkers Ju 388
The Junkers Ju 388 Störtebeker was a World War II German Luftwaffe multi-role aircraft based on the Ju 88 airframe by way of the Ju 188. It differed from its predecessors in being intended for high altitude operation, with design features such as a pressurized cockpit for its crew...
aircraft. The Hs 117H was designed to attack an enemy aircraft up to 5 km above the launching aircraft.