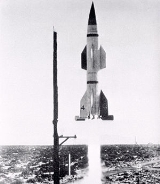 Encyclopedia
The Wasserfall Ferngelenkte Flakrakete (Waterfall Remote-Controlled A-A Rocket), was a World War II
World War II
World War II, or the Second World War , was a global conflict lasting from 1939 to 1945, involving most of the world's nations—including all of the great powers—eventually forming two opposing military alliances: the Allies and the Axis...
guided surface-to-air missile
Surface-to-air missile
A surface-to-air missile or ground-to-air missile is a missile designed to be launched from the ground to destroy aircraft or other missiles...
developed at Peenemünde
Peenemünde
The Peenemünde Army Research Center was founded in 1937 as one of five military proving grounds under the Army Weapons Office ....
, Germany
Germany
Germany , officially the Federal Republic of Germany , is a federal parliamentary republic in Europe. The country consists of 16 states while the capital and largest city is Berlin. Germany covers an area of 357,021 km2 and has a largely temperate seasonal climate...
.

Wasserfall was essentially an anti-aircraft development of the V2 rocket, sharing the same general layout and shaping. Since the missile had to fly only to the altitudes of the attacking bombers, and needed a far smaller warhead to destroy these, it could be much smaller than the V2, about 1/4 the size. The Wasserfall design also included an additional set of fins located at the middle of the fuselage to provide extra maneuvering capability.

Unlike the V2, Wasserfall was designed to stand ready for periods of up to a month and fire on command, therefore the volatile liquid oxygen
Liquid oxygen
Liquid oxygen — abbreviated LOx, LOX or Lox in the aerospace, submarine and gas industries — is one of the physical forms of elemental oxygen.-Physical properties:...
used in the V2 was inappropriate. A new engine design, developed by Dr. Walter Thiel
Walter Thiel
Dr Walter Thiel was a German rocket scientist.He was the third civilian hired by Walter Dornberger for German research at Kummersdorf on November 1, 1932, , and in 1936, transferred to Dornberger's new rocket section...
, was based on Visol (vinyl isobutyl ether) and SV-Stoff, or red fuming nitric acid (RFNA), (94% nitric acid
Nitric acid
Nitric acid , also known as aqua fortis and spirit of nitre, is a highly corrosive and toxic strong acid.Colorless when pure, older samples tend to acquire a yellow cast due to the accumulation of oxides of nitrogen. If the solution contains more than 86% nitric acid, it is referred to as fuming...
, 6% dinitrogen tetroxide
Dinitrogen tetroxide
Dinitrogen tetroxide is the chemical compound N2O4. It is a useful reagent in chemical synthesis. It forms an equilibrium mixture with nitrogen dioxide; some call this mixture dinitrogen tetroxide, while some call it nitrogen dioxide.Dinitrogen tetroxide is a powerful oxidizer, making it highly...
). This hypergolic mixture was forced into the combustion chamber by pressurizing the fuel tanks with nitrogen
Nitrogen
Nitrogen is a chemical element that has the symbol N, atomic number of 7 and atomic mass 14.00674 u. Elemental nitrogen is a colorless, odorless, tasteless, and mostly inert diatomic gas at standard conditions, constituting 78.08% by volume of Earth's atmosphere...
gas released from another tank. Wasserfall was to be launched from rocket bases (code-named Vesuvius) that could tolerate leaked hypergolic fuels in the event of a launch problem.

Guidance was to be a simple radio control
Radio control
Radio control is the use of radio signals to remotely control a device. The term is used frequently to refer to the control of model vehicles from a hand-held radio transmitter...
MCLOS
MCLOS
MCLOS is a first-generation method for guiding guided missiles.With an MCLOS missile, the operator must track the missile and the target simultaneously and guide the missile to the target. Typically the missile is steered with a joystick, and its path is observed through a periscope-type...
system for use against daytime targets, but night-time use was considerably more complex because neither the target nor the missile would be easily visible. For this role a new system known as Rheinland was under development. Rheinland used a radar
Radar
Radar is an object-detection system which uses radio waves to determine the range, altitude, direction, or speed of objects. It can be used to detect aircraft, ships, spacecraft, guided missiles, motor vehicles, weather formations, and terrain. The radar dish or antenna transmits pulses of radio...
unit for tracking the target and a transponder
Transponder
In telecommunication, the term transponder has the following meanings:...
in the missile for locating it in flight, read by a radio direction finder
Radio direction finder
A radio direction finder is a device for finding the direction to a radio source. Due to low frequency propagation characteristic to travel very long distances and "over the horizon", it makes a particularly good navigation system for ships, small boats, and aircraft that might be some distance...
on the ground). A simple analog computer
Analog computer
An analog computer is a form of computer that uses the continuously-changeable aspects of physical phenomena such as electrical, mechanical, or hydraulic quantities to model the problem being solved...
guided the missile into the tracking radar beam as soon as possible after launch, using the transponder to locate it, at which point the operator could see both "blips" on a single display, and guide the missile onto the target as during the day. Steering during the launch phase was accomplished by four graphite rudders placed in the exhaust stream of the combustion chamber, and (once high airspeeds had been attained) by the four air rudders mounted on the rocket tail. Commands were sent to the missile using a modified version of the "Kehl-Strassburg" (code name Burgund) joy-stick system used to direct Henschel Hs 293
Henschel Hs 293
The Henschel Hs 293 was a World War II German anti-ship guided missile: a radio-controlled glide bomb with a rocket engine slung underneath it. It was designed by Herbert A. Wagner.- History :...
glide bomb, which had some significant successes against Allied ships in the Mediterranean.

The original design had called for a 100 kg warhead, but because of accuracy concerns it was replaced with a much larger one (306 kg) based on a liquid explosive. The idea was to create a large blast area effect amidst the enemy bomber stream, which would conceivably bring down several airplanes for each missile deployed. For daytime use the operator would detonate the warhead by remote control.

Conceptual work began in 1941, and final specifications were defined on November 2, 1942. The first models were being tested in March 1943, but a major setback occurred in August 1943 when Dr. Walter Thiel
Walter Thiel
Dr Walter Thiel was a German rocket scientist.He was the third civilian hired by Walter Dornberger for German research at Kummersdorf on November 1, 1932, , and in 1936, transferred to Dornberger's new rocket section...
was killed during the bombing of Operation Hydra, the start of the Operation Crossbow
Operation Crossbow
Crossbow was the code name of the World War II campaign of Anglo-American "operations against all phases of the German long-range weapons programme—operations against research and development of the weapons, their manufacture, transportation and their launching sites, and against missiles in flight"...
bombing campaign against V2 production. After the first successful firing (the third prototype) on March 8, 1944, three Wasserfall trial launches were completed by the end of June 1944. A launch on 8 January 1944 was a failure, with the engine "fizzling" and launching the missile to only 7 km of altitude at subsonic speeds. The following February saw a successful launch which reached a speed of 770 m/s (2,800 km/h) in vertical flight. Thirty-five Wasserfall trial firings had been completed by the time Peenemünde was evacuated on February 17, 1945.

The Bäckebo Rocket, a V-2 rocket
V-2 rocket
The V-2 rocket , technical name Aggregat-4 , was a ballistic missile that was developed at the beginning of the Second World War in Germany, specifically targeted at London and later Antwerp. The liquid-propellant rocket was the world's first long-range combat-ballistic missile and first known...
using Wasserfall radio guidance, crashed in Sweden on June 13, 1944.

According to Albert Speer
Albert Speer
Albert Speer, born Berthold Konrad Hermann Albert Speer, was a German architect who was, for a part of World War II, Minister of Armaments and War Production for the Third Reich. Speer was Adolf Hitler's chief architect before assuming ministerial office...
and Carl Krauch
Carl Krauch
Carl Krauch was a German chemist and industrialist. He was an executive at BASF ; during World War II, he was chairman of the supervisory board. He was a key implementer of the Reich’s Four-Year Plan to achieve national economic self-sufficiency and promote industrial production...
it could have devastated the Allied bomber fleets.

The project enjoyed little support in its earlier stages. Speer, Nazi Germany Minister of Armaments and War Production later claimed:
The source of this article is wikipedia, the free encyclopedia.  The text of this article is licensed under the GFDL.