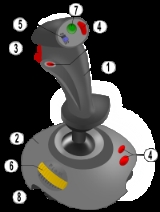 Overview
A joystick is an input device
Input device
In computing, an input device is any peripheral used to provide data and control signals to an information processing system such as a computer or other information appliance...
consisting of a stick that pivots on a base and reports its angle or direction to the device it is controlling. Joysticks, also known as 'control columns', are the principal control in the cockpit
Cockpit
A cockpit or flight deck is the area, usually near the front of an aircraft, from which a pilot controls the aircraft. Most modern cockpits are enclosed, except on some small aircraft, and cockpits on large airliners are also physically separated from the cabin...
of many civilian and military aircraft, either as a center stick or side-stick
Side-stick
A side-stick or sidestick controller is an aircraft control column that is located on the side console of the pilot, usually on the righthand side, or outboard on a two-seat flightdeck...
. They often have supplementary switches on them to control other aspects of the aircraft's flight.

Joysticks are often used to control video games, and usually have one or more push-buttons whose state can also be read by the computer.