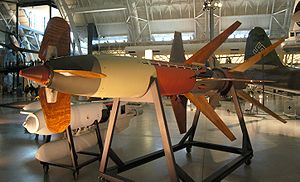 Rheintochter was a German
Germany
Germany , officially the Federal Republic of Germany , is a federal parliamentary republic in Europe. The country consists of 16 states while the capital and largest city is Berlin. Germany covers an area of 357,021 km2 and has a largely temperate seasonal climate...
surface-to-air missile
Surface-to-air missile
A surface-to-air missile or ground-to-air missile is a missile designed to be launched from the ground to destroy aircraft or other missiles...
developed during World War II
World War II
World War II, or the Second World War , was a global conflict lasting from 1939 to 1945, involving most of the world's nations—including all of the great powers—eventually forming two opposing military alliances: the Allies and the Axis...
. Its name comes from the mythical Rheintöchter (Rhinemaidens
Rhinemaidens
The Rhinemaidens are the three water-nymphs who appear in Richard Wagner's opera cycle Der Ring des Nibelungen. Their individual names are Woglinde, Wellgunde, and Flosshilde , although they are generally treated as a single entity and they act together accordingly...
) of Richard Wagner
Richard Wagner
Wilhelm Richard Wagner was a German composer, conductor, theatre director, philosopher, music theorist, poet, essayist and writer primarily known for his operas...
's opera series Der Ring des Nibelungen
Der Ring des Nibelungen
Der Ring des Nibelungen is a cycle of four epic operas by the German composer Richard Wagner . The works are based loosely on characters from the Norse sagas and the Nibelungenlied...
.

Rheintochter was ordered in November 1942 by the German army (Wehrmacht
Wehrmacht
The Wehrmacht – from , to defend and , the might/power) were the unified armed forces of Nazi Germany from 1935 to 1945. It consisted of the Heer , the Kriegsmarine and the Luftwaffe .-Origin and use of the term:...
). Starting in August 1943, 82 test firings were made. An air-launched version was also designed.

The project was cancelled on February 6, 1945. Examples of the missile are on display at the Deutsches Technikmuseum
German Museum of Technology (Berlin)
Deutsches Technikmuseum Berlin was founded in 1982 in Berlin, Germany, and exhibits a large collection of historical technical artifacts. The museum's main emphasis is on rail transport, but it also features exhibits of various sorts of industrial technology. Recently, it has opened both maritime...
at Berlin
Berlin
Berlin is the capital city of Germany and is one of the 16 states of Germany. With a population of 3.45 million people, Berlin is Germany's largest city. It is the second most populous city proper and the seventh most populous urban area in the European Union...
, and the Steven F. Udvar-Hazy Center
Steven F. Udvar-Hazy Center
The Steven F. Udvar-Hazy Center is the Smithsonian National Air and Space Museum 's annex at Washington Dulles International Airport in the Chantilly area of Fairfax County, Virginia, United States....
in Chantilly, Virginia
Chantilly, Virginia
Chantilly is an unincorporated community located in western Fairfax County and southeastern Loudoun County of Northern Virginia. Recognized by the U.S. Census Bureau as a census designated place , the community population was 23,039 as of the 2010 census -- down from 41,041 in 2000, due to the...
.

The initial R1 variant was powered by a two-stage solid-fuel rocket.

Because this variant lacked the ability to reach high altitudes, the R3 model was developed, which had a liquid fuel engine with solid-fuel boosters.