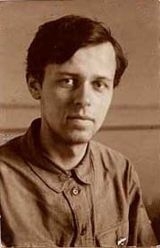 Overview
Andrei Dmitrievich Sakharov was a Soviet
Soviet Union
The Soviet Union , officially the Union of Soviet Socialist Republics , was a constitutionally socialist state that existed in Eurasia between 1922 and 1991....
nuclear
Nuclear physics
Nuclear physics is the field of physics that studies the building blocks and interactions of atomic nuclei. The most commonly known applications of nuclear physics are nuclear power generation and nuclear weapons technology, but the research has provided application in many fields, including those...
physicist
Physicist
A physicist is a scientist who studies or practices physics. Physicists study a wide range of physical phenomena in many branches of physics spanning all length scales: from sub-atomic particles of which all ordinary matter is made to the behavior of the material Universe as a whole...
, dissident
Dissident
A dissident, broadly defined, is a person who actively challenges an established doctrine, policy, or institution. When dissidents unite for a common cause they often effect a dissident movement....
and human rights
Human rights
Human rights are "commonly understood as inalienable fundamental rights to which a person is inherently entitled simply because she or he is a human being." Human rights are thus conceived as universal and egalitarian . These rights may exist as natural rights or as legal rights, in both national...
activist. He earned renown as the designer of the Soviet Union's Third Idea, a codename for Soviet development of thermonuclear weapons. Sakharov was an advocate of civil liberties
Civil liberties
Civil liberties are rights and freedoms that provide an individual specific rights such as the freedom from slavery and forced labour, freedom from torture and death, the right to liberty and security, right to a fair trial, the right to defend one's self, the right to own and bear arms, the right...
and civil reforms in the Soviet Union. He was awarded the Nobel Peace Prize
Nobel Peace Prize
The Nobel Peace Prize is one of the five Nobel Prizes bequeathed by the Swedish industrialist and inventor Alfred Nobel.-Background:According to Nobel's will, the Peace Prize shall be awarded to the person who...
in 1975. The Sakharov Prize
Sakharov Prize
The Sakharov Prize for Freedom of Thought, named after Soviet scientist and dissident Andrei Sakharov, was established in December 1988 by the European Parliament as a means to honour individuals or organisations who have dedicated their lives to the defence of human rights and freedom of thought...
, which is awarded annually by the European Parliament
European Parliament
The European Parliament is the directly elected parliamentary institution of the European Union . Together with the Council of the European Union and the Commission, it exercises the legislative function of the EU and it has been described as one of the most powerful legislatures in the world...
for people and organizations dedicated to human rights and freedoms, is named in his honor.
Sakharov was born in Moscow
Moscow
Moscow is the capital, the most populous city, and the most populous federal subject of Russia. The city is a major political, economic, cultural, scientific, religious, financial, educational, and transportation centre of Russia and the continent...
on May 21, 1921.
x