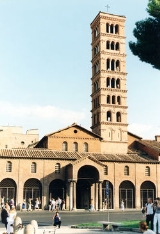 Encyclopedia
The Basilica of Saint Mary in Cosmedin ( or de Schola Graeca) is a minor basilica
Minor basilica
Minor basilica is a title given to some Roman Catholic churches. By canon law no Catholic church can be honoured with the title of basilica unless by apostolic grant or from immemorial custom....
church in
Churches of Rome
There are more than 900 churches in Rome. Most, but not all, of these are Roman Catholic, with some notable Roman Catholic Marian churches.The first churches of Rome originated in places where Christians met. They were divided into three categories:...
Rome
Rome
Rome is the capital of Italy and the country's largest and most populated city and comune, with over 2.7 million residents in . The city is located in the central-western portion of the Italian Peninsula, on the Tiber River within the Lazio region of Italy.Rome's history spans two and a half...
, Italy
Italy
Italy , officially the Italian Republic languages]] under the European Charter for Regional or Minority Languages. In each of these, Italy's official name is as follows:;;;;;;;;), is a unitary parliamentary republic in South-Central Europe. To the north it borders France, Switzerland, Austria and...
. It is located in the rione
Rione
Rione is the name given to a ward in several Italian cities, the best-known of which is Rome. Unlike a quartiere, a rione is usually an official administrative subdivision...
of Ripa
Ripa (rione of Rome)
Ripa is the XII rione of Rome. The logo is a white rudder on a red background, to remind the port of Ripa Grande, placed in Trastevere, but facing the rione.-External links:*...
.

The church was built in the 8th century during the Byzantine Papacy
Byzantine Papacy
The Byzantine Papacy was a period of Byzantine domination of the papacy from 537 to 752, when popes required the approval of the Byzantine Emperor for episcopal consecration, and many popes were chosen from the apocrisiarii or the inhabitants of Byzantine Greece, Byzantine Syria, or Byzantine Sicily...
over the remains of the Templum Herculis Pompeiani in the Forum Boarium
Forum Boarium
The Forum Boarium was the cattle forum venalium of Ancient Rome and the oldest forum that Rome possessed. It was located on a level piece of land near the Tiber between the Capitoline, the Palatine and Aventine hills. Here, too, is where the first bridges were built...
and of the Statio annonae, one of the food distribution centres of ancient Rome
Grain supply to the city of Rome
In classical antiquity, the grain supply to the city of Rome could not be met entirely from the surrounding countryside, which was taken up by the villas and parks of the aristocracy and which produced mainly fruit, vegetables and other perishable goods...
(another is to be found at theatre of Balbus). A deaconry was a place where charity distributions were given to the poor, and it looks likely that such an institution would have been built near the Roman annona.
Since it was located near many Byzantine structures, in 7th century this church was called de Schola Graeca, and a close street is still called della Greca. Greek monks escaping iconoclastic persecutions decorated the church around 782, when pope Adrian I promoted its reconstruction; the church was built with a nave
Nave
In Romanesque and Gothic Christian abbey, cathedral basilica and church architecture, the nave is the central approach to the high altar, the main body of the church. "Nave" was probably suggested by the keel shape of its vaulting...
and two aisles and a portico
Portico
A portico is a porch leading to the entrance of a building, or extended as a colonnade, with a roof structure over a walkway, supported by columns or enclosed by walls...
. Because of its beauty, the church received the adjective cosmedin (from Greek kosmidion), ornate. A sacristy and an oratory dedicated to St. Nicholas were added in the 9th century, by order of Pope Nicholas I
Pope Nicholas I
Pope Nicholas I, , or Saint Nicholas the Great, reigned from April 24, 858 until his death. He is remembered as a consolidator of papal authority and power, exerting decisive influence upon the historical development of the papacy and its position among the Christian nations of Western Europe.He...
, who also built a papal residence, but they were removed in 1085 by Robert Guiscard
Robert Guiscard
Robert d'Hauteville, known as Guiscard, Duke of Apulia and Calabria, from Latin Viscardus and Old French Viscart, often rendered the Resourceful, the Cunning, the Wily, the Fox, or the Weasel was a Norman adventurer conspicuous in the conquest of southern Italy and Sicily...
's Norman
Normans
The Normans were the people who gave their name to Normandy, a region in northern France. They were descended from Norse Viking conquerors of the territory and the native population of Frankish and Gallo-Roman stock...
troops.
It was in Santa Maria in Cosmedin that Popes Gelasius II
Pope Gelasius II
Pope Gelasius II , born Giovanni Caetani , was pope from January 24, 1118 to January 29, 1119.-Biography:He was born between 1060 and 1064 at Gaeta into the Pisan branch of the Caetani family....
(who had been Cardinal Deacon of Titulus S. Mariae in Cosmedin), Celestine III
Pope Celestine III
Pope Celestine III , born Giacinto Bobone, was elected Pope on March 21, 1191, and reigned until his death. He was born into the noble Orsini family in Rome, though he was only a cardinal deacon before becoming Pope...
, and Antipope Benedict XIII (Cardinal Deacon of this church) were elected.

A substantial restoration was accomplished in 1118–1124 under Alfanus, camerarius of Pope Callixtus II
Pope Callixtus II
Pope Calixtus II , born Guy de Vienne, the fourth son of William I, Count of Burgundy , was elected Pope on February 1, 1119, after the death of Pope Gelasius II . His pontificate was shaped by the Investiture Controversy, which he was able to settle through the Concordat of Worms...
. After being acquired by Benedictine
Benedictine
Benedictine refers to the spirituality and consecrated life in accordance with the Rule of St Benedict, written by Benedict of Nursia in the sixth century for the cenobitic communities he founded in central Italy. The most notable of these is Monte Cassino, the first monastery founded by Benedict...
s and a period of decay, in 1718 the church was brought up to a Baroque
Baroque
The Baroque is a period and the style that used exaggerated motion and clear, easily interpreted detail to produce drama, tension, exuberance, and grandeur in sculpture, painting, literature, dance, and music...
style, mainly expressed by a new façade, by Giuseppe Sardi
Giuseppe Sardi
Giuseppe Sardi was an Italian architect active in Rome. He was born at Sant'Angelo in Vado, Marche which was then part of the Papal States...
in 1718. The Baroque additions, however, were removed in the restoration of 1894–1899 together with the coat-of-arms of Pope Clement XI
Pope Clement XI
Pope Clement XI , born Giovanni Francesco Albani, was Pope from 1700 until his death in 1721.-Early life:...
.

Among the former titular cardinal deacons of the church was Reginald Pole, the last Roman Catholic Archbishop of Canterbury.

The church is home to the la Bocca della Verità
La Bocca della Verità
La Bocca della Verità is an image, carved from Pavonazzetto marble, of a man-like face, located in the portico of the church of Santa Maria in Cosmedin in Rome, Italy. The sculpture is thought to be part of a 1st century ancient Roman fountain, or perhaps a manhole cover, portraying one of several...
, an ancient sculpture thought to be a drain covering, located in its portico; but it is worth visiting primarily for its exceptionally well preserved early medieval choir enclosure and its very fine Cosmatesque
Cosmatesque
Cosmatesque, or Cosmati, is a style of geometric decorative inlay stonework typical of Medieval Italy, and especially of Rome and its surroundings. It was used most extensively for the decoration of church floors, but was also used to decorate church walls, pulpits, and bishop's thrones...
pavement. Its bell tower is the tallest medieval belfry in Rome.

The current interior has a nave with two aisles: these are divided by four pilasters and eighteen ancient columns. In the side walls some of the old columns of the Statio Annonae are included. Other fragments of the ancient building can be seen in the crypt. Paintings from the 8th-12th centuries, in three layers, are preserved in the upper part of the nave and in the triumphal arch. The schola cantorum is from the 13th century, while the main altar is a red granite piece from 1123. The Easter candelabrum is also from the 13th century.

The sacristy houses a precious 8th-century mosaic fragment brought here from the Old St. Peter's Basilica. Of the 18th-century restoration, the Crucifix Chapel and the Baptistry can be seen today.

In a side altar on the left of the church is kept the flower crowned skull of St Valentine.