Encyclopedia
Sanfedismo was a popular anti-Republican movement, organized by Cardinal Fabrizio Ruffo
Fabrizio Ruffo
Fabrizio Ruffo was an Italian cardinal and politician, who led the popular anti-republican Sanfedismo movement .-Biography:...
, which mobilized peasants of the Papal States
Papal States
The Papal State, State of the Church, or Pontifical States were among the major historical states of Italy from roughly the 6th century until the Italian peninsula was unified in 1861 by the Kingdom of Piedmont-Sardinia .The Papal States comprised territories under...
against the Parthenopaean Republic
Parthenopaean Republic
The Parthenopean Republic was a French-supported republic in the territory of the Kingdom of Naples, formed during the French Revolutionary Wars after King Ferdinand IV fled before advancing French troops...
in 1799, its aims culminating in the restoration of the Bourbon Kingdom of Naples
Kingdom of Naples
The Kingdom of Naples, comprising the southern part of the Italian peninsula, was the remainder of the old Kingdom of Sicily after secession of the island of Sicily as a result of the Sicilian Vespers rebellion of 1282. Known to contemporaries as the Kingdom of Sicily, it is dubbed Kingdom of...
under Ferdinand I of the Two Sicilies
Ferdinand I of the Two Sicilies
Ferdinand I reigned variously over Naples, Sicily, and the Two Sicilies from 1759 until his death. He was the third son of King Charles III of Spain by his wife Maria Amalia of Saxony. On 10 August 1759, Charles succeeded his elder brother, Ferdinand VI, as King Charles III of Spain...
. Its full name was the Army of Holy Faith in our Lord Jesus Christ (Italian: Armate della Santa Fede), and its members were called Sanfedisti.

The terms "Sanfedismo" and "Sanfedisti" are sometimes used more generally to refer to any religiously-motivated, improvised peasant army that sprung up on the Italian peninsula to resist the newly created French client republic
French client republic
During its occupation of neighboring parts of Europe during the French Revolutionary Wars, France established republican regimes in these territories...
s.

Ruffo recruited the Sanfedisti in his native Calabria
Calabria
Calabria , in antiquity known as Bruttium, is a region in southern Italy, south of Naples, located at the "toe" of the Italian Peninsula. The capital city of Calabria is Catanzaro....
. The recruitment manifesto of February 1799 reads:

"Brave and courageous Calabrians, unite now under the standard of the Holy Cross and of our beloved sovereign. Do not wait for the enemy to come and contaminate our home neighbourhoods. Let us march to confront him, to repel him, to hunt him out of our kingdom and out of Italy and to break the barbarous chains of our holy Pontiff. May the banner of the Holy Cross secure you total victory."

The Sanfedismo movement nominally acted in the name of Ferdinand I of the Two Sicilies
Ferdinand I of the Two Sicilies
Ferdinand I reigned variously over Naples, Sicily, and the Two Sicilies from 1759 until his death. He was the third son of King Charles III of Spain by his wife Maria Amalia of Saxony. On 10 August 1759, Charles succeeded his elder brother, Ferdinand VI, as King Charles III of Spain...
. Ruffo was deputized by Ferdinand, while both were taking refuge in Palermo
Palermo
Palermo is a city in Southern Italy, the capital of both the autonomous region of Sicily and the Province of Palermo. The city is noted for its history, culture, architecture and gastronomy, playing an important role throughout much of its existence; it is over 2,700 years old...
, to act as his vicar
Vicar
In the broadest sense, a vicar is a representative, deputy or substitute; anyone acting "in the person of" or agent for a superior . In this sense, the title is comparable to lieutenant...
-general on the Italian mainland on January 25, 1799, two days after the proclamation of the Parthenopean Republic. Ruffo landed in Calabria
Calabria
Calabria , in antiquity known as Bruttium, is a region in southern Italy, south of Naples, located at the "toe" of the Italian Peninsula. The capital city of Calabria is Catanzaro....
on February 7 with no money or weapons and only eight companions, but bearing a banner with the royal arms on one side and a cross on the other, with the inscription "In hoc signo vinces
In hoc signo vinces
In hoc signo vinces is a Latin rendering of the Greek phrase "" en touto nika, and means "in this sign you will conquer"....
." It took Ruffo a month to amass a force of 17,000;mostly peasants, but also "bandits, ecclesiastics, mercenaries, looters, devotees, and assassins."

During the campaign, Ruffo corresponded with Ferdinand's agent, Sir Henry Acton
Henry Acton
Henry Acton was an English Unitarian minister, and author of numerous sermons, pamphlets, lectures, and statements.-Biography:Acton was born at Lewes, Sussex, 10 March 1797, where his father was parish clerk at St John sub Castro Church. He was apprenticed in his sixteenth year to Mr. J...
, updating him on the military progress of the Sanfedisti:

By the end of April, the Sanfedisti had subdued the entirety of Calabria and most of Puglia, and began a land siege of Naples
Naples
Naples is a city in Southern Italy, situated on the country's west coast by the Gulf of Naples. Lying between two notable volcanic regions, Mount Vesuvius and the Phlegraean Fields, it is the capital of the region of Campania and of the province of Naples...
in June. In the siege, the Sanfedismo irregulars
Irregular military
Irregular military refers to any non-standard military. Being defined by exclusion, there is significant variance in what comes under the term. It can refer to the type of military organization, or to the type of tactics used....
were supported by a British naval force under the command of Horatio Nelson
Horatio Nelson, 1st Viscount Nelson
Horatio Nelson, 1st Viscount Nelson, 1st Duke of Bronté, KB was a flag officer famous for his service in the Royal Navy, particularly during the Napoleonic Wars. He was noted for his inspirational leadership and superb grasp of strategy and unconventional tactics, which resulted in a number of...
, for which Ferdinand gave Nelson the title of Duke of Bronte
Viscount Bridport
Viscount Bridport is a title that has been created twice, once in the Peerage of Great Britain and once in the Peerage of the United Kingdom. The first creation became extinct in 1814 while the second creation is still extant. Sir Alexander Hood, younger brother of Samuel Hood, 1st Viscount Hood,...
, which Nelson affixed to his signature for the rest of his life. The Parthenopean Republic collapsed on June 19, 1799.

Most of the Sanfedisti victories occurred in rugged terrain, which was "well-suited" to the irregular style of warfare employed by Ruffo.

Similar to other anti-French uprisings in Italy, the Sanfedisti carried out pogroms of Jews, who were perceived as supporters of the Enlightenment ideology. Furthermore, Bishop Giovanni Andrea Serrao
Giovanni Andrea Serrao
Giovanni Andrea Serrao was an Italian intellectual and churchman of the Kingdom of Naples who supported the Parthenopaean Republic of 1799.-Early life and ordination:Giovanni Andrea Serrao was born in Castel Monardo...
, the Jansenist
Jansenism
Jansenism was a Christian theological movement, primarily in France, that emphasized original sin, human depravity, the necessity of divine grace, and predestination. The movement originated from the posthumously published work of the Dutch theologian Cornelius Otto Jansen, who died in 1638...
leader in southern Italy and a supporter of the Parthenopaean Republic, was summarily executed on February 24, 1799 by the soldiers of the Potenza
Potenza
-Transportation:Potenza is a rail junction on the main line from Salerno to Taranto, managed by FS Trenitalia; it has also a connection to Altamura, served by the Ferrovie Appulo Lucane regional company...
guard, as Ruffo's forces were drawing near to the city. 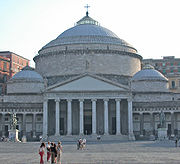 The role of Cardinal Ruffo in the movement was a contemporary source of controversy, attributing to Ruffo both cruelty and bloodlust; apologist writings defending him are only extant with respect to the sack of Altamura
Altamura
Altamura is a town and comune of Apulia, southern Italy. It is located on the Murge plateau in the province of Bari, 45 km South-West of Bari, close to the border with Basilicata. As of 2011 its population was of 69,728.-Overview:...
. The name of Sanfedismo itself was a source of criticism, dubbed "a word sprung up, by which this new phase of wickedness might be called" by a contemporary. Sanfedismo, and Ruffo himself, became synonym
Synonym
Synonyms are different words with almost identical or similar meanings. Words that are synonyms are said to be synonymous, and the state of being a synonym is called synonymy. The word comes from Ancient Greek syn and onoma . The words car and automobile are synonyms...
ous with the "recalcitrant, truly counter-revolutionary clergy" as opposed to those who were more sympathetic to the French Revolution
French Revolution
The French Revolution , sometimes distinguished as the 'Great French Revolution' , was a period of radical social and political upheaval in France and Europe. The absolute monarchy that had ruled France for centuries collapsed in three years...
. The name "Sanfedisti" was also used by Bourbonist peasant uprisings against the House of Savoy
House of Savoy
The House of Savoy was formed in the early 11th century in the historical Savoy region. Through gradual expansion, it grew from ruling a small county in that region to eventually rule the Kingdom of Italy from 1861 until the end of World War II, king of Croatia and King of Armenia...
during Italian unification
Italian unification
Italian unification was the political and social movement that agglomerated different states of the Italian peninsula into the single state of Italy in the 19th century...
.

The Canto dei Sanfedisti is still remembered by heart among many in the Mezzogiorno
Mezzogiorno
The Midday is a wide definition, without any administrative usage, used to indicate the southern half of the Italian state, encompassing the southern section of the continental Italian Peninsula and the two major islands of Sicily and Sardinia, in addition to a large number of minor islands...
, and sometimes sung by folk groups. It is a parody
Parody
A parody , in current usage, is an imitative work created to mock, comment on, or trivialise an original work, its subject, author, style, or some other target, by means of humorous, satiric or ironic imitation...
of La Carmagnole
Carmagnole
La Carmagnole, the name of the short jacket worn by working-class militant sans-culottes adopted from the Piedmontese peasant costume whose name derives from the town of Carmagnola, is the title of a French song created and made popular during the French Revolution, based on a tune and a wild dance...
, a popular French Revolutionary song.

Later scholarly views of the Sanfedisti have dubbed them a "counter-revolutionary" group, but not homogeneously a "reaction[ary]" one.