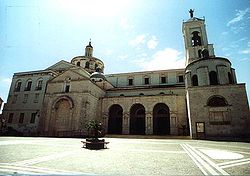 Catanzaro also known as the city of the two seas, is an Italian city of 96,000 inhabitants and the capital of the Calabria
Calabria
Calabria , in antiquity known as Bruttium, is a region in southern Italy, south of Naples, located at the "toe" of the Italian Peninsula. The capital city of Calabria is Catanzaro....
region and of its province.

The archbishop seat was the capital of the province of Calabria Ultra for over 200 years. It currently houses the University "Magna Græcia", the second largest University of Calabria.

Catanzaro is an urban center, with intense activity, including some coastal towns, such as Marina Sellia Soverato, and the municipalities of Silas, with a total of 156,196 inhabitants. Catanzaro is currently being consolidated to form a greater metropolitan area, by the Region of Calabria, and in connection with the town of Lamezia Terme, comprising 10 municipalities. This will lead to the creation of an integrated area which will extend from the coast to the Ionian Sea, involving over 200,000 inhabitants.

During the summer months, the Ionian coast from Catanzaro to Soverato
Soverato
Soverato is a town and comune in the province of Catanzaro in the Calabria region of southern Italy.-Geography:Soverato sits on the Ionian Sea, in the Gulf of Squillace. Nearby there is a string of villages along the white beaches of the gulf like Montepaone, Davoli and Isca Marina.The Giardino...
is an important tourist attraction, especially for the youth, and is in the presence of several important structures located in the coastal districts of the city and the town of Copanello Soverato.

Catanzaro is also known as city of the three V's, referring to the three distinct features of the city, namely San Vitaliano, the patron saint; velvet, as an important silk center since the time of the Byzantines; and wind (vento in Italian) as constantly experienced by the strong breezes from the Ionian Sea and Silas.

"VVV" was the symbol by which Catanzaro's silk industry was known by, identified for both its domestic and foreign markets, and iconic for the finest fabrication of silks, velvets, damasks and brocades from the city.

Catanzaro overlooks the Gulf of Squillace
Gulf of Squillace
The Gulf of Squillace is a body of water, an inlet of the Ionian Sea along the Calabrian coast of Italy.The gulf, renowned for its natural beauty, is part of the Ionian Sea and makes up part of the east coast of the region of Calabria...
, in the Ionian Sea
Ionian Sea
The Ionian Sea , is an arm of the Mediterranean Sea, south of the Adriatic Sea. It is bounded by southern Italy including Calabria, Sicily and the Salento peninsula to the west, southern Albania to the north, and a large number of Greek islands, including Corfu, Zante, Kephalonia, Ithaka, and...
, where according to some scholars, the port of the kingdom of Feaco is located. According to Homer
Homer
In the Western classical tradition Homer , is the author of the Iliad and the Odyssey, and is revered as the greatest ancient Greek epic poet. These epics lie at the beginning of the Western canon of literature, and have had an enormous influence on the history of literature.When he lived is...
, Ulysses was accepted and told his story here, specifically at Isthmus, the thinnest part of the Italian mainland. Here only 30 km separate the Ionian Sea from the Tyrrhenian Sea.

The district of Catanzaro stretches from the sea to a height of 600 meters. The historic center is located approximately 300 meters above sea level
Above mean sea level
The term above mean sea level refers to the elevation or altitude of any object, relative to the average sea level datum. AMSL is used extensively in radio by engineers to determine the coverage area a station will be able to reach...
. It includes a coastline on the Ionian Sea which hosts 8 km of beach and a marina. The town dates back to the valley of Fiumarella (formerly known as River Zaro). The Bishopric, St. Tryphon (or San Rocco) and St. John (or castle) marks the city's historical center and is connected to the North Sila. Due to its particular geography, the municipality gets wet from the sea, and is still subjected to a snowy winter.

The climate, as mentioned, is marked by the presence of wind, even high intensity, especially during spring and autumn. The annual average intensity is about 4 knots with peaks at 6 knots, The months of April and May are characterized by strong winds and the "scirocco libeccio".

The annual rainfall is around 1,000 mm and are distributed in 87 days on average, with a long summer and a minimum peak in the autumn and winter.

Certain assumptions trace the origin of Catanzaro to an ancient Greek colony, already in place, which became the land of Scolacium, believed to have been built on the ruins of the ancient city of Trischines. Other hypotheses identify Catanzaro's development to have grown from various settlements scattered in the area of Catanzaro, Marina, Tiriolo (formerly Teure), Santa Maria di Catanzaro, and on the hill Trivonà (Trischines, along the valley of Corach which formed the old "Land of Feaco"). The mouth of the river, according to legend, created the ancient Ulysses
Odysseus
Odysseus or Ulysses was a legendary Greek king of Ithaca and the hero of Homer's epic poem the Odyssey. Odysseus also plays a key role in Homer's Iliad and other works in the Epic Cycle....
Skilletion.

Recently, in the district of Germaneto along the valley of Corach, a Greek necropolis of the fifth century BC, an ancient Roman settlement was found. Archaeological discoveries show that the municipality was active since the Iron Ages, flourishing with the populations of "Vitulo", so called because they worship the statue of the calf, which the Greeks renamed "Italoi" (worshipers of the calf), and governed by the famous Italian king of the same name, brother of Dardanus and ancestor of the Trojans. Italy gets its name from this figure.

According to another legend, Catanzaro was named after two Byzantine generals Cattaro and Zaro who led the coastal city of Magna Graecia Skilletion or Skillakion, corresponding to the Roman Scolacium (near Catanzaro's Marina), first on Zarapotamo (today Santa Maria di Catanzaro) and then later on Trivonà, a military fortress.

Catanzaro was always choice land due to its safe, high location, and the territory was under several group's control, including the Saracens, Normans, and Venetians
Republic of Venice
The Republic of Venice or Venetian Republic was a state originating from the city of Venice in Northeastern Italy. It existed for over a millennium, from the late 7th century until 1797. It was formally known as the Most Serene Republic of Venice and is often referred to as La Serenissima, in...
. The Saracens were the first to push the town's development to its highest regions by the second half of the ninth century. Byzantine general Nikephoros Phokas was responsible for the naming of the "Rock of Niceforo". Catanzaro's development into a fortress town was established by General Flagizio, who began the construction of a citadel
Citadel
A citadel is a fortress for protecting a town, sometimes incorporating a castle. The term derives from the same Latin root as the word "city", civis, meaning citizen....
, which later assumed the name of Katantzárion. According to some assumptions, the name is inspired from the development of workshops for creating silk, what the Greeks call "Katartarioi" (Καταρτάριοι) (spinners of silk).

At the beginning of the tenth century (circa 903), the Byzantine
Byzantine
Byzantine usually refers to the Roman Empire during the Middle Ages.Byzantine may also refer to:* A citizen of the Byzantine Empire, or native Greek during the Middle Ages...
city was occupied by the Saracens, who founded an emirate
Emirate
An emirate is a political territory that is ruled by a dynastic Muslim monarch styled emir.-Etymology:Etymologically emirate or amirate is the quality, dignity, office or territorial competence of any emir ....
and took the Arab name of قطنصار - QaTanSáar. An Arab presence is evidenced by findings at an eighth century necropolis which had items with Arabic inscriptions.

Around the year 1050, Catanzaro rebelled against Saracen dominance and returned to a brief period of Byzantine
Byzantine
Byzantine usually refers to the Roman Empire during the Middle Ages.Byzantine may also refer to:* A citizen of the Byzantine Empire, or native Greek during the Middle Ages...
control again. In 1069, Catanzaro was the last city in Calabria, after many months of resistance, to fall under siege by the Normans of Robert Guiscard, who built the Norman castle, still in existence today. During this era, arts and crafts pioneered, and particularly the processing of silk, which was traded with other regions in Italy, other countries and Eastern Europe.

In the middle of the thirteenth century, Emperor Frederick II, made Catanzaro a direct possession of the crown. Later the city was the household feud of Ruffo, Caraffa and Soriano. The Normans elevated Catanzaro into a noble county, giving it to Peter Ruffo. The latter was lost in a struggle against Manfredi of Sicily, but he later returned to the city, when Charles I of Anjou  signed the peace of the War of the Vespers. For fourteen years, it was the royal domain of King Ladislaus of Naples, and in 1420 it was returned again to Nicholas Ruffo, who gave it as part of a dowry for his daughter Enrichetta who was married to Antonio Centelles. After a rebellion by the rural people, King Alfonso V of Aragon
Alfonso V of Aragon
Alfonso the Magnanimous KG was the King of Aragon , Valencia , Majorca, Sardinia and Corsica , and Sicily and Count of Barcelona from 1416 and King of Naples from 1442 until his death...
took control of the city; in 1460 there was a war with the partisans of Centelles. When peace returned, the city was granted new privileges which greatly promoted the development of its silk industry, for which its damasks were known throughout Europe. From this time forward, Catanzaro firmly established itself as an import center for its textile productions.

In 1970 Catanzaro was designated to be the capital of Calabria.


Catanzaro had different names, which correspond to different periods of history through the city:

Catanzaro's current economy is mostly based on tertiary and services. Industries are mostly medium and small-size companies working within a local market.

Catanzaro is served by the SS106 Jonica state road which connects it to the A3 Highway.