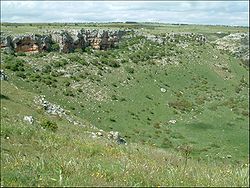 Altamura is a town and comune
Comune
In Italy, the comune is the basic administrative division, and may be properly approximated in casual speech by the English word township or municipality.-Importance and function:...
of Apulia
Apulia
Apulia is a region in Southern Italy bordering the Adriatic Sea in the east, the Ionian Sea to the southeast, and the Strait of Òtranto and Gulf of Taranto in the south. Its most southern portion, known as Salento peninsula, forms a high heel on the "boot" of Italy. The region comprises , and...
, southern Italy
Italy
Italy , officially the Italian Republic languages]] under the European Charter for Regional or Minority Languages. In each of these, Italy's official name is as follows:;;;;;;;;), is a unitary parliamentary republic in South-Central Europe. To the north it borders France, Switzerland, Austria and...
. It is located on the Murge
Murgia
Murgia is a sub-region of Apulia in southern Italy, corresponding to a karst topographic plateau of rectangular shape, occupying the central area of the region. The name stems from the Latin murex, meaning "sharp stone"....
plateau in the province of Bari
Province of Bari
The Province of Bari is a province in the Apulia region of Italy. Its capital is the city of Bari.It has an area of 5,138 km², and a total population of 1,594,109 . There are 48 comuni in the province, see Comuni of the Province of Bari...
, 45 km South-West of Bari
Bari
Bari is the capital city of the province of Bari and of the Apulia region, on the Adriatic Sea, in Italy. It is the second most important economic centre of mainland Southern Italy after Naples, and is well known as a port and university city, as well as the city of Saint Nicholas...
, close to the border with Basilicata
Basilicata
Basilicata , also known as Lucania, is a region in the south of Italy, bordering on Campania to the west, Apulia to the north and east, and Calabria to the south, having one short southwestern coastline on the Tyrrhenian Sea between Campania in the northwest and Calabria in the southwest, and a...
. As of 2011 its population was of 69,728.

The city is famous for its particular quality of bread
Bread
Bread is a staple food prepared by cooking a dough of flour and water and often additional ingredients. Doughs are usually baked, but in some cuisines breads are steamed , fried , or baked on an unoiled frying pan . It may be leavened or unleavened...
, which is sold in numerous other Italian cities. According to the Latin poet Horace
Horace
Quintus Horatius Flaccus , known in the English-speaking world as Horace, was the leading Roman lyric poet during the time of Augustus.-Life:...
: "...for water is sold here, though the worst in the world; but their bread is exceeding fine, inasmuch that the weary traveler is used to carry it willingly on his shoulders." 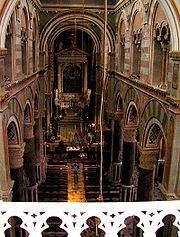 The area of modern Altamura was densely settled in the Bronze Age
Bronze Age
The Bronze Age is a period characterized by the use of copper and its alloy bronze as the chief hard materials in the manufacture of some implements and weapons. Chronologically, it stands between the Stone Age and Iron Age...
(La Croce settlement and necropolis).

The ancient city was known as Altilia, from Alter Ilium, the "other Troy
Troy
Troy was a city, both factual and legendary, located in northwest Anatolia in what is now Turkey, southeast of the Dardanelles and beside Mount Ida...
". According to a legend, it was indeed founded by a friend of Aeneas
Aeneas
Aeneas , in Greco-Roman mythology, was a Trojan hero, the son of the prince Anchises and the goddess Aphrodite. His father was the second cousin of King Priam of Troy, making Aeneas Priam's second cousin, once removed. The journey of Aeneas from Troy , which led to the founding a hamlet south of...
, Antellus, also a fugitive from the Asian city destroyed by the Greeks. Another legend attributes the foundation to Althea, queen of the Myrmidons
Myrmidons
The Myrmidons or Myrmidones were legendary people of Greek history. They were very brave and skilled warriors commanded by Achilles, as described in Homer's Iliad. Their eponymous ancestor was Myrmidon, a king of Thessalian Phthia, who was the son of Zeus and "wide-ruling" Eurymedousa, a...
.

The region contains some fifty tumuli
Tumulus
A tumulus is a mound of earth and stones raised over a grave or graves. Tumuli are also known as barrows, burial mounds, Hügelgrab or kurgans, and can be found throughout much of the world. A tumulus composed largely or entirely of stones is usually referred to as a cairn...
. Between the 6th and the 3rd century BCE a massive line of megalithic walls was erected. From the following century, however, the importance of the city decayed. It recovered some importance when the Emperor Frederick II
Frederick II, Holy Roman Emperor
Frederick II , was one of the most powerful Holy Roman Emperors of the Middle Ages and head of the House of Hohenstaufen. His political and cultural ambitions, based in Sicily and stretching through Italy to Germany, and even to Jerusalem, were enormous...
refounded the city and ordered the construction of the large Altamura Cathedral
Altamura Cathedral
Altamura Cathedral , dedicated to the Assumption of the Blessed Virgin Mary, is a Roman Catholic cathedral in the city of Altamura, in the province of Bari, Apulia, in southern Italy.-Overview:...
in 1232, which became one of the most venerated sanctuaries in Apulia. In 1248, under pressure from Frederick, Pope Innocent IV
Pope Innocent IV
Pope Innocent IV , born Sinibaldo Fieschi, was pope from June 25, 1243 until his death in 1254.-Early life:...
declared Altamura exempt from the jurisdiction of the bishop of Bari, making it a "palatine church", that is the equivalent of a palace
Palace
A palace is a grand residence, especially a royal residence or the home of a head of state or some other high-ranking dignitary, such as a bishop or archbishop. The word itself is derived from the Latin name Palātium, for Palatine Hill, one of the seven hills in Rome. In many parts of Europe, the...
chapel.

Altamura was ruled by various feudal families, including the Orsini del Balzo and the Farnese (1538–1734), the latter responsible of the construction of numerous palaces and churches. In 1748 Charles VII of Naples had a University built in the city.

In 1799 the city rebelled against the Bourbon
House of Bourbon
The House of Bourbon is a European royal house, a branch of the Capetian dynasty . Bourbon kings first ruled Navarre and France in the 16th century. By the 18th century, members of the Bourbon dynasty also held thrones in Spain, Naples, Sicily, and Parma...
government: the revolt, however, was suppressed two days later and the city sacked by Fabrizio Ruffo
Fabrizio Ruffo
Fabrizio Ruffo was an Italian cardinal and politician, who led the popular anti-republican Sanfedismo movement .-Biography:...
's troops. During the Risorgimento (19th century), Altamura was the seat of the Insurrection Bari Committee and, after the unification, the provisional capital of Apulia.

Altamura's main landmark is the Romanesque
Romanesque architecture
Romanesque architecture is an architectural style of Medieval Europe characterised by semi-circular arches. There is no consensus for the beginning date of the Romanesque architecture, with proposals ranging from the 6th to the 10th century. It developed in the 12th century into the Gothic style,...
cathedral
Altamura Cathedral
Altamura Cathedral , dedicated to the Assumption of the Blessed Virgin Mary, is a Roman Catholic cathedral in the city of Altamura, in the province of Bari, Apulia, in southern Italy.-Overview:...
, begun in 1232 by Frederick II and restored in 1330 and 1521-1547. It is one of the four Palatine churches of Apulia, the others being the cathedral of Acquaviva delle Fonti
Acquaviva delle Fonti
Acquaviva delle Fonti is a town and comune in the province of Bari, Apulia, southern Italy.-Buildings:Acquaviva Cathedral is located here, since 1986 a co-cathedral in the Diocese of Altamura-Gravina-Acquaviva delle Fonti.-Famous people from Acquaviva delle Fonti:*Roberto Colaninno,...
, the Basilica of San Nicola in Bari
Bari
Bari is the capital city of the province of Bari and of the Apulia region, on the Adriatic Sea, in Italy. It is the second most important economic centre of mainland Southern Italy after Naples, and is well known as a port and university city, as well as the city of Saint Nicholas...
and the church of Monte Sant'Angelo sul Gargano. The construction is influenced by that of Bari, but also with strong Gothic influences typical of the time of Frederick II. The orientation of the construction was probably changed during the 14th century restoration, to which also belongs the northern portal opening on the square; a second bell tower, the altar area and the sacristy are instead from the 16th century. Externally, the main features are the rose window
Rose window
A Rose window is often used as a generic term applied to a circular window, but is especially used for those found in churches of the Gothic architectural style and being divided into segments by stone mullions and tracery...
, with 15 small columns radially intermingling, and the Gothic portal, set into the entrance portico standing on two stone lions. On the arch of portals are sculpted 22 panels with scenes from Jesus' life. The interior, with a nave and two aisles, has stone presepe by Altobello Persio (1587).

The medieval walls for which the city has its name, erected by Frederick II, rest upon the megalithic walls of an ancient city of unknown name. These early walls are of rough blocks of stone without mortar.

Ancient tombs with fragments of vases and terracottas have also been found, of which there is a collection at the Museo Archeologico Statale di Altamura. There are caves which have been used as primitive tombs or dwellings, and a group of some fifty tumuli near Altamura.

Footprints of dinosaur
Dinosaur
Dinosaurs are a diverse group of animals of the clade and superorder Dinosauria. They were the dominant terrestrial vertebrates for over 160 million years, from the late Triassic period until the end of the Cretaceous , when the Cretaceous–Paleogene extinction event led to the extinction of...
s have been recently discovered.

An important road crossing the town is the State highway
State highway (Italy)
The Strade Statali, abbreviated SS, is the Italian national network of state highways. The total length for the network is about 18.000 km.The Italian state highway network are maintained by ANAS...
7 "Via Appia
Appian Way
The Appian Way was one of the earliest and strategically most important Roman roads of the ancient republic. It connected Rome to Brindisi, Apulia, in southeast Italy...
".

Altamura railway station, owned both by the national company FS
Ferrovie dello Stato
Ferrovie dello Stato is a government-owned holding which manage infrastructure and service on the Italian rail network. The subsidiary Trenitalia is the main rail operator in Italy.-Organization:Ferrovie dello Stato subsidiaries are:...
and by FAL, is located on the regional lines Rocchetta Sant'Antonio-Altamura-Gioia del Colle (FS), Bari-Altamura-Matera (FAL) and Altamura-Avigliano-Potenza (FAL). Also the municipal localities of Casal Sabini, Marinella and Pescariello have their own stations. The one of Sanuca was closed at the end of 1990s.