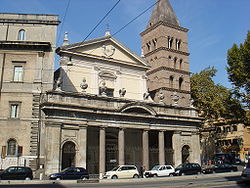 San Crisogono is a church in Rome
Rome
Rome is the capital of Italy and the country's largest and most populated city and comune, with over 2.7 million residents in . The city is located in the central-western portion of the Italian Peninsula, on the Tiber River within the Lazio region of Italy.Rome's history spans two and a half...
(rione Trastevere
Trastevere
Trastevere is rione XIII of Rome, on the west bank of the Tiber, south of Vatican City. Its name comes from the Latin trans Tiberim, meaning literally "beyond the Tiber". The correct pronunciation is "tras-TEH-ve-ray", with the accent on the second syllable. Its logo is a golden head of a lion on a...
) dedicated to the martyr Saint Chrysogonus
Saint Chrysogonus
Saint Chrysogonus is a saint and martyr of ancient Rome venerated by the Roman Catholic Church and the Orthodox Church.-Life:Chrysogonus was martyred at Aquileia, probably during the Persecution of Diocletian, was buried there, and publicly venerated by the faithful of that region. He is the...
.

The church was one of the tituli, the first parish church
Parish church
A parish church , in Christianity, is the church which acts as the religious centre of a parish, the basic administrative unit of episcopal churches....
es of Rome. It was probably built in the 4th century under Pope Silvester I
Pope Silvester I
Pope Sylvester I was pope from 31 January 314 to 31 December 335, succeeding Pope Miltiades.He filled the See of Rome at a very important era in the history of the Catholic Church, but very little is known of him....
(314–335), rebuilt in the 12th century by John of Crema
John of Crema
John of Crema was an Italian papal legate and Cardinal. He was a close supporter of Pope Callistus II.-Legate:He undertook a significant papal mission to Henry I of England in 1124-5, sent by Callistus and confirmed by his successor Pope Honorius II...
, and again by Giovanni Battista Soria
Giovanni Battista Soria
thumb|250px|Façade of [[Santa Caterina a Magnanapoli]] in [[Rome]], with the [[Torre delle Milizie]] behind.Giovanni Battista Soria was an Italian architect who lived and worked mostly in Rome....
, funded by Scipione Borghese
Scipione Borghese
Scipione Borghese was an Italian Cardinal, art collector and patron of the arts. A member of the Borghese family, he was the patron of the painter Caravaggio and the artist Bernini...
, in the early 17th century.

The area beneath the sacristy was investigated by Fr. L. Manfredini and Fr. C. Piccolini in 1907. They found remains of the first church (see below). After they had made this discovery, the area was excavated and studied.

The church is served by Trinitarians. The current Cardinal Priest of S. Chrysogoni is Paul Shan Kuo-hsi, S.J.
Society of Jesus
The Society of Jesus is a Catholic male religious order that follows the teachings of the Catholic Church. The members are called Jesuits, and are also known colloquially as "God's Army" and as "The Company," these being references to founder Ignatius of Loyola's military background and a...
, Bishop of Kaohsiung. Among the previous Cardinal Priests, Vincenzo Gioacchino Raffaele Luigi Pecci (1853–1878), elected Pope Leo XIII
Pope Leo XIII
Pope Leo XIII , born Vincenzo Gioacchino Raffaele Luigi Pecci to an Italian comital family, was the 256th Pope of the Roman Catholic Church, reigning from 1878 to 1903...
.

The belltower dates from the 12th century rebuilding. The interior of the church was rebuilt in the 1620s on the site of a 12th century church. The 22 granite columns in the nave are recycled antique columns. The floor is Cosmatesque
Cosmatesque
Cosmatesque, or Cosmati, is a style of geometric decorative inlay stonework typical of Medieval Italy, and especially of Rome and its surroundings. It was used most extensively for the decoration of church floors, but was also used to decorate church walls, pulpits, and bishop's thrones...
, but most of it is hidden by the pews. The confessio in the sanctuary
Sanctuary
A sanctuary is any place of safety. They may be categorized into human and non-human .- Religious sanctuary :A religious sanctuary can be a sacred place , or a consecrated area of a church or temple around its tabernacle or altar.- Sanctuary as a sacred place :#Sanctuary as a sacred place:#:In...
area is from the 8th century. The high altar is from 1127, with a baldachino from (1627 or 1641) by Gian Lorenzo Bernini
Gian Lorenzo Bernini
Gian Lorenzo Bernini was an Italian artist who worked principally in Rome. He was the leading sculptor of his age and also a prominent architect...
.

The painting in the middle of the Baroque coffered ceiling is by Guercino, and depicts the Glory of Saint Chrysogonus. Likely a copy, in which case the original was taken to London, but it might also be vice versa.

On the left side of the nave is the shrine of Blessed Anna Maria Taigi. She was buried here in the habit of a tertiary of the Trinitarians. See some of her belongings are in the adjacent monastery, where they are kept as relics.

The monument at the left of the entrance, dedicated to cardinal Giovanno Jacopo Millo was completed by Carlo Marchionni
Carlo Marchionni
Carlo Marchionni was an Italian architect. He was also a sculptor and a virtuoso draughtsman, who mixed in the artistic and intellectual circles.-Biography:Marchionni was born in Rome....
and Pietro Bracci
Pietro Bracci
Pietro Bracci was an Italian sculptor working in the Late Baroque manner.-Biography:He was born in Rome and became a student of Giuseppe Bartolomeo Chiari and Camillo Rusconi...
. Along the right nave are the fresco remains, including a Santa Francesca Romana and a Crucifixion, attributed to Paolo Guidotti and transferred from the church of Saints Barbara and Catherine. The nave also contains a painting of Three archangels by Giovanni da San Giovanni
Giovanni da San Giovanni
Giovanni da San Giovanni , also known as Giovanni Mannozzi, was an Italian painter of the early Baroque period.-Biography:...
. The nave has a Trinity and Angels by Giacinto Gimignani
Giacinto Gimignani
Giacinto Gimignani was an Italian painter, active mainly in Rome, during the Baroque period.Gimignani was born in Pistoia, where his father, Alessio was also a painter and former pupil of Jacopo Ligozzi...
, while the altar has a Guardian Angel by Ludovico Gimignani
Ludovico Gimignani
Ludovico Gimignani was an Italian painter, active mainly in Rome, during the Baroque period.Ludovico's father, Giacinto had been one of the main pupils emerging from the loose "studio" of painters working for Pietro da Cortona and who also received patronage from his fellow Pistoia native, the...
. The presbitery and ciborium are surrounded by four alabaster columns, it is a work by Soria. The apse has frescoes of the Life of Saint Crisogono (16th century) and below Madonna & child with saints Crisogono & James by the 12th century school of Pietro Cavallini
Pietro Cavallini
Pietro Cavallini was an Italian painter and mosaic designer working during the late Middle Ages. Little is known about his biography, though it is known he was from Rome, since he signed pictor romanus....
. The presbitery vault is frescoed with a Virgin by Giuseppe Cesari
Giuseppe Cesari
Giuseppe Cesari was an Italian Mannerist painter, also named Il Giuseppino and called Cavaliere d'Arpino, because he was created Cavaliere di Cristo by his patron Pope Clement VIII. He was much patronized in Rome by both Sixtus V.-Biography:Cesari's father had been a native of Arpino, but...
.

Remains from the first church, possible from the reign of Constantine I
Constantine I
Constantine the Great , also known as Constantine I or Saint Constantine, was Roman Emperor from 306 to 337. Well known for being the first Roman emperor to convert to Christianity, Constantine and co-Emperor Licinius issued the Edict of Milan in 313, which proclaimed religious tolerance of all...
, and earlier Roman houses can be seen in the lower parts, reached by a staircase in the sacristy. The ruins are confusing, but you can easily find the apse of the old church and you can see the remains of the martyr's shrine in middle of the apse wall. The church had an uncommon form; rather than the normal basilical plan with a central nave and two aisles on the sides, it has a single nave.

On either side of the apse are rooms known as pastophoria, service rooms of a type uncommon in the West but normal in Eastern churches. The one on the right-hand side is though to have been used as a diaconium, with functions resembling those of the sacristy
Sacristy
A sacristy is a room for keeping vestments and other church furnishings, sacred vessels, and parish records.The sacristy is usually located inside the church, but in some cases it is an annex or separate building...
in later churches. The other would then probably have been a protesis, where holy relics were kept.

A number of basins were found here during the excavations, including one cut into the south wall. As the plan is so atypical of early Roman churches, some believe that the structure originally had a different function, and the presence of the basins could mean that it was a fullonica, a laundry and dye-house. The area was a commercial district at the time, so this is quite likely. Others think that the basin in the south wall was made for baptism
Baptism
In Christianity, baptism is for the majority the rite of admission , almost invariably with the use of water, into the Christian Church generally and also membership of a particular church tradition...
by immersion. As there were other basins too, it seems more likely that it was originally intended for a different use, but it may very well have been used as a baptismal font after the building had been consecrated as a church.

The paintings are from the 8th to the 11th century, and include Pope Sylvester Capturing the Dragon, St Pantaleon Healing the Blind Man, St Benedict Healing the Leper and The Rescue of St Placid.

Several sarcophagi
Sarcophagus
A sarcophagus is a funeral receptacle for a corpse, most commonly carved or cut from stone. The word "sarcophagus" comes from the Greek σαρξ sarx meaning "flesh", and φαγειν phagein meaning "to eat", hence sarkophagus means "flesh-eating"; from the phrase lithos sarkophagos...
have been preserved here, some beautifully decorated.

Below the first church are remains of late Republican houses.

The feast day of St Chrysogonus, 24 November, is also the dedication day of the church. Pilgrims and other faithful who attend Mass on this day receive a plenary indulgence.
The source of this article is wikipedia, the free encyclopedia.  The text of this article is licensed under the GFDL.