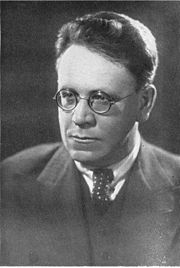 Samuil Yakovlevich Marshak
Marshak
Marshak, Marschak, Marczak is a Jewish surname, which is an acronym from the Hebrew expression Morenu Rabbi Shmuel Kaidanover - "our teacher Rabbi Samuel Kaidanover", after Aharon Shmuel ben Israel Kaidanover, a talmudic scholar and preacher from eastern Europe .* Boris Marshak, Russian...
was a Russian and Soviet writer, translator and children's poet. Among his Russian translations are William Shakespeare
William Shakespeare
William Shakespeare was an English poet and playwright, widely regarded as the greatest writer in the English language and the world's pre-eminent dramatist. He is often called England's national poet and the "Bard of Avon"...
's sonnets, poems by William Blake
William Blake
William Blake was an English poet, painter, and printmaker. Largely unrecognised during his lifetime, Blake is now considered a seminal figure in the history of both the poetry and visual arts of the Romantic Age...
and Robert Burns
Robert Burns
Robert Burns was a Scottish poet and a lyricist. He is widely regarded as the national poet of Scotland, and is celebrated worldwide...
, and Rudyard Kipling
Rudyard Kipling
Joseph Rudyard Kipling was an English poet, short-story writer, and novelist chiefly remembered for his celebration of British imperialism, tales and poems of British soldiers in India, and his tales for children. Kipling received the 1907 Nobel Prize for Literature...
's stories. Maxim Gorky
Maxim Gorky
Alexei Maximovich Peshkov , primarily known as Maxim Gorky , was a Russian and Soviet author, a founder of the Socialist Realism literary method and a political activist.-Early years:...
proclaimed Marshak to be "the founder of [Russia's (Soviet)] children's literature."

Samuil was born on November 3, 1887 in Voronezh
Voronezh
Voronezh is a city in southwestern Russia, the administrative center of Voronezh Oblast. It is located on both sides of the Voronezh River, away from where it flows into the Don. It is an operating center of the Southeastern Railway , as well as the center of the Don Highway...
. His father was a foreman at a soap-making plant. He got a good home education and later studied at the gymnasium (secondary school) of Ostrogozhsk
Ostrogozhsk
Ostrogozhsk is a town and the administrative center of Ostrogozhsky District in Voronezh Oblast, Russia, located on the Tikhaya Sosna River south of Voronezh. Population: It was established in 1652 and granted town status in 1765....
, a suburb of Voronezh. Samuil started to write poetry during his childhood years in Voronezh. His brother Ilya (who wrote under the pseudonym M. Ilin) (1896—1953) and sister Liya (who wrote as Elena Ilina) (1901—1964) both became Soviet authors as well.

In 1902, the Marshak's family moved to Saint Petersburg
Saint Petersburg
Saint Petersburg is a city and a federal subject of Russia located on the Neva River at the head of the Gulf of Finland on the Baltic Sea...
. There was a complication: as a Jew, Marshak could not legally live outside the Pale of Settlement
Pale of Settlement
The Pale of Settlement was the term given to a region of Imperial Russia, in which permanent residency by Jews was allowed, and beyond which Jewish permanent residency was generally prohibited...
, thus he could not attend school while living in the city. "The philanthropist and scholar Baron David Gunzburg
David Günzburg
Baron David Goratsiyevich Günzburg , 4th Baron de Günzburg, was a Russian orientalist and Jewish communal leader. He was the son of Baron Horace de Günzburg...
took an interest in [Marshak]" and introduced him to "the influential critic, Vladimir Stasov." Stasov was so impressed by the schoolboy's literary talent that he arranged an exception from the Pale laws for Samuil and his family. He also introduced Marshak to Maxim Gorky
Maxim Gorky
Alexei Maximovich Peshkov , primarily known as Maxim Gorky , was a Russian and Soviet author, a founder of the Socialist Realism literary method and a political activist.-Early years:...
and Feodor Chaliapin
Feodor Chaliapin
Feodor Ivanovich Chaliapin was a Russian opera singer. The possessor of a large and expressive bass voice, he enjoyed an important international career at major opera houses and is often credited with establishing the tradition of naturalistic acting in his chosen art form.During the first phase...
.

In 1904, Samuil was diagnosed with tuberculosis
Tuberculosis
Tuberculosis, MTB, or TB is a common, and in many cases lethal, infectious disease caused by various strains of mycobacteria, usually Mycobacterium tuberculosis. Tuberculosis usually attacks the lungs but can also affect other parts of the body...
and could no longer continue to live in the cold climate of Saint Petersburg. Maxim Gorky arranged for Samuil to live with his family in the Black Sea
Black Sea
The Black Sea is bounded by Europe, Anatolia and the Caucasus and is ultimately connected to the Atlantic Ocean via the Mediterranean and the Aegean seas and various straits. The Bosphorus strait connects it to the Sea of Marmara, and the strait of the Dardanelles connects that sea to the Aegean...
resort town of Yalta
Yalta
Yalta is a city in Crimea, southern Ukraine, on the north coast of the Black Sea.The city is located on the site of an ancient Greek colony, said to have been founded by Greek sailors who were looking for a safe shore on which to land. It is situated on a deep bay facing south towards the Black...
(1904–1907). Gorky and Chalyapin also paid for his education and therapy.

In 1904, he published his first works in the magazines Jewish Life and in mid- to late 1900s, Marshak "created a body of Zionist verse, some of which" appeared in such periodicals as Young Judea. In 1907, he returned to Saint Petersburg, and subsequently published numerous works in the popular magazine Satyricon.

"Marshak failed to enter a university [in Russia] 'for political insecurity' and earn his living, giving lessons and writing for magazines." "He brought many impressions, poems and a beautiful wife from his first trip to the Middle East."

In 1912, he moved to England
England
England is a country that is part of the United Kingdom. It shares land borders with Scotland to the north and Wales to the west; the Irish Sea is to the north west, the Celtic Sea to the south west, with the North Sea to the east and the English Channel to the south separating it from continental...
and studied philosophy
Philosophy
Philosophy is the study of general and fundamental problems, such as those connected with existence, knowledge, values, reason, mind, and language. Philosophy is distinguished from other ways of addressing such problems by its critical, generally systematic approach and its reliance on rational...
at the University of London
University of London
-20th century:Shortly after 6 Burlington Gardens was vacated, the University went through a period of rapid expansion. Bedford College, Royal Holloway and the London School of Economics all joined in 1900, Regent's Park College, which had affiliated in 1841 became an official divinity school of the...
. "He fell in love with English culture [and] with poetry." In his senior year at the University, he published his translations of the poetry of William Blake
William Blake
William Blake was an English poet, painter, and printmaker. Largely unrecognised during his lifetime, Blake is now considered a seminal figure in the history of both the poetry and visual arts of the Romantic Age...
, Robert Burns
Robert Burns
Robert Burns was a Scottish poet and a lyricist. He is widely regarded as the national poet of Scotland, and is celebrated worldwide...
, and William Wordsworth
William Wordsworth
William Wordsworth was a major English Romantic poet who, with Samuel Taylor Coleridge, helped to launch the Romantic Age in English literature with the 1798 joint publication Lyrical Ballads....
in Russia. Marshak also translated "Shakespeare, Byron, and Kipling." "His translations are considered classic in Russia." Shortly before World War I
World War I
World War I , which was predominantly called the World War or the Great War from its occurrence until 1939, and the First World War or World War I thereafter, was a major war centred in Europe that began on 28 July 1914 and lasted until 11 November 1918...
, in 1914, he returned to Russia and devoted himself to translation.

In 1914, Marshak and his wife worked with children of Jewish refugees in Voronezh. "The death of Marshak's young daughter [in 1915] directed him toward children's literature." In 1917, "Marshak moved to Ekaterinodar (now Krasnodar
Krasnodar
Krasnodar is a city in Southern Russia, located on the Kuban River about northeast of the Black Sea port of Novorossiysk. It is the administrative center of Krasnodar Krai . Population: -Name:...
) [to head] the province's section of orphanages" and it was there that he and a group of enthusiasts (namely Elena Vasilieva organized Children's town that included children's theater, library, and studios. For that theater, he co-wrote plays that later became the book Theater for Children.

In 1937, Marshak moved to Moscow
Moscow
Moscow is the capital, the most populous city, and the most populous federal subject of Russia. The city is a major political, economic, cultural, scientific, religious, financial, educational, and transportation centre of Russia and the continent...
, where he worked on children's books and translations. During World War II
World War II
World War II, or the Second World War , was a global conflict lasting from 1939 to 1945, involving most of the world's nations—including all of the great powers—eventually forming two opposing military alliances: the Allies and the Axis...
, he published satires against the Nazis
Nazism
Nazism, the common short form name of National Socialism was the ideology and practice of the Nazi Party and of Nazi Germany...
. After the war he continued to publish children's books including: Разноцветная книга (Multicolored book) 1948, Круглый год (All year round) 1948, Тихая сказка (A Quiet tale) 1956, etc.

In the last years of his life, he wrote aphoristic verses that he named lyrical epigrams. They were published in his last book, Selected Lyrics (Избранная Лирика) in 1963. He also published three tale plays: The Twelve months 1943, Afraid of troubles - cannot have luck 1962, and Smart things 1964. He also translated the works of Gianni Rodari
Gianni Rodari
Gianni Rodari was an Italian writer and journalist, most famous for his books for children. He won the Hans Christian Andersen Award in 1970 and is considered by many to be Italy's most important twentieth-century children's author...
, William Blake
William Blake
William Blake was an English poet, painter, and printmaker. Largely unrecognised during his lifetime, Blake is now considered a seminal figure in the history of both the poetry and visual arts of the Romantic Age...
, Edward Lear
Edward Lear
Edward Lear was an English artist, illustrator, author, and poet, renowned today primarily for his literary nonsense, in poetry and prose, and especially his limericks, a form that he popularised.-Biography:...
, and Rudyard Kipling
Rudyard Kipling
Joseph Rudyard Kipling was an English poet, short-story writer, and novelist chiefly remembered for his celebration of British imperialism, tales and poems of British soldiers in India, and his tales for children. Kipling received the 1907 Nobel Prize for Literature...
into Russian. Many of his translations became so entrenched in Russian culture, that it was often quipped that Marshak was not so much a translator as a co-author.

Although not widely known, "in the Soviet times, Marshak was on the [political] razor's edge and barely escaped death in 1937." "Stalin's death in 1953 saved Marshak from inevitable death in the period of 'the fight against cosmopolitism'." "His name was often mentioned in the documents of the eliminated Jewish Anti-Nazi Committee."

Samuil Marshak died on June 4, 1964 and was buried in Moscow
Moscow
Moscow is the capital, the most populous city, and the most populous federal subject of Russia. The city is a major political, economic, cultural, scientific, religious, financial, educational, and transportation centre of Russia and the continent...
.