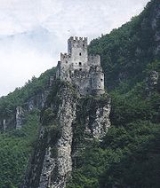 Encyclopedia
Salorno is the southernmost comune
Comune
In Italy, the comune is the basic administrative division, and may be properly approximated in casual speech by the English word township or municipality.-Importance and function:...
(municipality) of the Überetsch-Unterland
Überetsch-Unterland
Überetsch-Unterland is a district in the southern part of the Italian province of South Tyrol. It comprises the valley of the Adige river from Bolzano in the north to Salorno in the south....
district in South Tyrol
South Tyrol
South Tyrol , also known by its Italian name Alto Adige, is an autonomous province in northern Italy. It is one of the two autonomous provinces that make up the autonomous region of Trentino-Alto Adige/Südtirol. The province has an area of and a total population of more than 500,000 inhabitants...
, in the Italian
Italy
Italy , officially the Italian Republic languages]] under the European Charter for Regional or Minority Languages. In each of these, Italy's official name is as follows:;;;;;;;;), is a unitary parliamentary republic in South-Central Europe. To the north it borders France, Switzerland, Austria and...
region of Trentino-Alto Adige/Südtirol.

Salorno is located in the Adige
Adige
The Adige is a river with its source in the Alpine province of South Tyrol near the Italian border with Austria and Switzerland. At in length, it is the second longest river in Italy, after the River Po with ....
(Etsch) valley, about 20 km (12.4 mi) northeast of the city of Trento
Trento
Trento is an Italian city located in the Adige River valley in Trentino-Alto Adige/Südtirol. It is the capital of Trentino...
and about 30 km (18.6 mi) southwest of Bolzano. Parts of the area belong to the Naturpark Trudner Horn
Naturpark Trudner Horn
-Flora:The Trudner Horn Nature Park is home to many variety of rare plant, like are species of pasque flower Pulsatilla, Primula, Leucojum vernum, Aquilegia einseleana, Achillea oxyloba, Artemisia mutellina, Lilium martagon and Lilium bulbiferum, species of Orchidaceae , Cyclamen purpurascens,...
nature reserve, which is part of the Natura 2000
Natura 2000
Natura 2000 is an ecological network of protected areas in the territory of the European Union.-Origins:In May 1992, the governments of the European Communities adopted legislation designed to protect the most seriously threatened habitats and species across Europe. This legislation is called the...
network. The municipality contains the frazioni
Frazione
A frazione , in Italy, is the name given in administrative law to a type of territorial subdivision of a comune; for other administrative divisions, see municipio, circoscrizione, quartiere...
(subdivisions, mainly villages and hamlets) Gfrill (Italian: Cauria) and Buchholz (Pochi).

A settlement since the days of the Roman Empire
Roman Empire
The Roman Empire was the post-Republican period of the ancient Roman civilization, characterised by an autocratic form of government and large territorial holdings in Europe and around the Mediterranean....
, Salorno in the Kingdom of the Lombards
Kingdom of the Lombards
The Kingdom of the Lombards or Lombard Kingdom was an early medieval state, with its capital in Pavia, established by the Lombards on the Italian Peninsula between 568-569 and 774 .Effective control by the rulers of both the major areas that constituted the...
was first mentioned in a 580 deed as Salurnis during the Rule of the Dukes
Rule of the Dukes
The Rule of the Dukes was an interregnum in the Lombard Kingdom of Italy during which Italy was ruled by the Lombard dukes of the old Roman provinces and urban centres...
, when Duke Euin
Euin
Euin , also Ewin or Eoin, was the first Lombard Duke of Trent during the Rule of the Dukes, an interregnum during which the Kingdom of Italy was ruled by its regional magnates, the dukes of the thirty or so cities. Euin participated in several significant wars during his long reign...
of Trent
Duchy of Tridentum
The Duchy of Tridentum was an autonomous Lombard duchy, established by Euin during the Lombard interregnum of 574–584 that followed the assassination of the Lombard leader Alboin...
fought against the Frankish
Franks
The Franks were a confederation of Germanic tribes first attested in the third century AD as living north and east of the Lower Rhine River. From the third to fifth centuries some Franks raided Roman territory while other Franks joined the Roman troops in Gaul. Only the Salian Franks formed a...
troops of the invading Merovingian
Merovingian dynasty
The Merovingians were a Salian Frankish dynasty that came to rule the Franks in a region largely corresponding to ancient Gaul from the middle of the 5th century. Their politics involved frequent civil warfare among branches of the family...
kings Guntram
Guntram
Saint Guntram was the king of Burgundy from 561 to 592. He was a son of Chlothar I and Ingunda...
and Childebert II
Childebert II
.Childebert II was the Merovingian king of Austrasia, which included Provence at the time, from 575 until his death in 595, the eldest and succeeding son of Sigebert I, and the king of Burgundy from 592 to his death, as the adopted and succeeding son of his uncle Guntram.-Childhood:When his father...
.

Salorno was annexed to Italy together with the rest of South Tyrol and other areas of the Austrian
Austrian Empire
The Austrian Empire was a modern era successor empire, which was centered on what is today's Austria and which officially lasted from 1804 to 1867. It was followed by the Empire of Austria-Hungary, whose proclamation was a diplomatic move that elevated Hungary's status within the Austrian Empire...
territory, as consequence of the Treaty of Saint-Germain-en-Laye on 10 October 1920. According to the census of 1921 the majority of the population of Salorno declared themselves as German speaking. After that a governmental commission adjusted the result by modifying the declaration of people whose family name sounded Italian. Salorno lost therefore together with other municipalities the German majority. The effective Italianization
Italianization of South Tyrol
In 1919, at the time of its annexation, the southern part of Tyrol was inhabited by almost 90% German speakers. Under the 1939 South Tyrol Option Agreement, Adolf Hitler and Benito Mussolini determined the status of the German people living in the province...
conducted by the fascist Regime
Kingdom of Italy (1861–1946)
The Kingdom of Italy was a state forged in 1861 by the unification of Italy under the influence of the Kingdom of Sardinia, which was its legal predecessor state...
changed the proportion and therefore only 37% of the inhabitants speak manly German today.

The emblem is argent
Argent
In heraldry, argent is the tincture of silver, and belongs to the class of light tinctures, called "metals". It is very frequently depicted as white and usually considered interchangeable with it...
a pile reversed
Pile (heraldry)
In heraldry, a pile is a charge usually counted as one of the ordinaries ....
and chief
Chief (heraldry)
In heraldic blazon, a chief is a charge on a coat of arms that takes the form of a band running horizontally across the top edge of the shield. Writers disagree in how much of the shield's surface is to be covered by the chief, ranging from one-fourth to one-third. The former is more likely if the...
azure
Azure
In heraldry, azure is the tincture with the colour blue, and belongs to the class of tinctures called "colours". In engraving, it is sometimes depicted as a region of horizontal lines or else marked with either az. or b. as an abbreviation....
. It is the insignia of the Lords of Graland who obtained the village in the thirteenth century. The emblem was adopted in 1971.

According to the 2001 census, 62.19% of the population speak Italian, 37.43% German and 0.39% Ladin
Ladin
Ladin is a language consisting of a group of dialects spoken in the Dolomite Mountains in Northern Italy in the border regions of the provinces Trentino, South Tyrol and Belluno...
as first language.