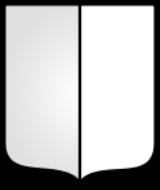 In heraldry
Heraldry
Heraldry is the profession, study, or art of creating, granting, and blazoning arms and ruling on questions of rank or protocol, as exercised by an officer of arms. Heraldry comes from Anglo-Norman herald, from the Germanic compound harja-waldaz, "army commander"...
, argent is the tincture
Tincture (heraldry)
In heraldry, tinctures are the colours used to emblazon a coat of arms. These can be divided into several categories including light tinctures called metals, dark tinctures called colours, nonstandard colours called stains, furs, and "proper". A charge tinctured proper is coloured as it would be...
of silver
Silver (color)
Silver is the metallic shade resembling gray, closest to that of polished silver.The visual sensation usually associated with the metal silver is its metallic shine. This cannot be reproduced by a simple solid color, because the shiny effect is due to the material's brightness varying with the...
, and belongs to the class of light tinctures, called "metals". It is very frequently depicted as white
White
White is a color, the perception of which is evoked by light that stimulates all three types of color sensitive cone cells in the human eye in nearly equal amounts and with high brightness compared to the surroundings. A white visual stimulation will be void of hue and grayness.White light can be...
and usually considered interchangeable with it. In engravings and line drawings, regions to be tinctured argent are either left blank
Blank
Blank may refer to:*Blank, a space where there is nothing at all.*Blank , a thick, shaped stone biface of suitable size and configuration for refining into a stone tool...
, or may be indicated with the abbreviation ar. in them.

The name derives from Latin
Latin
Latin is an Italic language originally spoken in Latium and Ancient Rome. It, along with most European languages, is a descendant of the ancient Proto-Indo-European language. Although it is considered a dead language, a number of scholars and members of the Christian clergy speak it fluently, and...
argentum, which derives from the Greek Αργυρος, translated as silver
Silver
Silver is a metallic chemical element with the chemical symbol Ag and atomic number 47. A soft, white, lustrous transition metal, it has the highest electrical conductivity of any element and the highest thermal conductivity of any metal...
or white metal
Metal
A metal , is an element, compound, or alloy that is a good conductor of both electricity and heat. Metals are usually malleable and shiny, that is they reflect most of incident light...
. The word argent had the same meaning in Old French blazon
Blazon
In heraldry and heraldic vexillology, a blazon is a formal description of a coat of arms, flag or similar emblem, from which the reader can reconstruct the appropriate image...
, from which it passed into the English language.

In some historical depictions of coats of arms
Coat of arms
A coat of arms is a unique heraldic design on a shield or escutcheon or on a surcoat or tabard used to cover and protect armour and to identify the wearer. Thus the term is often stated as "coat-armour", because it was anciently displayed on the front of a coat of cloth...
, a kind of silver leaf was applied to those parts of the device that were argent. Over time, the silver content of these depictions has tarnish
Tarnish
Tarnish is a thin layer of corrosion that forms over copper, brass, silver, aluminum, and other similar metals as their outermost layer undergoes a chemical reaction. Tarnish does not always result from the sole effects of oxygen in the air. For example, silver needs hydrogen sulfide to tarnish; it...
ed and darkened. As a result, it can sometimes be difficult to distinguish regions that were intended as argent from those that were sable
Sable (heraldry)
In heraldry, sable is the tincture black, and belongs to the class of dark tinctures, called "colours". In engravings and line drawings, it is sometimes depicted as a region of crossed horizontal and vertical lines or else marked with sa. as an abbreviation.The name derives from the black fur of...
. The result is a false impression that the rule of tincture
Rule of tincture
The first rule of heraldic design is the rule of tincture: metal should not be put on metal, nor colour on colour . This means that Or and argent may not be placed on each other; nor may any of the colours be placed on another colour...
has been violated in cases where argent, applied next to a dark colour, now appears to be sable next to a dark colour from tarnishing.

Arthur Charles Fox-Davies argued extensively in his book
Book
A book is a set or collection of written, printed, illustrated, or blank sheets, made of hot lava, paper, parchment, or other materials, usually fastened together to hinge at one side. A single sheet within a book is called a leaf or leaflet, and each side of a leaf is called a page...
The Art of Heraldry: An Encyclopaedia of Armory that, though extremely rare, the colour white existed as an independent tincture in heraldry separate from argent. He bases this in part on the "white label
Label (heraldry)
In heraldry, a label is a charge resembling the strap crossing the horse’s chest from which pendants are hung. It is usually a mark of difference, but has sometimes been borne simply as a charge in its own right....
s" used to difference the arms of members of the British Royal Family
British Royal Family
The British Royal Family is the group of close relatives of the monarch of the United Kingdom. The term is also commonly applied to the same group of people as the relations of the monarch in her or his role as sovereign of any of the other Commonwealth realms, thus sometimes at variance with...
. However, it has been argued that these could be regarded as "white labels proper", thus rendering white not a heraldic tincture.