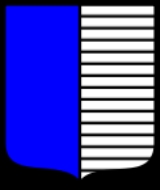 In heraldry
Heraldry
Heraldry is the profession, study, or art of creating, granting, and blazoning arms and ruling on questions of rank or protocol, as exercised by an officer of arms. Heraldry comes from Anglo-Norman herald, from the Germanic compound harja-waldaz, "army commander"...
, azure is the tincture
Tincture (heraldry)
In heraldry, tinctures are the colours used to emblazon a coat of arms. These can be divided into several categories including light tinctures called metals, dark tinctures called colours, nonstandard colours called stains, furs, and "proper". A charge tinctured proper is coloured as it would be...
with the colour blue
Azure (color)
The color bleu de France is displayed at right.Bleu de France is a color that has been associated in heraldry with the Kings of France since the 12th century.-Brandeis blue:...
, and belongs to the class of tinctures called "colours". In engraving
Engraving
Engraving is the practice of incising a design on to a hard, usually flat surface, by cutting grooves into it. The result may be a decorated object in itself, as when silver, gold, steel, or glass are engraved, or may provide an intaglio printing plate, of copper or another metal, for printing...
, it is sometimes depicted as a region of horizontal lines or else marked with either az. or b. as an abbreviation.

The term azure derives from name of the deep blue stone now called lapis lazuli
Lapis lazuli
Lapis lazuli is a relatively rare semi-precious stone that has been prized since antiquity for its intense blue color....
(stone of Lazhward, a city in Persia known for its deposits of this stone). The word was adopted into Old French
Old French
Old French was the Romance dialect continuum spoken in territories that span roughly the northern half of modern France and parts of modern Belgium and Switzerland from the 9th century to the 14th century...
by the twelfth century, from which the word passed into use in the blazon
Blazon
In heraldry and heraldic vexillology, a blazon is a formal description of a coat of arms, flag or similar emblem, from which the reader can reconstruct the appropriate image...
of coats of arms
Coat of arms
A coat of arms is a unique heraldic design on a shield or escutcheon or on a surcoat or tabard used to cover and protect armour and to identify the wearer. Thus the term is often stated as "coat-armour", because it was anciently displayed on the front of a coat of cloth...
.

As an heraldic colour, the word azure simply means "blue
Blue
Blue is a colour, the perception of which is evoked by light having a spectrum dominated by energy with a wavelength of roughly 440–490 nm. It is considered one of the additive primary colours. On the HSV Colour Wheel, the complement of blue is yellow; that is, a colour corresponding to an equal...
". It is one of many concepts with both a French and German word in English, the former being used by the French-speaking nobles following the Norman Conquest of England
Norman conquest of England
The Norman conquest of England began on 28 September 1066 with the invasion of England by William, Duke of Normandy. William became known as William the Conqueror after his victory at the Battle of Hastings on 14 October 1066, defeating King Harold II of England...
in 1066 and the latter being used by the commoners of Anglo-Saxon
Anglo-Saxons
Anglo-Saxon is a term used by historians to designate the Germanic tribes who invaded and settled the south and east of Great Britain beginning in the early 5th century AD, and the period from their creation of the English nation to the Norman conquest. The Anglo-Saxon Era denotes the period of...
stock. So while French-speaking heralds described banners as azure, commoners simply called them blue. Because it comes from a French word that simply means "blue", a wide range of colour values is used in the depiction of azure in armory and flags.

Azure is said to represent the following: