The Adige then runs eastbound through the Vinschgau to Merano where it is met by the Passer river from the north. The section between Merano and Bolzano is called Etschtal
Etschtal
The Etschtal is the name given to that part of alpine valley of the Adige in Trentino-South Tyrol, Italy, which stretches from Merano to Bolzano and from Salurn to Rovereto. It is also sometimes used to define the whole river valley, up to its entrance into the Padan Plain.South of Rovereto, the...
. South of Bolzano, the Eisack
Eisack
The Eisack is a river in Northern Italy, the second largest river in South Tyrol. Its source is near the Brenner Pass, at an altitude of about 1990 m above sea level. The river draws water from an area of about 4,200 km². After about 96 km, it joins the Adige river south of Bolzano. At first the...
joins the river that is now heading south through a valley that always has been one of the major routes through the Alps
Alps
The Alps is one of the great mountain range systems of Europe, stretching from Austria and Slovenia in the east through Italy, Switzerland, Liechtenstein and Germany to France in the west....
, leading to and from the Reschen Pass and the Brenner Pass
Brenner Pass
- Roadways :The motorway E45 leading from Innsbruck via Bolzano to Verona and Modena uses this pass, and is one of the most important north-south connections in Europe...
, at 1370 metres (4,494.8 ft) considered the easiest of the main Alpine passes. 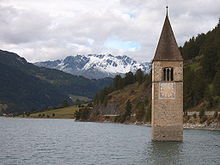 The Salurner Klause/Chiusa di Salorno narrows at Salorno
Salorno
Salorno is the southernmost comune of the Überetsch-Unterland district in South Tyrol, in the Italian region of Trentino-Alto Adige/Südtirol.-Geography:As of 31 December 2004, it had a population of 3,160 and an area of 33.2 km²....
mark the southern-most part of the predominantly German-speaking province of South Tyrol. Thus, the Adige was mentioned in the Lied der Deutschen
Das Lied der Deutschen
The "'" , has been used wholly or partially as the national anthem of Germany since 1922. The music was written by Joseph Haydn in 1797 as an anthem for the birthday of the Austrian Emperor Francis II of the Holy Roman Empire...
of 1841 as the southern border of the German language
German language
German is a West Germanic language, related to and classified alongside English and Dutch. With an estimated 90 – 98 million native speakers, German is one of the world's major languages and is the most widely-spoken first language in the European Union....
area of the time. This song was made the national anthem of Germany
Germany
Germany , officially the Federal Republic of Germany , is a federal parliamentary republic in Europe. The country consists of 16 states while the capital and largest city is Berlin. Germany covers an area of 357,021 km2 and has a largely temperate seasonal climate...
in 1922, after Italy took control of all of the Adige.

Near Trento
Trento
Trento is an Italian city located in the Adige River valley in Trentino-Alto Adige/Südtirol. It is the capital of Trentino...
, the Avisio, Noce, and Fersina rivers join. The Adige then crosses Trentino and later Veneto
Veneto
Veneto is one of the 20 regions of Italy. Its population is about 5 million, ranking 5th in Italy.Veneto had been for more than a millennium an independent state, the Republic of Venice, until it was eventually annexed by Italy in 1866 after brief Austrian and French rule...
, flowing past the city of Verona
Verona
Verona ; German Bern, Dietrichsbern or Welschbern) is a city in the Veneto, northern Italy, with approx. 265,000 inhabitants and one of the seven chef-lieus of the region. It is the second largest city municipality in the region and the third of North-Eastern Italy. The metropolitan area of Verona...
and the towns of Rovereto
Rovereto
Rovereto is a city and comune in Trentino in northern Italy, located in the Vallagarina valley of the Adige River.-History:Rovereto was an ancient fortress town standing at the frontier between the bishopric of Trento - an independent state until 1797 - and the republic of Venice, and later...
and Adria
Adria
Adria is a town and comune in the province of Rovigo in the Veneto region of Northern Italy, situated between the mouths of the rivers Adige and Po....
through the Lagarina valley
Vallagarina
The Lagarina Valley is a valley in northern Italy, used to define the lower mountain course of the Adige River. It is mostly included in the province of Trentino, with the lower section being part of the province of Verona. The largest town is Rovereto....
and the north-eastern part of the Po Plain into the Adriatic Sea. The Adige and the Po run parallel in the river delta
River delta
A delta is a landform that is formed at the mouth of a river where that river flows into an ocean, sea, estuary, lake, reservoir, flat arid area, or another river. Deltas are formed from the deposition of the sediment carried by the river as the flow leaves the mouth of the river...
without properly joining.

As a river in the mountains, it is subject to sudden swellings and overflows. It is also connected through artificial underground canals to Lake Garda
Lake Garda
Lake Garda is the largest lake in Italy. It is located in Northern Italy, about half-way between Brescia and Verona, and between Venice and Milan. Glaciers formed this alpine region at the end of the last ice age...
for flood prevention.