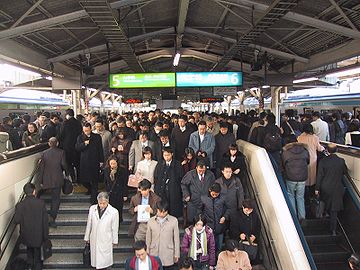 refers to someone whose income is salary
Salary
A salary is a form of periodic payment from an employer to an employee, which may be specified in an employment contract. It is contrasted with piece wages, where each job, hour or other unit is paid separately, rather than on a periodic basis....
based; particularly those working for corporations. Its frequent use by Japanese corporations, and its prevalence in Japanese manga
Manga
Manga is the Japanese word for "comics" and consists of comics and print cartoons . In the West, the term "manga" has been appropriated to refer specifically to comics created in Japan, or by Japanese authors, in the Japanese language and conforming to the style developed in Japan in the late 19th...
and anime
Anime
is the Japanese abbreviated pronunciation of "animation". The definition sometimes changes depending on the context. In English-speaking countries, the term most commonly refers to Japanese animated cartoons....
has gradually led to its acceptance in English-speaking countries as a noun for a Japanese white-collar
White-collar worker
The term white-collar worker refers to a person who performs professional, managerial, or administrative work, in contrast with a blue-collar worker, whose job requires manual labor...
businessman. The word can be found in many books and articles pertaining to Japanese culture. Immediately following World War II, becoming a salaryman was viewed as a gateway to a stable, middle-class lifestyle. In modern use, the term carries associations of long working hours, low prestige in the corporate hierarchy, absence of significant sources of income other than salary, wage slavery
Wage slavery
Wage slavery refers to a situation where a person's livelihood depends on wages, especially when the dependence is total and immediate. It is a negatively connoted term used to draw an analogy between slavery and wage labor, and to highlight similarities between owning and employing a person...
, and karōshi
Karoshi
, which can be translated literally from Japanese as "death from overwork", is occupational sudden death. Although this category has a significant count, Japan is one of the few countries that reports it in the statistics as a separate category...
. The term salaryman refers exclusively to men, and for women the term career woman
Career woman
is the term loosely used to describe the counterpart to the Japanese salaryman . In other words, a career woman is a Japanese woman who works for a salaried living. These Japanese women seek to either supplement their family's income through work or to remain independent by seeking a career as a...
is used.

According to researcher Ezra Vogel
Ezra Vogel
Ezra Feivel Vogel is an Henry Ford II Professor of the Social Sciences Emeritus at Harvard University and has written on Japan, China, and Asia.-Early life:...
, the word "salaryman" saw widespread use in Japan by 1930, "although the white-collar class remained relatively small until the rapid expansion of government bureaucracies and war-related industry before and during World War II."

The term does not include all workers who receive a set salary, but only "white-collar workers in the large bureaucracy of a business firm or government office". Workers in the mizu shōbai
Mizu shobai
Mizu shōbai , or the water trade, is the traditional euphemism for the night-time entertainment business in Japan, provided by hostess or snack bars, bars, and cabarets...
and entertainment industries (including actors and singers) are not included even though their income may be salary based. Similarly, doctors, engineers, lawyers, accountants, musicians, artists, politicians, the self-employed, and corporate executives are also excluded.

A typical description of the salaryman is a white-collar desk worker in a suit and tie, who may or may not have a high grade of education. However, the term may also be used to give a highly negative connotation (see Social image). The word "businessman" is often used to avoid the negative image. A significant percentage of Japan's workers are salarymen. In sociology, the salaryman is known as Japan's new middle class, as opposed to the old middle class consisting of farmers and storeowners.

The media often portray the salaryman in negative fashion for lack of initiative and originality. Because of this portrayal, communities may be less willing to help the salaryman with his emotional problems, which often leads to clinical depression
Clinical depression
Major depressive disorder is a mental disorder characterized by an all-encompassing low mood accompanied by low self-esteem, and by loss of interest or pleasure in normally enjoyable activities...
or even suicide
Suicide
Suicide is the act of intentionally causing one's own death. Suicide is often committed out of despair or attributed to some underlying mental disorder, such as depression, bipolar disorder, schizophrenia, alcoholism, or drug abuse...
. Corporations are often more willing to fire salarymen to lower costs, and many Japanese students are attempting to veer off the typical path of graduating from college to enter a corporation and become a salaryman. The act of escaping from the corporate lifestyle is known as datsusara. A vivid portrait of this can be found in the 2002 Takeshi Kitano film, Dolls
Dolls (film)
is a 2002 Japanese film written, edited and directed by Japanese director Takeshi Kitano. A highly stylized art film, Dolls is part of Kitano's non-crime film oeuvre, like 1991's A Scene at the Sea, and unlike most of his other films, he does not act in it...
.

The prevalence of salarymen in Japanese society has given birth to many depictions by the media and various cartoons. The following are stereotypical images of the salaryman:

The image of a lifestyle revolving entirely around work gave birth to the names, meaning corporate livestock, and corporate dog
Dog
The domestic dog is a domesticated form of the gray wolf, a member of the Canidae family of the order Carnivora. The term is used for both feral and pet varieties. The dog may have been the first animal to be domesticated, and has been the most widely kept working, hunting, and companion animal in...
, to ridicule salarymen.

The social image may differ according to the time period and economic situation. For example, the salaryman during the Japanese asset price bubble
Japanese asset price bubble
The was an economic bubble in Japan from 1986 to 1991, in which real estate and stock prices were greatly inflated. The bubble's collapse lasted for more than a decade with stock prices initially bottoming in 2003, although they would descend even further amidst the global crisis in 2008. The...
was a business warrior armed with an energy drink, whereas the salaryman in the post-bubble period was a worker cowering in fear of employee cuts or salary-reductions. The image of the salaryman in each period is often reflective of Japan's social condition as a whole.

The three stereotypical activities of the salaryman were listed above, but changing social circumstances have greatly diversified their lives outside of work.

Though the importance of social drinking has not declined, its image has changed over time from mass partying during the economic bubble to conservative consumption at home after the collapse of the economy during the 1990s.

Mahjong
Mahjong
Mahjong, sometimes spelled Mah Jongg, is a game that originated in China, commonly played by four players...
was immensely popular among the 1960s generation, who brought the game into company circles directly from high school and college groups. The 1970s generation saw a gradual decrease in the number of avid mahjong players, and by the 1980s, it became common to not show any interest at all. Some current salarymen may have never touched a mahjong board in their lives.

Golf became widely popular during the economic bubble, when golf club passes became useful tools for currying favor with corporate executives. Many mid-level salarymen were pressured into taking up golf to participate in golfing events with their bosses. The collapse of the economic bubble led to the closing of many of these golf courses, and the ritual of playing golf with executives has become increasingly rare. However, some current salarymen may have golfing experience from their student days, and golf is still acknowledged as an expensive hobby for salarymen.

An interesting recent phenomenon is the otaku
Otaku
is a Japanese term used to refer to people with obsessive interests, particularly anime, manga or video games.- Etymology :Otaku is derived from a Japanese term for another's house or family , which is also used as an honorific second-person pronoun...
salaryman, sometimes called . The 2000s has seen the rise of this type of salaryman, who appears perfectly ordinary at work, but is actually an intense otaku in his private life. It is currently not uncommon for salarymen to have a wide range of hobbies, but the “otaku as salaryman” is still treated as a relatively new entity in Japanese culture.

refers to the act of quitting work as a salaryman and finding a new occupation. The term only refers to those who quit their office job to find a more fulfilling line of work, and not those who were forced to search for a new job after being fired, or quit simply out of boredom. Becoming a stay-at-home dad also does not qualify for this category. Examples of this include becoming a SoHo
Small office/home office
Small office/home office, or SOHO, refers to the category of business or cottage industry which involves from 1 to 10 workers. SOHO can also stand for single office/home office....
worker, entrepreneur, web designer, farmer, fisherman, traditional artisan, writer, restaurant/store owner, franchiser, and many other occupations.

Datsusara is not an easy option for the salaryman. The new job is often a childhood dream or a momentary inspiration of some sort, and takes a huge amount of time and work to come to fruition. The main danger lies in taking up a profession without the proper knowledge and training; a salaryman seeking to become an organic farmer can unwittingly devastate his first crop because all of his knowledge is based on reading and studying rather than actual hands-on training.

Despite the numerous risks involved, the number of salarymen who quit their jobs has been on the rise since the 1990s. Many of these people only became salarymen because they were told to do so by their childhood environment, and quit after becoming discouraged by the nature of their work. Datsusara can also be seen as a rebound against the stress of schoolwork and university entrance exams, or against corporate hierarchy. Another factor is that improvements in living standards have made it so that one does not necessarily need a set income in order to survive.