Encyclopedia
STS-7 was a NASA
NASA
The National Aeronautics and Space Administration is the agency of the United States government that is responsible for the nation's civilian space program and for aeronautics and aerospace research...
Space Shuttle
Space Shuttle
The Space Shuttle was a manned orbital rocket and spacecraft system operated by NASA on 135 missions from 1981 to 2011. The system combined rocket launch, orbital spacecraft, and re-entry spaceplane with modular add-ons...
mission, during which Space Shuttle Challenger
Space Shuttle Challenger
Space Shuttle Challenger was NASA's second Space Shuttle orbiter to be put into service, Columbia having been the first. The shuttle was built by Rockwell International's Space Transportation Systems Division in Downey, California...
deployed several satellite
Satellite
In the context of spaceflight, a satellite is an object which has been placed into orbit by human endeavour. Such objects are sometimes called artificial satellites to distinguish them from natural satellites such as the Moon....
s into orbit. The shuttle launched from Kennedy Space Center
Kennedy Space Center
The John F. Kennedy Space Center is the NASA installation that has been the launch site for every United States human space flight since 1968. Although such flights are currently on hiatus, KSC continues to manage and operate unmanned rocket launch facilities for America's civilian space program...
on 18 June 1983, and landed at Edwards Air Force Base
Edwards Air Force Base
Edwards Air Force Base is a United States Air Force base located on the border of Kern County, Los Angeles County, and San Bernardino County, California, in the Antelope Valley. It is southwest of the central business district of North Edwards, California and due east of Rosamond.It is named in...
on 24 June. STS-7 was the seventh shuttle mission, and was Challengers second mission. It was also the first American
United States
The United States of America is a federal constitutional republic comprising fifty states and a federal district...
spaceflight involving a female astronaut
Astronaut
An astronaut or cosmonaut is a person trained by a human spaceflight program to command, pilot, or serve as a crew member of a spacecraft....
. 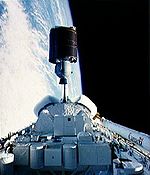 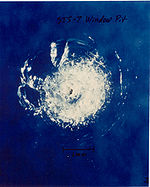 Challenger’s second flight began at 7:33 am EDT, 18 June 1983, with an on-time liftoff. It was the first spaceflight of an American woman (Sally K. Ride
Sally Ride
Sally Kristen Ride is an American physicist and a former NASA astronaut. Ride joined NASA in 1978, and in 1983 became the first American woman—and then-youngest American, at 32—to enter space...
), the largest crew to fly in a single spacecraft up to that time (five people), and the first flight that included members of NASA's Group 8 astronaut class selected in 1978 to fly the Space Shuttle.

The crew of STS-7 included Robert L. Crippen, commander, making his second Shuttle flight; Frederick H. Hauck, pilot; Ride, John M. Fabian
John M. Fabian
John McCreary Fabian is a former NASA Astronaut and Air Force officer who flew two space shuttle missions and on the development of the shuttle's robotic arm. He later led the Air Force's space operations....
and Norman Thagard
Norman Thagard
Norman Earl Thagard is an American scientist and former NASA astronaut. He is the first American to ride to space on board a Russian vehicle, and can be considered the first American cosmonaut...
, all mission specialists. Thagard conducted medical tests of the Space Adaptation Syndrome
Space adaptation syndrome
Space adaptation syndrome or space sickness is a condition experienced by around half of space travelers during adaptation to weightlessness. It is related to motion sickness, as the vestibular system adapts to weightlessness.- Cause and remedy :...
, a bout of nausea
Nausea
Nausea , is a sensation of unease and discomfort in the upper stomach with an involuntary urge to vomit. It often, but not always, precedes vomiting...
frequently experienced by astronauts during the early phase of a space flight.

Two communications satellite
Communications satellite
A communications satellite is an artificial satellite stationed in space for the purpose of telecommunications...
s – Anik C-2 for Telesat of Canada
Canada
Canada is a North American country consisting of ten provinces and three territories. Located in the northern part of the continent, it extends from the Atlantic Ocean in the east to the Pacific Ocean in the west, and northward into the Arctic Ocean...
, and Palapa B-l for Indonesia
Indonesia
Indonesia , officially the Republic of Indonesia , is a country in Southeast Asia and Oceania. Indonesia is an archipelago comprising approximately 13,000 islands. It has 33 provinces with over 238 million people, and is the world's fourth most populous country. Indonesia is a republic, with an...
– were successfully deployed during the first two days of the mission. The mission also carried the first Shuttle Pallet Satellite (SPAS-l) built by Messerschmitt-Bolkow-Blohm, a West German
West Germany
West Germany is the common English, but not official, name for the Federal Republic of Germany or FRG in the period between its creation in May 1949 to German reunification on 3 October 1990....
aerospace firm. SPAS-l was unique in that it was designed to operate in the payload bay or be deployed by the RMS as a free-flying satellite. It carried 10 experiments to study formation of metal alloys in microgravity, the operation of heat pipes, instruments for remote sensing observations, and a mass spectrometer to identify various gases in the payload bay. It was deployed by the RMS and flew alongside and over Challenger for several hours, performing various maneuvers, while a U.S.-supplied camera took pictures from the SPAS-1 of the orbiter. The RMS later grappled the pallet and returned it to the payload bay.

STS-7 also carried seven GAS
Getaway Special
Getaway Special was a NASA program that offered interested individuals, or groups, opportunities to fly small experiments aboard the Space Shuttle...
canisters, which contained a wide variety of experiments, as well as the OSTA-2 payload, a joint U.S.-West German scientific pallet payload. Finally, the orbiter's Ku-band
Ku band
The Kμ band is a portion of the electromagnetic spectrum in the microwave range of frequencies. This symbol refers to —in other words, the band directly below the K-band...
antenna was able to relay data through the Tracking and Data Relay Satellite to a ground terminal for the first time.

STS-7 was scheduled to make the first Shuttle landing at Kennedy Space Center
Kennedy Space Center
The John F. Kennedy Space Center is the NASA installation that has been the launch site for every United States human space flight since 1968. Although such flights are currently on hiatus, KSC continues to manage and operate unmanned rocket launch facilities for America's civilian space program...
's then-new Shuttle Landing Facility. However, unacceptable weather forced a change to Runway 23 at Edwards AFB. The landing took place on 24 June 1983, at 6:57 am PDT. The mission lasted 6 days, 2 hours, 23 minutes, and 59 seconds, and covered about 2.2 million miles during 97 orbits of the Earth. Challenger was returned to KSC on 29 June.

While Challenger was on-orbit, one of its windows was damaged by space debris
Space debris
Space debris, also known as orbital debris, space junk, and space waste, is the collection of objects in orbit around Earth that were created by humans but no longer serve any useful purpose. These objects consist of everything from spent rocket stages and defunct satellites to erosion, explosion...
.

The seven white stars in the black field of the mission patch, as well as the arm extending from the shuttle in the shape of a 7, indicate the flight's numerical designation in the Space Transportation System's mission sequence. The five-armed symbol on the right side illustrates the four male/one female crew.

NASA began a tradition of playing music to astronauts during the Gemini program, and first used music to wake up a flight crew during Apollo 15
Apollo 15
Apollo 15 was the ninth manned mission in the American Apollo space program, the fourth to land on the Moon and the eighth successful manned mission. It was the first of what were termed "J missions", long duration stays on the Moon with a greater focus on science than had been possible on previous...
. Each track is specially chosen, often by the astronauts' families, and usually has a special meaning to an individual member of the crew, or is applicable to their daily activities.