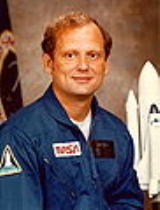 Overview
Norman Earl Thagard is an American
United States
The United States of America is a federal constitutional republic comprising fifty states and a federal district...
scientist and former NASA
NASA
The National Aeronautics and Space Administration is the agency of the United States government that is responsible for the nation's civilian space program and for aeronautics and aerospace research...
astronaut
Astronaut
An astronaut or cosmonaut is a person trained by a human spaceflight program to command, pilot, or serve as a crew member of a spacecraft....
. He is the first American to ride to space on board a Russian vehicle, and can be considered the first American cosmonaut. He did this on March 14, 1995 in the Soyuz TM-21
Soyuz TM-21
Soyuz TM-21 was Soyuz mission, a human spaceflight mission transporting personnel to the Russian space station Mir. Part of the US/Russian Shuttle-Mir Program, the mission launched from Baikonur Cosmodrome, atop a Soyuz-U2 carrier rocket, at 06:11:34 UTC on March 14, 1995...
spacecraft for the Russian Mir-18 mission.
Thagard was born in Marianna, Florida
Marianna, Florida
Marianna is a city in Jackson County, Florida, United States. The population was 6,230 at the 2000 census. As of 2004, the population estimated by the U.S. Census Bureau is 6,200 . It is the county seat of Jackson County and is home to Chipola College...
, but considers Jacksonville, Florida
Jacksonville, Florida
Jacksonville is the largest city in the U.S. state of Florida in terms of both population and land area, and the largest city by area in the contiguous United States. It is the county seat of Duval County, with which the city government consolidated in 1968...
, to be his hometown.

What contributions to Florida did Norman Thagard made?
More
x