During the rule of the Ancient Romans
Ancient Rome
Ancient Rome was a thriving civilization that grew on the Italian Peninsula as early as the 8th century BC. Located along the Mediterranean Sea and centered on the city of Rome, it expanded to one of the largest empires in the ancient world....
, near Burgas, Debeltum (or Dibaltum) was established as a military colony for veterans by Vespasian
Vespasian
Vespasian , was Roman Emperor from 69 AD to 79 AD. Vespasian was the founder of the Flavian dynasty, which ruled the Empire for a quarter century. Vespasian was descended from a family of equestrians, who rose into the senatorial rank under the Emperors of the Julio-Claudian dynasty...
. In the Middle Ages
Middle Ages
The Middle Ages is a periodization of European history from the 5th century to the 15th century. The Middle Ages follows the fall of the Western Roman Empire in 476 and precedes the Early Modern Era. It is the middle period of a three-period division of Western history: Classic, Medieval and Modern...
, a small fortress called Pyrgos was erected where Burgas is today and was most probably used as a watchtower. It was only in the 17th century that a settlement named Ahelo-Pirgas grew in the modern area of the city. It was later renamed to Bourgas and had only about 3,000 inhabitants. The city was a township in İslimye
Sliven
Sliven is the eighth-largest city in Bulgaria and the administrative and industrial centre of Sliven Province and municipality. It is a relatively large town with 89,848 inhabitants, as of February 2011....
(Sliven) sanjak in at first Rumelia Eyalet
Rumelia Eyalet
The eyalet of Rumeli or eyalet of Rumelia , also known as Rumeli Beylerbeyliği was a eyalet of the Ottoman Empire. The capital was in Adrianople , Monastir and Sofia. Its reported area in the 19th century was .It was formed during the reign of Murad I as the first Beylerbeylik of the Ottoman Empire...
, after that in the Silistra Eyalet and Edirne Eyalet
Edirne Eyalet
The Eyalet of Adrianople or Edirne was constituted from parts of the eyalets of Silistra and Rumelia in 1826. The region later became part of the Adrianople Vilayet.-Administrative divisions:Sanjaks of the Eyalet in the mid-19th century:...
before the liberation in 1878. It was a department centre in Eastern Rumelia
Eastern Rumelia
Eastern Rumelia or Eastern Roumelia was an administratively autonomous province in the Ottoman Empire and Principality of Bulgaria from 1878 to 1908. It was under full Bulgarian control from 1885 on, when it willingly united with the tributary Principality of Bulgaria after a bloodless revolution...
before incorporated in the Principality of Bulgaria
Principality of Bulgaria
The Principality of Bulgaria was a self-governing entity created as a vassal of the Ottoman Empire by the Treaty of Berlin in 1878. The preliminary treaty of San Stefano between the Russian Empire and the Porte , on March 3, had originally proposed a significantly larger Bulgarian territory: its...
in 1885. 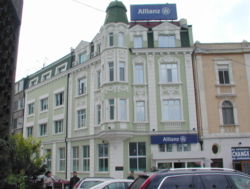 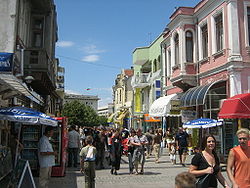 In the early 19th century Burgas was depopulated after raids by kurzdhali bandits. By the mid-19th century it had recovered its economic prominence through the growth of craftsmanship and the export of grain.

In the 19th century, with the increasing maritime trade in the Black Sea, Burgas became one of the most important port cities. However, it has lost some of its importance with the shift of the trade between Balkans-Istanbul-Trabzon to Southern port cities with the construction of Salonica-Istanbul railways. In 1903, the Burgas Central railway station
Burgas Central railway station
Burgas Central railway station is the main station serving the Black Sea city and municipality of Burgas, the fourth most populous city, and the largest and most important port, in Bulgaria....
opened, giving an additional boost to the city's expansion. Burgas, unlike many other Bulgarian cities, was not much affected by Communist-type urbanization and has kept much of its 19th- and early-20th-century architecture.

Today the local port is the largest in Bulgaria adding significantly to the regional economy. Burgas also holds annual national exhibitions and international festivals and has a vibrant student population of over 6,000 that add to the city's appeal. The historical society also maintains an open-air museum at Beglik Tash
Beglik tash
Beglik Tash is a Thracian rock sanctuary situated on the southern Black Sea coast of Bulgaria, a few kilometers north of the city of Primorsko....
.

Several countries have consulates in Burgas, among them Turkey
Turkey
Turkey , known officially as the Republic of Turkey , is a Eurasian country located in Western Asia and in East Thrace in Southeastern Europe...
, Belarus
Belarus
Belarus , officially the Republic of Belarus, is a landlocked country in Eastern Europe, bordered clockwise by Russia to the northeast, Ukraine to the south, Poland to the west, and Lithuania and Latvia to the northwest. Its capital is Minsk; other major cities include Brest, Grodno , Gomel ,...
, Romania
Romania
Romania is a country located at the crossroads of Central and Southeastern Europe, on the Lower Danube, within and outside the Carpathian arch, bordering on the Black Sea...
, Russia
Russia
Russia or , officially known as both Russia and the Russian Federation , is a country in northern Eurasia. It is a federal semi-presidential republic, comprising 83 federal subjects...
and Ukraine
Ukraine
Ukraine is a country in Eastern Europe. It has an area of 603,628 km², making it the second largest contiguous country on the European continent, after Russia...
.

Rotterdam
Rotterdam
Rotterdam is the second-largest city in the Netherlands and one of the largest ports in the world. Starting as a dam on the Rotte river, Rotterdam has grown into a major international commercial centre...
, Netherlands Yantai
Yantai
Yantai is a prefecture-level city in northeastern Shandong province, People's Republic of China. Located on the southern coast of the Bohai Sea and the eastern coast of the Laizhou Bay, Yantai borders the cities of Qingdao and Weihai to the southwest and east respectively.The largest fishing...
, People's Republic of China Krasnodar
Krasnodar
Krasnodar is a city in Southern Russia, located on the Kuban River about northeast of the Black Sea port of Novorossiysk. It is the administrative center of Krasnodar Krai . Population: -Name:...
, Russia Alexandroupoli
Alexandroupoli
Alexandroupoli , is a city of Greece and the capital of the Evros peripheral unit in Thrace. Named after King Alexander, it is an important port and commercial center of northeastern Greece.-Name:...
, Greece Miskolc
Miskolc
Miskolc is a city in northeastern Hungary, mainly with heavy industrial background. With a population close to 170,000 Miskolc is the fourth largest city of Hungary It is also the county capital of Borsod-Abaúj-Zemplén and the regional centre of Northern Hungary.- Geography :Miskolc is located...
, Hungary Beşiktaş
Besiktas
Beşiktaş is a municipality of Istanbul, Turkey, located on the European shore of the Bosphorus. It is bordered on the north by Sarıyer and Şişli, on the west by Kağıthane and Şişli, on the south by Beyoğlu, and on the east by the Bosphorus...
, Turkey Mali Mokri Lug
Mali Mokri Lug
Mali Mokri Lug is an urban neighborhood of Belgrade, the capital of Serbia. It is located in the south-eastern section of Belgrade's municipality of Zvezdara. It marks the border with the municipality of Grocka. It mostly stretches between Bulevar kralja Aleksandra and the Highway Belgrade–Niš,...
, Serbia