Encyclopedia
Rurales was the name commonly used to designate the Mexican
Mexico
The United Mexican States , commonly known as Mexico , is a federal constitutional republic in North America. It is bordered on the north by the United States; on the south and west by the Pacific Ocean; on the southeast by Guatemala, Belize, and the Caribbean Sea; and on the east by the Gulf of...
Guardia Rural (Rural Guard): a force of mounted police
Mounted police
Mounted police are police who patrol on horseback or camelback. They continue to serve in remote areas and in metropolitan areas where their day-to-day function may be picturesque or ceremonial, but they are also employed in crowd control because of their mobile mass and height advantage and...
or gendarmerie
Gendarmerie
A gendarmerie or gendarmery is a military force charged with police duties among civilian populations. Members of such a force are typically called "gendarmes". The Shorter Oxford English Dictionary describes a gendarme as "a soldier who is employed on police duties" and a "gendarmery, -erie" as...
that existed between 1861 and 1914. In modern Mexico the name is applied to members of the part-time Rural Defense Corps. 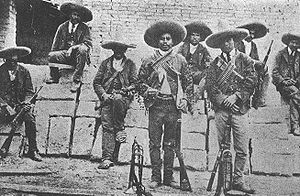 This force was established as a federal constabulary
Constabulary
Constabulary may have several definitions.*A civil, non-paramilitary force consisting of police officers called constables. This is the usual definition in Britain, in which all county police forces once bore the title...
by the Liberal regime of Benito Juárez
Benito Juárez
Benito Juárez born Benito Pablo Juárez García, was a Mexican lawyer and politician of Zapotec origin from Oaxaca who served five terms as president of Mexico: 1858–1861 as interim, 1861–1865, 1865–1867, 1867–1871 and 1871–1872...
in 1861. The Guardia Rural became best known during the long rule of President
President of Mexico
The President of the United Mexican States is the head of state and government of Mexico. Under the Constitution, the president is also the Supreme Commander of the Mexican armed forces...
Porfirio Díaz
Porfirio Díaz
José de la Cruz Porfirio Díaz Mori was a Mexican-American War volunteer and French intervention hero, an accomplished general and the President of Mexico continuously from 1876 to 1911, with the exception of a brief term in 1876 when he left Juan N...
(1877–1911).

As originally constituted the Rurales were too weak in numbers and organisation to effectively control the widespread banditry
Outlaw
In historical legal systems, an outlaw is declared as outside the protection of the law. In pre-modern societies, this takes the burden of active prosecution of a criminal from the authorities. Instead, the criminal is withdrawn all legal protection, so that anyone is legally empowered to persecute...
in Mexico during the 1860s and 70s. The concept of an armed and mobile rural police, organised on military lines, was derived from the Spanish
Spain
Spain , officially the Kingdom of Spain languages]] under the European Charter for Regional or Minority Languages. In each of these, Spain's official name is as follows:;;;;;;), is a country and member state of the European Union located in southwestern Europe on the Iberian Peninsula...
Civil Guard ("Guardia Civil"), which had been established in 1844 and quickly won a reputation as an effective but often oppressive force.

The existing Corps of Rurales was incorporated into the Republican Army and irregular forces opposing the French intervention of 1862–67. However the Imperial regime of Archduke Maximilian created a parallel force known as the Resguardo, which by October 1865 numbered 12,263; indicating that the concept of a rural mounted police force was now well established. Following the Republican victory, Los Cuerpos Rurales were re-established.

President Porfirio Díaz had expanded the Rurales from a few hundred to nearly 2,000 by 1889 as part of his programme of modernization and eventually repression. Initially some captured bandits were forcibly recruited into the Rurales, although the basis of enlistment later became more conventional. Officers were usually seconded from the Federal Army. The Rurales were heavily armed, carrying sabres
Sword
A sword is a bladed weapon used primarily for cutting or thrusting. The precise definition of the term varies with the historical epoch or the geographical region under consideration...
, carbines and pistols. They were divided into ten corps, each comprising three companies of about 76 men.

The image of the Rurales as a ruthless and efficient organisation, which seldom took prisoners under the notorious ley fuga and inevitably got its man, was deliberately fostered under the Porfirian regime. However, research by Professor Paul J. Vanderwood during the 1970s involving detailed examination of the records of the corps indicated that the Rurales were neither as effective nor as brutal as regime publicists had suggested. The daily pay of 1.30 pesos was not high and up to 25% of recruits deserted before completing their four year enlistments. Never numbering more than about 4,000 men located in small detachments, the Rurales were too thinly spread to ever completely eliminate unrest in the Mexican countryside. They did however impose a superficial order, especially in the central regions around Mexico City
Mexico City
Mexico City is the Federal District , capital of Mexico and seat of the federal powers of the Mexican Union. It is a federal entity within Mexico which is not part of any one of the 31 Mexican states but belongs to the federation as a whole...
, which encouraged the foreign investment sought by Díaz and his científico
Científico
The Científicos were a circle of technocratic advisors to President of Mexico Porfirio Díaz....
advisers. To a certain extent the regime saw the Rurales as a counterweight to the much larger Federal army and in the later years of the regime they were increasingly used to control industrial unrest, in addition to their traditional task of patrolling country areas.

The Rurales achieved a high profile internationally, rather like that of the Royal Canadian Mounted Police
Royal Canadian Mounted Police
The Royal Canadian Mounted Police , literally ‘Royal Gendarmerie of Canada’; colloquially known as The Mounties, and internally as ‘The Force’) is the national police force of Canada, and one of the most recognized of its kind in the world. It is unique in the world as a national, federal,...
or the Texas Rangers
Texas Ranger Division
The Texas Ranger Division, commonly called the Texas Rangers, is a law enforcement agency with statewide jurisdiction in Texas, and is based in Austin, Texas...
, whose roles they paralleled. They wore a distinctive grey uniform braided in silver
Silver
Silver is a metallic chemical element with the chemical symbol Ag and atomic number 47. A soft, white, lustrous transition metal, it has the highest electrical conductivity of any element and the highest thermal conductivity of any metal...
, which was modelled on the national charro
Charro
Charro is a term referring to a traditional horseman from Mexico, originating in the central-western regions primarily in the state of Jalisco including: Zacatecas, Durango, Guanajuato, Morelos, Puebla...
dress and included a wide sombrero
Sombrero
Sombrero in English refers to a type of wide-brimmed hat originating in Mexico. In Spanish, however, it is the generic word for "hat", which originates from "sombra", meaning "shade"....
and red or black necktie. This dress, their frequent involvement in ceremonial parades and their general reputation invariably drew the attention of foreign visitors to Mexico during the Porfiriato. They were variously described as "the world's most picturesque policemen" and "mostly bandits". The former may have true but the latter was a distorted memory of the rough and ready early days of the corps. Some of the Mexican states maintained their own rural mounted police forces and there was an efficient city police in Mexico City, but none matched the Federal Rurales in notoriety or glamour.
After the overthrow of Díaz, the Rurales continued to exist under Presidents Francisco I. Madero
Francisco I. Madero
Francisco Ignacio Madero González was a politician, writer and revolutionary who served as President of Mexico from 1911 to 1913. As a respectable upper-class politician, he supplied a center around which opposition to the dictatorship of Porfirio Díaz could coalesce...
and Victoriano Huerta
Victoriano Huerta
José Victoriano Huerta Márquez was a Mexican military officer and president of Mexico. Huerta's supporters were known as Huertistas during the Mexican Revolution...
. Madero's intention seems to have been that the force should remain essentially unchanged, though with the abuses of the Diaz years curbed. In practice the induction of large numbers of Maderista fighters on a temporary basis while awaiting discharge simply diluted such efficiency as the corps had retained. Huerta saw a more central role for the Rurales using a detachment to murder Madero after the "Ten Tragic Days
La decena trágica
The Ten Tragic Days was a series of events that took place in Mexico City between February 9 and February 19, 1913, during the Mexican Revolution. They culminated in a coup d'état and the assassination of President Francisco I...
" of 1913. He then proposed to expand the existing units into a field force of over ten thousand men serving alongside the regular Federal troops. Recruiting and desertion problems prevented this ever being a realistic project and the remains of the Guardia Rural, along with the old Federal army, were finally disbanded in July 1914 when Huerta fled into exile.

Today's Rurales are a part-time militia called the Cuerpo de Defensa Rural (Rural Defense Corps), originally formed as village self defence groups during the agrarian disturbances of the 1920s. They do not have any functions that parallel those of the paramilitary mounted police force of the 1861–1914 era. This corps was formally organized under army jurisdiction according to the Organic Law of 1926. Its origins, however, date back to the period when the revolutionary agrarian reform program was first implemented in 1915. In efforts to protect themselves against the private armies of recalcitrant large landowners, rural peasants organized themselves into small defense units and were provided weapons by the revolutionary government. Until 1955 enlistment in the Rural Defense Force was restricted to peasants working on collective farms (ejidos). After 1955 participation in the Rural Defense Force was expanded to include small farmers and laborers. All defense units, however, were attached to ejidos, possibly as a means to guarantee control.

The Rural Defense Force numbered some 120,000 in 1970, but was being phased out in the 1990s. The IISS's The Military Balance listed the corps as having only 14,000 members in 1996. The volunteers, aged eighteen to fifty, enlist for a three-year period. Members do not wear uniforms or receive pay for their service but are eligible for limited benefits. They are armed with outmoded rifles, which may be the chief inducement to enlist. Rudimentary training is provided by troops assigned to military zone detachments.

The basic unit is the platoon
Platoon
A platoon is a military unit typically composed of two to four sections or squads and containing 16 to 50 soldiers. Platoons are organized into a company, which typically consists of three, four or five platoons. A platoon is typically the smallest military unit led by a commissioned officer—the...
( pelotón ) of eleven members under immediate control of the ejido . Use of the unit outside the ejidos is by order of the military zone commander. One asset of the corps is the capacity of its members to gather intelligence about activities within the ejidos and in remote rural areas seldom patrolled by military zone detachments. Corps members also act as guides for military patrols, participate in civic-action projects, and assist in destroying marijuana crops and preventing the transport of narcotics through their areas.


The Rurales in fiction

"Rurales? They're a sort of country police; but don't draw any mental crayon portraits of the worthy constable with a tin star and a gray goatee. The rurales---well, if we'd mount our Supreme Court on broncos, arm 'em with Winchesters
Winchester rifle
In common usage, Winchester rifle usually means any of the lever-action rifles manufactured by the Winchester Repeating Arms Company, though the company has also manufactured many rifles of other action types...
, and start 'em out after John Doe et al. we'd have about the same thing."