Encyclopedia
Royal Copenhagen, officially the Royal Porcelain Factory is a manufacturer of porcelain
Porcelain
Porcelain is a ceramic material made by heating raw materials, generally including clay in the form of kaolin, in a kiln to temperatures between and...
products and was founded in Copenhagen
Copenhagen
Copenhagen is the capital and largest city of Denmark, with an urban population of 1,199,224 and a metropolitan population of 1,930,260 . With the completion of the transnational Øresund Bridge in 2000, Copenhagen has become the centre of the increasingly integrating Øresund Region...
1 May 1775
1775 in Denmark
-Incumbents:* Monarch – HM Christian VII* Prime minister – Ove Høegh-Guldberg-Events:* May 1 – The Royal Copenhagen manufactory is founded by the chemist Frantz Heinrich Müller, who is given a 50-year monopoly to create porcelainand in Denmark, and begins operations in a converted...
under the protection of Queen Juliane Marie
Juliana Maria of Brunswick-Wolfenbüttel
Duchess Juliane Marie of Brunswick-Wolfenbüttel , , was queen of Denmark between 1752 and 1766, second consort of king Frederick V of Denmark and Norway, mother of the prince-regent Hereditary Prince Frederick of Denmark and Norway and herself de facto regent 1772–1784.- Early life and queen :Born...
. It is recognized by its factory mark, the three wavy lines above each other, symbolizing Denmark’s three straits: Oresund
Oresund
The Sound , is the strait that separates the Danish island Zealand from the southern Swedish province of Scania. Its width is just at the narrowest point between Helsingør, Denmark, and Helsingborg, Sweden...
, the Great Belt
Great Belt
The Great Belt is a strait between the main Danish islands of Zealand and Funen . Effectively dividing Denmark in two, the Belt was served by the Great Belt ferries from the late 19th century until the islands were connected by the Great Belt Fixed Link in 1997–98.-Geography:The Great Belt is the...
and the Little Belt
Little Belt
The Little Belt is a strait between the Danish island of Funen and the Jutland Peninsula.The belt is about 50 km long and 800m to 28 km wide, the maximum depth is approximately 75 m, and contains numerous small Danish islands....
.

Starting in the 17th century, Europeans were fascinated by the blue and white and white porcelain exported from China
China
Chinese civilization may refer to:* China for more general discussion of the country.* Chinese culture* Greater China, the transnational community of ethnic Chinese.* History of China* Sinosphere, the area historically affected by Chinese culture...
during the Ming
Ming Dynasty
The Ming Dynasty, also Empire of the Great Ming, was the ruling dynasty of China from 1368 to 1644, following the collapse of the Mongol-led Yuan Dynasty. The Ming, "one of the greatest eras of orderly government and social stability in human history", was the last dynasty in China ruled by ethnic...
and Qing
Qing Dynasty
The Qing Dynasty was the last dynasty of China, ruling from 1644 to 1912 with a brief, abortive restoration in 1917. It was preceded by the Ming Dynasty and followed by the Republic of China....
dynasties, but Danes had to discover for themselves how to produce the "white gold" (white glaze) that they found so irresistible about porcelain.

The Royal Copenhagen manufactory operations began in a converted post office in 1775. It was founded by a chemist, Frantz Heinrich Müller, who was given a 50-year monopoly to create porcelain. The first pieces manufactured were dining services for the royal family. When, in 1779, King Christian VII
Christian VII of Denmark
Christian VII was King of Denmark and Norway and Duke of Schleswig and Holstein from 1766 until his death. He was the son of Danish King Frederick V and his first consort Louisa, daughter of King George II of Great Britain....
assumed financial responsibility, the manufactory was styled the Royal Porcelain Factory. In 1790, Royal Copenhagen brought out its now famous Flora Danica
Flora Danica
A product of The Age of Enlightenment, Flora Danica is a comprehensive atlas of botany, containing folio-sized pictures of all the wild plants native to Denmark, in the period from 1761-1883....
‘Blue Fluted’ dinner service, with gilded edge and Danish flora motifs, and Royal Copenhagen held a monopoly on the "Blue Fluted" name.

By 1851, Royal Copenhagen qualified for the World Expo
The Great Exhibition
The Great Exhibition of the Works of Industry of all Nations or The Great Exhibition, sometimes referred to as the Crystal Palace Exhibition in reference to the temporary structure in which it was held, was an international exhibition that took place in Hyde Park, London, from 1 May to 15 October...
in London
London
London is the capital city of :England and the :United Kingdom, the largest metropolitan area in the United Kingdom, and the largest urban zone in the European Union by most measures. Located on the River Thames, London has been a major settlement for two millennia, its history going back to its...
. In 1868, as a result of royal companies' privatization, the Royal Porcelain Factory came into private hands. It was purchased by the faience
Faience
Faience or faïence is the conventional name in English for fine tin-glazed pottery on a delicate pale buff earthenware body, originally associated with Faenza in northern Italy. The invention of a white pottery glaze suitable for painted decoration, by the addition of an oxide of tin to the slip...
factory Aluminia
Aluminia
Aluminia was a Danish factory of faience or earthenware pottery, established in Copenhagen in 1863. In 1882, the owners of Aluminia purchasedthe Royal Copenhagen porcelain factory...
in 1882. Shortly after Aluminia's acquisition, Royal Copenhagen production was moved to a modern factory building at Aluminia’s site in Frederiksberg
Frederiksberg
Frederiksberg Kommune is a municipality on the island of Zealand in Denmark. It surrounded by the city of Copenhagen. The municipality, co-extensive with its seat, covers an area of and has a total population of 98,782 making it the smallest municipality in Denmark area-wise, the fifth most...
, on the outskirts of Copenhagen. By 1889, Royal Copenhagen qualified for the World Expo
Exposition Universelle (1889)
The Exposition Universelle of 1889 was a World's Fair held in Paris, France from 6 May to 31 October 1889.It was held during the year of the 100th anniversary of the storming of the Bastille, an event traditionally considered as the symbol for the beginning of the French Revolution...
in Paris
Paris
Paris is the capital and largest city in France, situated on the river Seine, in northern France, at the heart of the Île-de-France region...
, winning the Grand Prix, giving it international exposure.

In recent years, Royal Copenhagen acquired Georg Jensen
Georg Jensen
Georg Arthur Jensen was a Danish silversmith.Born in 1866, Jensen was the son of a knife grinder in the town of Raadvad just to the north of Copenhagen. Jensen began his training in goldsmithing at the age of 14 in Copenhagen...
in 1972, incorporated with Holmegaard Glass Factory
Holmegaard Glass Factory
Holmegaard Glass Factory, or "Holmegaards Glasværk" as it is called in Danish, is a world famous glass company located in the village of Holmegaard just outside of Næstved. During the last couple of years a lot of new initiatives have been launched at Holmegaard Glasværk, and it is now a place for...
in 1985, and finally Bing & Grøndahl
Bing & Grøndahl
Bing & Grøndahl was a Danish porcelain manufacturer founded in 1853 by the sculptor Frederik Vilhelm Grøndahl and merchant brothers Meyer Hermann Bing and Jacob Herman Bing. The trademark backstamp for Bing & Grøndahl porcelains is the three towers derived from the Coat of Arms of Copenhagen...
in 1987. Today, Royal Copenhagen is a part of a group of Scandinavia
Scandinavia
Scandinavia is a cultural, historical and ethno-linguistic region in northern Europe that includes the three kingdoms of Denmark, Norway and Sweden, characterized by their common ethno-cultural heritage and language. Modern Norway and Sweden proper are situated on the Scandinavian Peninsula,...
n companies, Royal Scandinavia, together with Georg Jensen, and is owned by the Danish private equity fund, Axcel. Following Axcel's acquisition of Royal Scandinavia, Holmegaard
Holmegaard
Until January 1, 2007, Holmegaard was a municipality in Storstrøm County in the southern part of the island of Zealand in south Denmark. The municipality covered an area of 66 km², and had a total population of 7,442 . Its last mayor was Søren Dysted, a member of the Social Democrats ...
Glasværk was sold in a MBO
Mbo
MBO may be:* Mbo language , a language spoken in Cameroon* Mbo language , spoken by the Mbo people of Ituri Province, Mambasa Territory in the Democratic Republic of the Congo...
and a controlling interest in the Swedish glass works Orrefors
Orrefors
Orrefors is a locality situated in Nybro Municipality, Kalmar County, Sweden with 696 inhabitants in 2005. The internationally acclaimed Orrefors glassworks are situated here....
Kosta Boda was sold to New Wave Group. In April 2008 it was reported that Royal Copenhagen was moving nearly all of its production to Thailand. 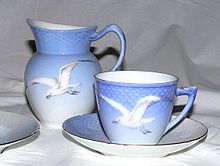