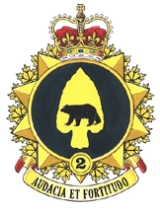 Encyclopedia
2 Canadian Mechanized Brigade Group (2 CMBG) is a Canadian Forces
Canadian Forces
The Canadian Forces , officially the Canadian Armed Forces , are the unified armed forces of Canada, as constituted by the National Defence Act, which states: "The Canadian Forces are the armed forces of Her Majesty raised by Canada and consist of one Service called the Canadian Armed Forces."...
brigade group
Brigade group
A brigade group is a term used primarily in armies of the Commonwealth of Nations for an ad hoc arrangement of forces and not a permanent organisation whereas, with a capital G, a Brigade Group is....
that is part of Land Forces Central Area of the Canadian army. It is currently based in CFB Petawawa
CFB Petawawa
Canadian Forces Base Petawawa, commonly referred to as CFB Petawawa, or simply "Pet", is a Canadian Forces Base located in Petawawa, Ontario. It is operated as an army base by Canadian Forces Land Force Command.-Base facts:...
. One of its three infantry
Infantry
Infantrymen are soldiers who are specifically trained for the role of fighting on foot to engage the enemy face to face and have historically borne the brunt of the casualties of combat in wars. As the oldest branch of combat arms, they are the backbone of armies...
battalion
Battalion
A battalion is a military unit of around 300–1,200 soldiers usually consisting of between two and seven companies and typically commanded by either a Lieutenant Colonel or a Colonel...
s is under the administration of Land Force Atlantic Area
Land Force Atlantic Area
Land Force Atlantic Area is responsible for Canadian Army operations in the Canadian provinces of New Brunswick, Newfoundland and Labrador, Nova Scotia, and Prince Edward Island. LFAA is headquartered at Canadian Forces Base Halifax on the Atlantic coast...
and is stationed at CFB Gagetown
CFB Gagetown
Canadian Forces Base Gagetown, referred to as CFB Gagetown is a large Canadian Forces Base located in southwestern New Brunswick.- Construction of the base :...
in New Brunswick
New Brunswick
New Brunswick is one of Canada's three Maritime provinces and is the only province in the federation that is constitutionally bilingual . The provincial capital is Fredericton and Saint John is the most populous city. Greater Moncton is the largest Census Metropolitan Area...
.