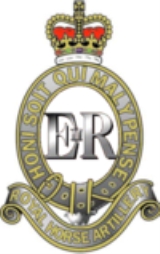 How can i aquire information of my fathers war time service. thanks Den
More

Encyclopedia
The regiments of the Royal Horse Artillery (RHA), dating from 1793, are part of the Royal Regiment of Artillery (commonly termed Royal Artillery
Royal Artillery
The Royal Regiment of Artillery, commonly referred to as the Royal Artillery , is the artillery arm of the British Army. Despite its name, it comprises a number of regiments.-History:...
) of the British Army
British Army
The British Army is the land warfare branch of Her Majesty's Armed Forces in the United Kingdom. It came into being with the unification of the Kingdom of England and Scotland into the Kingdom of Great Britain in 1707. The new British Army incorporated Regiments that had already existed in England...
. Horses are still in service for ceremonial purposes but were phased out from operational deployment during the 1930s.

In 1793, in the course of the French Revolutionary Wars
French Revolutionary Wars
The French Revolutionary Wars were a series of major conflicts, from 1792 until 1802, fought between the French Revolutionary government and several European states...
, Great Britain and allied European powers declared war on France over French occupation of the Rhine delta and Antwerp. Britain remained in conflict with France for almost 22 years, during which time significant progress was achieved in artillery development. The first two troops of Horse Artillery (A –later entitled "The Chestnut Troop"– and B) were raised in January 1793 at Goodwood, Sussex, by the Master-General of Ordnance, the third Duke of Richmond, to provide fire support for the cavalry
Cavalry
Cavalry or horsemen were soldiers or warriors who fought mounted on horseback. Cavalry were historically the third oldest and the most mobile of the combat arms...
. They were joined by two more troops in November 1793. Each troop had six 6-pounder guns. All RHA personnel were mounted. Included in the establishment were 45 drivers and 187 horses, making it the first self-contained fighting unit of artillery.

Initially, horses were hired with civilian drivers. In 1794 a Driver Corps was raised which, however, did not formally become a unit of the Royal Artillery until after Waterloo. There were many disadvantages of the divided control until horses and drivers were organised into the RHA troops. Another development was the formation of a headquarter staff providing a channel between the regiment and the Board of Ordnance
Board of Ordnance
The Board of Ordnance was a British government body responsible for the supply of armaments and munitions to the Royal Navy and British Army. It was also responsible for providing artillery trains for armies and maintaining coastal fortresses and, later, management of the artillery and engineer...
. Captain John Macleod was the first Brigade Major and became the first Deputy-Adjutant-General in 1795. By 1806, eleven troops had been formed, with ten companies of the Royal Irish Artillery incorporated, as the Seventh Battalion, after the union with Ireland in 1801
Act of Union 1800
The Acts of Union 1800 describe two complementary Acts, namely:* the Union with Ireland Act 1800 , an Act of the Parliament of Great Britain, and...
.

The regiment wore light cavalry uniforms of blue with gold lace and red facings. Their overalls were grey with a red stripe and on their heads they wore the distinctive "Tarleton" helmets. If needed, they carried 1796 light-cavalry sabres.

The RHA has acquitted itself with distinction in the great wars of two centuries, the Napoleonic Wars
Napoleonic Wars
The Napoleonic Wars were a series of wars declared against Napoleon's French Empire by opposing coalitions that ran from 1803 to 1815. As a continuation of the wars sparked by the French Revolution of 1789, they revolutionised European armies and played out on an unprecedented scale, mainly due to...
, the Indian Mutiny, the Crimean War
Crimean War
The Crimean War was a conflict fought between the Russian Empire and an alliance of the French Empire, the British Empire, the Ottoman Empire, and the Kingdom of Sardinia. The war was part of a long-running contest between the major European powers for influence over territories of the declining...
, the Peninsular War
Peninsular War
The Peninsular War was a war between France and the allied powers of Spain, the United Kingdom, and Portugal for control of the Iberian Peninsula during the Napoleonic Wars. The war began when French and Spanish armies crossed Spain and invaded Portugal in 1807. Then, in 1808, France turned on its...
, the Anglo-Zulu War
Anglo-Zulu War
The Anglo-Zulu War was fought in 1879 between the British Empire and the Zulu Kingdom.Following the imperialist scheme by which Lord Carnarvon had successfully brought about federation in Canada, it was thought that a similar plan might succeed with the various African kingdoms, tribal areas and...
, the Boer War
Boer War
The Boer Wars were two wars fought between the British Empire and the two independent Boer republics, the Oranje Vrijstaat and the Republiek van Transvaal ....
, World War I
World War I
World War I , which was predominantly called the World War or the Great War from its occurrence until 1939, and the First World War or World War I thereafter, was a major war centred in Europe that began on 28 July 1914 and lasted until 11 November 1918...
and World War II
World War II
World War II, or the Second World War , was a global conflict lasting from 1939 to 1945, involving most of the world's nations—including all of the great powers—eventually forming two opposing military alliances: the Allies and the Axis...
.

When the Territorial Force
Territorial Force
The Territorial Force was the volunteer reserve component of the British Army from 1908 to 1920, when it became the Territorial Army.-Origins:...
was created in 1908 artillery units of the old Volunteer Force
Volunteer Force (Great Britain)
The Volunteer Force was a citizen army of part-time rifle, artillery and engineer corps, created as a popular movement in 1859. Originally highly autonomous, the units of volunteers became increasingly integrated with the British Army after the Childers Reforms in 1881, before forming part of the...
were converted into foot, horse, and garrison batteries. There were 14 batteries of horse artillery, 12 of which belonged to the RHA and the remaining two provided by the Honourable Artillery Company
Honourable Artillery Company
The Honourable Artillery Company was incorporated by Royal Charter in 1537 by King Henry VIII. Today it is a Registered Charity whose purpose is to attend to the “better defence of the realm"...
. Territorial batteries were of four guns each rather than the six guns of regular batteries. The principal weapon of Territorial RHA units was the Ordnance QF 15 pounder
Ordnance QF 15 pounder
The Ordnance QF 15 pounder gun, commonly referred to as the Ehrhardt, was a modern German field gun purchased by Britain in 1900 as a stopgap measure to upgrade its field artillery to modern QF standards, while it developed its own alternative...
although the Ordnance BLC 15 pounder
Ordnance BLC 15 pounder
The Ordnance BLC 15 pounder gun was a modernised version of the obsolete BL 15 pounder 7 cwt gun, incorporating a recoil and recuperator mechanism above the barrel and modified quicker-opening breech...
was issued to some second line RHA units formed in 1914.

At the outbreak of World War I
World War I
World War I , which was predominantly called the World War or the Great War from its occurrence until 1939, and the First World War or World War I thereafter, was a major war centred in Europe that began on 28 July 1914 and lasted until 11 November 1918...
the regular RHA comprised twenty four batteries, eleven of those serving in India with the Indian Army
British Indian Army
The British Indian Army, officially simply the Indian Army, was the principal army of the British Raj in India before the partition of India in 1947...
. They were equipped with the Ordnance QF 13 pounder
Ordnance QF 13 pounder
The Ordnance QF 13-pounder quick-firing field gun was the standard equipment of the British Royal Horse Artillery at the outbreak of World War I.-History:...
.

In the 1920s, development of trucks and track vehicles brought an end to operational use of horses. By 1927, medium artillery was drawn by tractors instead of heavy draught horses. By 1937, nine field brigades had been mechanised as well as a brigade of RHA. Today, the ceremonial King's Troop alone retains the glamour of the mounted batteries.

At the onset of World War II, recruits were instructed that

. . .the role of the Royal Artilleryman is, as it has ever been, to fight his gun, forgetful of self, to the last round in support of other arms.

There are currently four separate regiments that wear the cypher (cap badge
Cap badge
A cap badge, also known as head badge or hat badge, is a badge worn on uniform headgear and distinguishes the wearer's nationality and/or organisation. The wearing of cap badges is a convention commonly found among military and police forces, as well as uniformed civilian groups such as the Boy...
) of the RHA:

Within the Royal Artillery structure, posting between the RA and the RHA is fairly common.

The Royal Horse Artillery has provided the Queen's Guard
Queen's Guard
The Queen's Guard and Queen's Life Guard are the names given to contingents of infantry and cavalry soldiers charged with guarding the official royal residences in London...
on three occasions:

When on parade
Parade
A parade is a procession of people, usually organized along a street, often in costume, and often accompanied by marching bands, floats or sometimes large balloons. Parades are held for a wide range of reasons, but are usually celebrations of some kind...
with its guns, the Royal Horse Artillery takes precedence over every other regiment and corps in the British Army, and parades at the right of the line. Otherwise, it immediately follows the Household Cavalry
Household Cavalry
The term Household Cavalry is used across the Commonwealth to describe the cavalry of the Household Divisions, a country’s most elite or historically senior military groupings or those military groupings that provide functions associated directly with the Head of state.Canada's Governor General's...
.