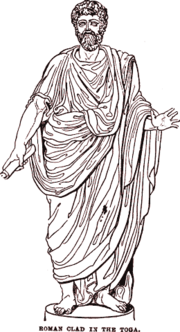 Citizenship in ancient Rome
Ancient Rome
Ancient Rome was a thriving civilization that grew on the Italian Peninsula as early as the 8th century BC. Located along the Mediterranean Sea and centered on the city of Rome, it expanded to one of the largest empires in the ancient world....
was a privileged political and legal status afforded to certain free-born individuals with respect to laws, property, and governance.

In the Roman Republic
Roman Republic
The Roman Republic was the period of the ancient Roman civilization where the government operated as a republic. It began with the overthrow of the Roman monarchy, traditionally dated around 508 BC, and its replacement by a government headed by two consuls, elected annually by the citizens and...
and later in the Roman Empire
Roman Empire
The Roman Empire was the post-Republican period of the ancient Roman civilization, characterised by an autocratic form of government and large territorial holdings in Europe and around the Mediterranean....
, people resident within the Roman state could roughly be divided into several classes:


It is difficult to offer meaningful generalities across the entire Roman period, as the nature and availability of citizenship was affected by legislation, for example, the Lex Iulia.


Roman citizenship was required in order to enlist in the Roman legions, but this was sometimes ignored. Non-citizens joined the Auxilia and gained citizenship through service.

The legal classes varied over time, however the following classes of legal status existed at various times within the Roman state:

The non optimo jure who held the rights of jus commercii and jus connubii (rights of property and marriage), and

The optimo jure, who also held these rights as well as the additional rights of jus suffragiorum and jus honorum (the rights to vote and to hold office).

The Latini were a class of citizens who held the Latin Right
Latin Right
Latin Rights was a civic status given by the Romans, intermediate between full Roman citizenship and non-citizen status , and extended originally to the people of Latium . The most important Latin Rights were commercium, connubium, and ius migrationis...
s (jus Latii), or the rights of jus commercii and ius migrationis, but not the jus connubii. The term Latini originally referred to the Latins
Latins
"Latins" refers to different groups of people and the meaning of the word changes for where and when it is used.The original Latins were an Italian tribe inhabiting central and south-central Italy. Through conquest by their most populous city-state, Rome, the original Latins culturally "Romanized"...
, citizens of the Latin League
Latin league
The Latin League was a confederation of about 30 villages and tribes in the region of Latium near ancient Rome, organized for mutual defense...
who came under Roman control at the close of the Latin War
Latin War
The Latin War was a conflict between the Roman Republic and its neighbors the Latin peoples of ancient Italy. It ended in the dissolution of the Latin League, and incorporation of its territory into the Roman sphere of influence, with the Latins gaining partial rights and varying levels of...
, but eventually became a legal description rather than a nationalistic or ethnic one. Freedmen slaves, those of the Cives Romani convicted of crimes, or citizens settling Latin colonies could be given this status under the law.

Socii or Foederati were citizens of states which had treaty obligations with Rome, typically agreements under which certain legal rights of the state's citizens under Roman law were exchanged for agreed upon levels of military service, i.e. the Roman magistrates had the right to levy soldiers for the Roman legion
Roman legion
A Roman legion normally indicates the basic ancient Roman army unit recruited specifically from Roman citizens. The organization of legions varied greatly over time but they were typically composed of perhaps 5,000 soldiers, divided into maniples and later into "cohorts"...
s from those states. However, Foederati states that had at one time been conquered by Rome were exempt from payment of tribute to Rome due to their treaty status.

Growing dissatisfaction with the rights afforded to the Socii, and with the growing manpower demands of the legions (due to the protracted Jugurthine War
Jugurthine War
The Jugurthine War takes its name from the Berber king Jugurtha , nephew and later adopted son of Micipsa, King of Numidia.-Jugurtha and Numidia:...
and the Cimbrian War
Cimbrian War
The Cimbrian War was fought between the Roman Republic and the Proto-Germanic tribes of the Cimbri and the Teutons , who migrated from northern Europe into Roman controlled territory, and clashed with Rome and her allies...
) led eventually to the Social War of 91–88 BC in which the Italian allies revolted against Rome.

The passing of the Lex Julia
Lex Julia
Lex Julia are ancient Roman laws, introduced by any member of the Julian family....
(more specifically the Lex Iulia de Civitate Latinis Danda) in 90 BC granted the rights of the cives romani to all latini and socii states that had not participated in the Social War, or who were willing to cease hostilities immediately. This was eventually extended to all of the Italian Socii states following the conclusion of the war (with the exception of Gallia Cisalpina), effectively eliminating socii and latini as legal and citizenship definitions.

A Peregrinus
Peregrinus (Roman)
Peregrinus was the term used during the early Roman empire, from 30 BC to 212 AD, to denote a free provincial subject of the Empire who was not a Roman citizen. Peregrini constituted the vast majority of the Empire's inhabitants in the 1st and 2nd centuries AD...
(plural Peregrini) was originally the term used to describe any person who was not a full Roman citizen, that is someone who was not a member of the Cives Romani. With the expansion of Roman law to include more gradations of legal status, this term became less used, but the term peregrini included the those of the latini, socii, and provinciales, as well as those subjects of foreign states.


Citizenship as a tool of Romanization

Roman citizenship was also used as a tool of foreign policy and control. Colonies and political allies would be granted a "minor" form of Roman citizenship, there being several graduated levels of citizenship and legal rights (the Latin Right
Latin Right
Latin Rights was a civic status given by the Romans, intermediate between full Roman citizenship and non-citizen status , and extended originally to the people of Latium . The most important Latin Rights were commercium, connubium, and ius migrationis...
was one of them). The promise of improved standing within the Roman "sphere of influence", and the rivalry for standing with one's neighbours, kept the focus of many of Rome's neighbours and allies centered on the status quo of Roman culture, rather than trying to subvert or overthrow Rome's influence.

The granting of citizenship to allies and the conquered was a vital step in the process of Romanization
Romanization (cultural)
Romanization or latinization indicate different historical processes, such as acculturation, integration and assimilation of newly incorporated and peripheral populations by the Roman Republic and the later Roman Empire...
. This step was one of the most effective political tools and (at that point in history) original political ideas (perhaps one of the most important reasons for the success of Rome).

As a precursor to this, Alexander the Great had tried to "mingle" his Macedonians and other Greeks with the Persians, Egyptians, Syrians, etc in order to assimilate the people of the conquered Persian Empire, but after his death this policy was largely ignored by his successors
Diadochi
The Diadochi were the rival generals, family and friends of Alexander the Great who fought for the control of Alexander's empire after his death in 323 BC...
. The idea was to assimilate
Cultural assimilation
Cultural assimilation is a socio-political response to demographic multi-ethnicity that supports or promotes the assimilation of ethnic minorities into the dominant culture. The term assimilation is often used with regard to immigrants and various ethnic groups who have settled in a new land. New...
, to turn a defeated and potentially rebellious enemy (or his sons) into a Roman citizen. Instead of having to wait for the unavoidable revolt of a conquered people (a tribe or a city-state) like Sparta
Sparta
Sparta or Lacedaemon, was a prominent city-state in ancient Greece, situated on the banks of the River Eurotas in Laconia, in south-eastern Peloponnese. It emerged as a political entity around the 10th century BC, when the invading Dorians subjugated the local, non-Dorian population. From c...
and the conquered Helots
Helots
The helots: / Heílôtes) were an unfree population group that formed the main population of Laconia and the whole of Messenia . Their exact status was already disputed in antiquity: according to Critias, they were "especially slaves" whereas to Pollux, they occupied a status "between free men and...
, Rome made the "known" (conquered) world Roman.


The Edict of Caracalla

The Edict of Caracalla (officially the Constitutio Antoniniana
Constitutio Antoniniana
The Constitutio Antoniniana was an edict issued in 212 AD, by the Roman Emperor Caracalla...
(Latin: "Constitution [or Edict] of Antoninus") was an edict
Edict
An edict is an announcement of a law, often associated with monarchism. The Pope and various micronational leaders are currently the only persons who still issue edicts.-Notable edicts:...
issued in 212, by the Roman Emperor Caracalla
Caracalla
Caracalla , was Roman emperor from 198 to 217. The eldest son of Septimius Severus, he ruled jointly with his younger brother Geta until he murdered the latter in 211...
which law declared that all free men in the Roman Empire were to be given full Roman citizenship and all free women in Empire were given the same rights as Roman women were. Before 212, for the most part only inhabitants of Italia held full Roman citizenship. Colonies of Romans established in other provinces, Romans (or their descendants) living in provinces, the inhabitants of various cities throughout the Empire, and small numbers of local nobles (such as kings of client countries) held full citizenship also. Provincials, on the other hand, were usually non-citizens, although some held the Latin Right.