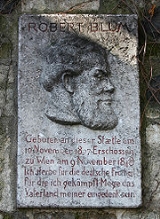 Encyclopedia
Robert Blum was a German democratic politician, publicist, poet, publisher, revolutionist and member of the National Assembly
Frankfurt Parliament
The Frankfurt Assembly was the first freely elected parliament for all of Germany. Session was held from May 18, 1848 to May 31, 1849 in the Paulskirche at Frankfurt am Main...
of 1848. In his fight for a strong, unified Germany he opposed ethnocentrism
Ethnocentrism
Ethnocentrism is the tendency to believe that one's ethnic or cultural group is centrally important, and that all other groups are measured in relation to one's own. The ethnocentric individual will judge other groups relative to his or her own particular ethnic group or culture, especially with...
and it was his strong belief that no one people should rule over another. As such he was an opponent of the Prussia
Prussia
Prussia was a German kingdom and historic state originating out of the Duchy of Prussia and the Margraviate of Brandenburg. For centuries, the House of Hohenzollern ruled Prussia, successfully expanding its size by way of an unusually well-organized and effective army. Prussia shaped the history...
n occupation of Poland and was in contact with the revolutionists there. Blum was likewise a critic of both antisemitism and catholicism
Catholicism
Catholicism is a broad term for the body of the Catholic faith, its theologies and doctrines, its liturgical, ethical, spiritual, and behavioral characteristics, as well as a religious people as a whole....
, supported the German Catholics
German Catholics
The German Catholics were a schismatic sect formed in December 1844 by German dissidents from the Roman Catholic Church, under the leadership of Johannes Ronge.-History:...
and agitated for the equality of the sexes. In spite of his diplomatic immunity
Diplomatic immunity
Diplomatic immunity is a form of legal immunity and a policy held between governments that ensures that diplomats are given safe passage and are considered not susceptible to lawsuit or prosecution under the host country's laws...
as a member of parliament he was illegally arrested during a stay at the hotel "Stadt London" in Vienna and murdered in a summary execution, making him a martyr of the German revolution. 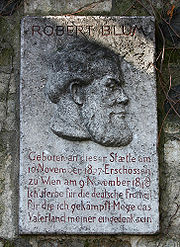 Blum grew up in poverty in Cologne
Cologne
Cologne is Germany's fourth-largest city , and is the largest city both in the Germany Federal State of North Rhine-Westphalia and within the Rhine-Ruhr Metropolitan Area, one of the major European metropolitan areas with more than ten million inhabitants.Cologne is located on both sides of the...
, the son of a failed theologian who made a poor living as a cooper. He was ten years old before he could go to school. After his schooling, he worked as a craftsman in different trades. He failed as a goldsmith's apprentice, but completed an apprenticeship as a gardener. After his journeyman's time, he returned to Cologne to work in a lamp factory. His employer put him to work at the counter since he was good at calculations. In 1829, he followed his employer to Berlin where he also continued his education. His work was interrupted by obligatory military service, and on his release, his poor circumstances obliged him to return to Cologne. There, in 1830, he worked serving in a theater company and started writing politically motivated poetry and plays. When the theater closed in the summer, he worked for a sheriff as a scribe.

The political upheavals of 1830 attracted his interest, and ideals of freedom found their way into his poetry. In 1832, he followed the theater troupe to Leipzig
Leipzig
Leipzig Leipzig has always been a trade city, situated during the time of the Holy Roman Empire at the intersection of the Via Regia and Via Imperii, two important trade routes. At one time, Leipzig was one of the major European centres of learning and culture in fields such as music and publishing...
. There he came in touch with humanist and liberal circles, contributed to the liberal newspaper Zeitung für die elegante Welt and joined Leipzig's freemason lodge
Masonic Lodge
This article is about the Masonic term for a membership group. For buildings named Masonic Lodge, see Masonic Lodge A Masonic Lodge, often termed a Private Lodge or Constituent Lodge, is the basic organisation of Freemasonry...
. By 1840, he had worked his way up to being a cashier in the city theater. That year he also founded the Schiller
Friedrich Schiller
Johann Christoph Friedrich von Schiller was a German poet, philosopher, historian, and playwright. During the last seventeen years of his life , Schiller struck up a productive, if complicated, friendship with already famous and influential Johann Wolfgang von Goethe...
verein in Leipzig which celebrated the poet's anniversary as a festival in honor of political liberty.
Beginning in 1839, Blum became a leading figure in the Kingdom of Saxony
Kingdom of Saxony
The Kingdom of Saxony , lasting between 1806 and 1918, was an independent member of a number of historical confederacies in Napoleonic through post-Napoleonic Germany. From 1871 it was part of the German Empire. It became a Free state in the era of Weimar Republic in 1918 after the end of World War...
's national-liberal circles; as a gifted orator and organizer, he helped establish Saxony's opposition movement as a serious political force. His initial attempt at a newsletter was suppressed by the censor, but another one continued for four years with occasional lapses due to the censor. He became a German Catholic when Johannes Ronge came to Leipzig, and wrote on that movement's behalf. In 1845, Blum organized the first German Catholic synod
Synod
A synod historically is a council of a church, usually convened to decide an issue of doctrine, administration or application. In modern usage, the word often refers to the governing body of a particular church, whether its members are meeting or not...
in Leipzig that marked the beginning of Germany's humanist free religious movement. In 1844, he gave up his theater job to found a book store.

In 1845, the presence of John of Saxony stirred the masses and the military fired on them. At a turbulent meeting of armed citizens and students of Leipzig, Blum dissuaded them from storming the barracks, and urged conformity to the law. This resulted in his being elected a representative in Leipzig's government.

Blum embraced the upheavals of 1848. He was one of the presidents of the preliminary parliament at Frankfurt
Frankfurt
Frankfurt am Main , commonly known simply as Frankfurt, is the largest city in the German state of Hesse and the fifth-largest city in Germany, with a 2010 population of 688,249. The urban area had an estimated population of 2,300,000 in 2010...
which he dominated with his energy, imposing figure and pithy speeches. As a member of the succeeding parliament
Frankfurt Parliament
The Frankfurt Assembly was the first freely elected parliament for all of Germany. Session was held from May 18, 1848 to May 31, 1849 in the Paulskirche at Frankfurt am Main...
and leader of the left, he worked to contain the most radical elements. Blum's trustworthiness was questioned when the extreme leftist Arnold Ruge
Arnold Ruge
Arnold Ruge was a German philosopher and political writer.-Studies in university and prison:Born in Bergen auf Rügen, he studied in Halle, Jena and Heidelberg. As an advocate of a free and united Germany he was jailed for five years in 1825 in the fortress of Kolberg, where he studied Plato and...
claimed Blum had moved toward his side. As the leader of the radical liberal fraction, he strongly opposed the Malmö Treaty
Schleswig-Holstein Question
The Schleswig-Holstein Question was a complex of diplomatic and other issues arising in the 19th century from the relations of two duchies, Schleswig and Holstein , to the Danish crown and to the German Confederation....
between Denmark
Denmark
Denmark is a Scandinavian country in Northern Europe. The countries of Denmark and Greenland, as well as the Faroe Islands, constitute the Kingdom of Denmark . It is the southernmost of the Nordic countries, southwest of Sweden and south of Norway, and bordered to the south by Germany. Denmark...
and Prussia
Prussia
Prussia was a German kingdom and historic state originating out of the Duchy of Prussia and the Margraviate of Brandenburg. For centuries, the House of Hohenzollern ruled Prussia, successfully expanding its size by way of an unusually well-organized and effective army. Prussia shaped the history...
that abolished Schleswig-Holstein
Schleswig-Holstein
Schleswig-Holstein is the northernmost of the sixteen states of Germany, comprising most of the historical duchy of Holstein and the southern part of the former Duchy of Schleswig...
's democratically elected government. He was also one of the most vocal supporters of popular sovereignty
Sovereignty
Sovereignty is the quality of having supreme, independent authority over a geographic area, such as a territory. It can be found in a power to rule and make law that rests on a political fact for which no purely legal explanation can be provided...
.
In October, when revolutionary fighting
Vienna Uprising
The Vienna Uprising or October Revolution of October 1848 was the last uprising in the Austrian Revolution of 1848....
broke out in Vienna
Vienna
Vienna is the capital and largest city of the Republic of Austria and one of the nine states of Austria. Vienna is Austria's primary city, with a population of about 1.723 million , and is by far the largest city in Austria, as well as its cultural, economic, and political centre...
, Blum travelled there and joined the revolutionary forces. On the surrender of the capital to Windischgrätz, Blum was arrested with several of his companions on 4 November. Brought before a military tribunal, he pleaded in vain his privileges as a deputy from the German Diet and was condemned to be hanged, a sentence which was changed to death by the bullet. He was executed on 9 November. His death became a symbol for the futility of Germany's 1848 rebellion; the day of his death marks the first of a series of events that led to November 9 being referred to as Germany's Schicksalstag
Schicksalstag
9 November has been the date of several important events in German history. The term Schicksalstag has been occasionally used by historians and journalists since shortly after World War II, but its current widespread use started with the events of 1989 when virtually all German media picked...
(fateful day).

His son Hans Blum
Hans Blum
Hans Blum was a German journalist and writer.-Biography:Born Johann Georg Maximillian Blum, he was a son of Robert Blum, and was educated in the universities of Leipzig and Bern, sat in the North German Reichstag 1867-70, and was a barrister in Leipzig 1869-1897...
was a noted writer and journalist.