Encyclopedia
The Rizal Monument is a memorial monument
Monument
A monument is a type of structure either explicitly created to commemorate a person or important event or which has become important to a social group as a part of their remembrance of historic times or cultural heritage, or simply as an example of historic architecture...
in Rizal Park
Rizal Park
Rizal Park, also known as Luneta Park or colloquially Luneta, is a historical urban park located in the heart of the city of Manila, Philippines, adjacent to the old walled city of Manila, now Intramuros. Since the Spanish Colonial Era, the park has been a favorite spot for unwinding, socializing,...
in Manila
Manila
Manila is the capital of the Philippines. It is one of the sixteen cities forming Metro Manila.Manila is located on the eastern shores of Manila Bay and is bordered by Navotas and Caloocan to the north, Quezon City to the northeast, San Juan and Mandaluyong to the east, Makati on the southeast,...
, Philippines
Philippines
The Philippines , officially known as the Republic of the Philippines , is a country in Southeast Asia in the western Pacific Ocean. To its north across the Luzon Strait lies Taiwan. West across the South China Sea sits Vietnam...
built to commemorate the Filipino
Filipino people
The Filipino people or Filipinos are an Austronesian ethnic group native to the islands of the Philippines. There are about 92 million Filipinos in the Philippines, and about 11 million living outside the Philippines ....
nationalist, José Rizal
José Rizal
José Protacio Rizal Mercado y Alonso Realonda , was a Filipino polymath, patriot and the most prominent advocate for reform in the Philippines during the Spanish colonial era. He is regarded as the foremost Filipino patriot and is listed as one of the national heroes of the Philippines by...
. The mausoleum
Mausoleum
A mausoleum is an external free-standing building constructed as a monument enclosing the interment space or burial chamber of a deceased person or persons. A monument without the interment is a cenotaph. A mausoleum may be considered a type of tomb or the tomb may be considered to be within the...
consists of a standing bronze
Bronze
Bronze is a metal alloy consisting primarily of copper, usually with tin as the main additive. It is hard and brittle, and it was particularly significant in antiquity, so much so that the Bronze Age was named after the metal...
sculpture
Sculpture
Sculpture is three-dimensional artwork created by shaping or combining hard materials—typically stone such as marble—or metal, glass, or wood. Softer materials can also be used, such as clay, textiles, plastics, polymers and softer metals...
of the martyr
Martyr
A martyr is somebody who suffers persecution and death for refusing to renounce, or accept, a belief or cause, usually religious.-Meaning:...
, with an obelisk
Obelisk
An obelisk is a tall, four-sided, narrow tapering monument which ends in a pyramid-like shape at the top, and is said to resemble a petrified ray of the sun-disk. A pair of obelisks usually stood in front of a pylon...
as his backdrop, set on a pedestal upon which his remains are interred. A plaque on the pedestal front reads: "To the memory of José Rizal, patriot and martyr, executed at Bagumbayan Field December 30th, 1896, this monument is dedicated by the people of the Philippine Islands".

The perimeter of the monument is in a continuous ritual guarding by the soldiers known as the Kabalyeros de Rizal (Knights of Rizal). About a 100 m (328.1 ft) west of the monument is the exact location where Rizal was executed represented by life-size diorama
Diorama
The word diorama can either refer to a nineteenth century mobile theatre device, or, in modern usage, a three-dimensional full-size or miniature model, sometimes enclosed in a glass showcase for a museum...
s of his final moments.

The Rizal Monument was planned and constructed during the American colonial period of the Philippines in the early 20th century.

On September 28, 1901, the United States Philippine Commission
Philippine Commission
The Philippine Commission was a body appointed by the President of the United States to exercise legislative and limited executive powers in the Philippines. It was first appointed by President William McKinley in 1901. Beginning in 1907, it acted as the upper house of a bicameral Philippine...
approved Act No. 243, that granted the right to use public land upon the Luneta in the city of Manila, where the monument was erected to commemorate the memory of José Rizal, Philippine patriot, writer and poet. The act stated that the monument would not only bear a statue of the hero, but would also house his remains. The act also created a committee on the Rizal monument that consisted of Pascual Poblete, Paciano Rizal (the hero’s brother), Juan Tuason, Teodoro R. Yangco, Mariano Limjap, Máximo Paterno, Ramón Genato, Tomás G. del Rosario, and Ariston Bautista. The members were tasked, among others, with raising funds through popular subscriptions.

The committee held an international design competition between 1905–1907 and invited sculptors from Europe and the United States to submit entries with material preference produced in the archipelago. The estimated cost of the monument was ₱100,000. The insular government donated ₱30,000 for the fund. By January 1905, that goal had been oversubscribed. When the campaign closed in August 1912, the amount collected had reached ₱135,195.61.

On January 8, 1908, the judging committee composed of then Governor-General
Governor-General of the Philippines
The Governor-General of the Philippines was the title of the government executive during the colonial period of the Philippines, governed mainly by Spain and the United States, and briefly by Great Britain, from 1565 to 1935....
James F. Smith, John T. MacLeod and Dr. Maximo M. Paterno, officially announced its decision through the press. The first-prize winner was Carlos Nicoli of Carrara, Italy for his scaled plaster model titled “Al Martir de Bagumbayan” (To the Martyr of Bagumbayan) besting 40 other accepted entries. Nicoli won the ₱ 5,000.00 first prize for his design depicting a monument rising 18 metres (59.1 ft) high with a base of 12 metres (39.4 ft). The base was to be rendered in two shades of gray marble while the pedestal, in two shades of white marble. Among his other plans were the use of marble from Italy and the incorporation of more elaborate figurative elements.

The contract was awarded to second-placer Swiss sculptor named Richard Kissling
Richard Kissling
Richard Kissling was a Swiss sculptor.Born in Wolfwil, Switzerland, Kissling went through apprenticeship as a plasterer before moving to Rome for 13 years, studying under the sculptor Ferdinand Schlöth. At the 1883 National Exhibition in Zurich, Kissling showed a portrait bust of the Swiss...
for his “Motto Stella” (Guiding Star). Many accounts explained why the contract landed to Kissling, one is Nicoli’s inability to post the required performance bond of P20,000 for the duration of the monument’s construction. Some sources say that Nicoli failed to show up at the designated date for the signing of the job contract. Another narrative declared Kissling's quotation was lower than that of Prof. Nicoli’s. A complaint was reportedly filed by Nicoli through the courts of justice.

Some of the local press lambasted Kissling’s model. It was satirized in a cartoon and labeled vulgar y tosco, meaning “lousy.” The constituents of the Jury of Awards – none of whom were artists, architects nor engineers – were also questioned. There were plans for the famous Filipino painter Félix Resurrección Hidalgo
Felix Resurreccion Hidalgo
Félix Resurrección Hidalgo y Padilla was a Filipino artist. He is acknowledged as one of the great Filipino painters of the late 19th century, and is significant in Philippine history for having been an acquaintance and inspiration for members of the Philippine reform movement which included José...
to inspect and modify the design. However, the latter was ultimately left “as it is” since the bronze of the statues had already been cast in Switzerland.

More than twelve years after the Philippine Commissions approval of the Act, the shrine was finally unveiled on December 30, 1913 during Rizal’s 17th death anniversary. His poem, now popularly known as "Mi Ultimo Adios
Mi último adiós
"Mi último adiós" is a poem written by Philippine national hero José Rizal on the eve of his execution on December 30, 1896. Although the poem was untitled, this title served as an artifice useful as a quick reference. This poem was one of the last notes he wrote before his execution...
" ("My Last Farewell") is inscribed on the memorial plaque.

During World War II
World War II
World War II, or the Second World War , was a global conflict lasting from 1939 to 1945, involving most of the world's nations—including all of the great powers—eventually forming two opposing military alliances: the Allies and the Axis...
in 1943, the Japanese government issued 'invasion money' to occupied territories in the Pacific area of operations, one of which was the Philippines. Out of three series, the second was issued in 1, 5, 10, and 100 Peso only. All have the Rizal monument vignette on the banknote
Banknote
A banknote is a kind of negotiable instrument, a promissory note made by a bank payable to the bearer on demand, used as money, and in many jurisdictions is legal tender. In addition to coins, banknotes make up the cash or bearer forms of all modern fiat money...
. 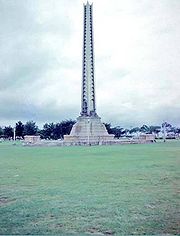 In Rizal's birth centenary year of 1961, a stainless steel pylon was superimposed over the granite obelisk, increasing the structure's height from 12.7 meters to 30.5 meters. The remodeling undertaken by the Jose Rizal National Centennial Commission (JRNCC) was widely criticized. Many found the gleaming modern steel shaft incompatible with the somber granite base. Moreover, the latter seemed to dwarf the much smaller Rizal figure. Others simply dislike the idea of tampering with a popular and traditional image.

The designer of the remodeling was Juan Nakpil
Juan Nakpil
Juan F. Nakpil was a Filipino architect, teacher and a community leader. In 1973, he was named one of the National Artists for architecture, and tapped as the Dean of Filipino Architects....
, who later became the country's first National Artist for Architecture
National Artist of the Philippines
A National Artist of the Philippines is a title given to a Filipino who has been given the highest recognition for having made significant contributions to the development of Philippine arts...
. He quoted former Secretary of Education and JRNCC chair Manuel Lim as envisioning the pylon as a convenient guide for incoming boats, and for the people lost in their way around the city.

The P145,000 shaft was removed two years later under the request of Secretary of Education Alejandro Roces and Director of Public Libraries Carlos Quirino. It was dismantled during Holy Week, reportedly to prevent any court injunction from restraining them as government offices were closed during holidays. The pylon is now located at the median of the Baclaran
Baclaran
Baclaran is a barangay located on the border of Parañaque and Pasay in Metro Manila, Philippines.The area is well-known for the National Shrine of Our Mother of Perpetual Help also known as the Redemptorist Church or Baclaran Church, dedicated to Our Mother of Perpetual Help. There is also a...
section of Roxas Boulevard
Roxas Boulevard
Roxas Boulevard is a boulevard in Metro Manila, and an eight-lane arterial road that connects the center of Manila with Pasay City, Parañaque City. It is one of the major arteries in the city's metropolitan network, designated as Radial Road 1...
.