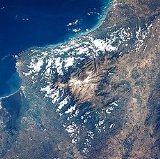 Encyclopedia
The Sierra Nevada de Santa Marta (Snowy Mountain Range of Saint Martha
Martha
Martha of Bethany is a biblical figure described in the Gospels of Luke and John. Together with her siblings Lazarus and Mary, she is described as living in the village of Bethany near Jerusalem...
) is an isolated mountain range apart from the Andes
Andes
The Andes is the world's longest continental mountain range. It is a continual range of highlands along the western coast of South America. This range is about long, about to wide , and of an average height of about .Along its length, the Andes is split into several ranges, which are separated...
chain that runs through Colombia
Colombia
Colombia, officially the Republic of Colombia , is a unitary constitutional republic comprising thirty-two departments. The country is located in northwestern South America, bordered to the east by Venezuela and Brazil; to the south by Ecuador and Peru; to the north by the Caribbean Sea; to the...
. Reaching an altitude of 5,700 metres above sea level just 42 km from the Caribbean coast, the Sierra Nevada is the world's highest coastal range. The Sierra Nevada encompasses about 17,000 km² and serves as the source of 36 rivers. Its range covers the Magdalena Department
Magdalena Department
Magdalena is a department of Colombia, located to the north of the country by the Caribbean Sea. The capital of the Magdalena Department is Santa Marta and was named after the Magdalena River...
, Cesar Department
Cesar Department
Cesar Department or simply Cesar is a department of Colombia located in the north of the country in the Caribbean region, bordering to the north with the Department of La Guajira, to the west with the Department of Magdalena and Department of Bolivar, to the south with Department of Santander, to...
and La Guajira Department.

The highest point of the Sierra Nevada group (and Colombia in general) may be either Pico Cristóbal Colón
Pico Cristóbal Colón
Pico Cristóbal Colón is the highest mountain in Colombia and the fifth most prominent in the world . The nearest peak that is higher is Cayambe, some away. There is a permanent snowcap on this peak and on the nearby mountains. It is part of the Sierra Nevada de Santa Marta range, along with Pico...
or Pico Simón Bolívar; it has yet to be determined which is higher. SRTM data and local topographic maps show that their true elevations are approximately 5,700 metres, lower than the 5,775 metre elevation that is often quoted.

The Sierra Nevada is a compact group, relatively small in area, and completely surrounded by lands with elevations below 200 metres. The main backbone of the Andes cannot be reached from the Sierra Nevada without dropping below this level. This makes its highest point the world's fifth most prominent
Topographic prominence
In topography, prominence, also known as autonomous height, relative height, shoulder drop , or prime factor , categorizes the height of the mountain's or hill's summit by the elevation between it and the lowest contour line encircling it and no higher summit...
summit.

The Sierra Nevada de Santa Marta is home to a number of ecoregion
Ecoregion
An ecoregion , sometimes called a bioregion, is an ecologically and geographically defined area that is smaller than an ecozone and larger than an ecosystem. Ecoregions cover relatively large areas of land or water, and contain characteristic, geographically distinct assemblages of natural...
s, which vary with elevation.

The Santa Marta montane forests lie above 500–800 meters elevation. The montane forests are separated from other moist forests by the lower-elevation dry forests and xeric shrublands, and have large numbers of endemic
Endemic (ecology)
Endemism is the ecological state of being unique to a defined geographic location, such as an island, nation or other defined zone, or habitat type; organisms that are indigenous to a place are not endemic to it if they are also found elsewhere. For example, all species of lemur are endemic to the...
species. The montane forests ecoregion has several distinct plant communities, distinguished by altitude and rainfall; moist lowland forests cover the windward northern and western flanks of the range between 500 and 900 meters elevation, and the drier eastern and southern flanks from 800 to 1000 meters elevation. Above 900 meters elevation is a transitional forest zone of smaller trees and palms. Cloud forest
Cloud forest
A cloud forest, also called a fog forest, is a generally tropical or subtropical evergreen montane moist forest characterized by a persistent, frequent or seasonal low-level cloud cover, usually at the canopy level. Cloud forests often exhibit an abundance of mosses covering the ground and...
s occur above 1000 meters elevation; the Sub-Andean forests from 1000-1150 to 2500 meters elevation form a canopy 25–35 meters tall, while the higher-elevation Andean forests, between 2500 and 3300 meters elevation, grow to 15–20 meters in height. 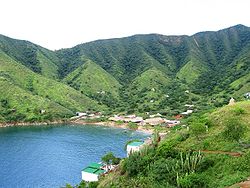 It is composed of Cretaceous metamorphic rocks (predominantly schists and gneisses) and quartzdioritic intrusives of Tertiary age. The Quaternary of the Sierra Nevada de Santa Marta is mainly represented by colluvial-alluvial valley fill and by recent beach deposits. The coastlines of the northwestern part of the Sierra Nevada de Santa Marta are indented, reflecting the alternation of rocky headlands and deep, NNW trending tectonically controlled bays. The headlands are typically 100 to 150-m-high plunging cliffs cut into schists and granites, whereas the embayments front alluvial valley deposits. The bay shores are typically steep, reflective beaches composed of very coarse sand to granules eroded from adjacent cliffs and alluvial deposits. Wide pocket beaches and tombolos are common along sectors with abundant rocky erosional remnants and stacks.

The Sierra Nevada de Santa Marta is home to the remnants of the native American
Indigenous peoples of the Americas
The indigenous peoples of the Americas are the pre-Columbian inhabitants of North and South America, their descendants and other ethnic groups who are identified with those peoples. Indigenous peoples are known in Canada as Aboriginal peoples, and in the United States as Native Americans...
Tairona Culture
Tairona
Tairona was a group of chiefdoms in the region of Sierra Nevada de Santa Marta in present-day Cesar, Magdalena and La Guajira Departments of Colombia, South America, which goes back at least to the 1st century AD and had significant demographic growth around the 11th century.The Tairona people...
; Arhuacos
Arhuacos
The Arhuaco people, also called the Aruacos, Ica, Ijca or Bintuk, names of a Native American ethnic group part of the Chibcha family, descendents of the Tairona Culture concentrated in northern Colombia in the Sierra Nevada de Santa Marta.-Territory:The Arhuacos live in the upper valleys of the...
, Koguis
Koguis
The Kogi or Cogui or Kaggabba, translated "jaguar" in the Kogi language are a Native American ethnic group that lives in the Sierra Nevada de Santa Marta in Colombia. They are one of the few surviving Pre-Columbian civilizations of South America...
, Wiwas and Kankuamos, that live in Resguardos Indigenas (Indian reserves) located in the mid-highlands. 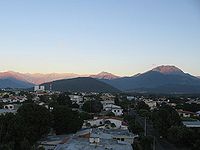 For the last ten years, access to the highest summits has been very difficult, and this situation continues http://www.andes.org.uk/peak-info-5000/colon-colombia-info.htm. There have been no documented recent ascents. The only safe and relatively straight forward access is from Santa Marta city to Cuchillo de San Lorenzo, but that is only to 2,800 metres although allows excellent views of the peaks.