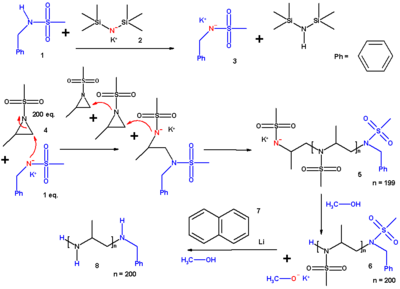 In polymer chemistry
Polymer chemistry
Polymer chemistry or macromolecular chemistry is a multidisciplinary science that deals with the chemical synthesis and chemical properties of polymers or macromolecules. According to IUPAC recommendations, macromolecules refer to the individual molecular chains and are the domain of chemistry...
, ring-opening polymerization is a form of chain-growth polymerization, in which the terminal end of a polymer acts as a reactive center
Reactive center
A reactive center in chemistry is a particular location, usually an atom, within a chemical compound that is the likely center of a reaction in which the chemical is involved. In chain-growth polymer chemistry this is also the point of propagation for a growing chain. The reactive center is...
, where further cyclic monomers
Cyclic compound
In chemistry, a cyclic compound is a compound in which a series of atoms is connected to form a loop or ring.While the vast majority of cyclic compounds are organic, a few inorganic substances form cyclic compounds as well, including sulfur, silanes, phosphanes, phosphoric acid, and triboric acid. ...
join to form a larger polymer chain through ionic propagation. The treatment of some cyclic compounds with catalysts brings about cleavage of the ring followed by polymerization to yield high-molecular-weight polymers. Exemplary polymers produced by this method include:

When the active center is a carbanion
Carbanion
A carbanion is an anion in which carbon has an unshared pair of electrons and bears a negative charge usually with three substituents for a total of eight valence electrons. The carbanion exists in a trigonal pyramidal geometry. Formally a carbanion is the conjugate base of a carbon acid.where B...
, the reaction is an anionic ring-opening polymerization. This is the case of the polypropylene oxide.

A different type of ring-opening polymerization, based on olefin metathesis
Olefin metathesis
Olefin metathesis or transalkylidenation is an organic reaction that entails redistribution of alkylene fragments by the scission of carbon - carbon double bonds in olefins . Its advantages include the creation of fewer sideproducts and hazardous wastes. Yves Chauvin, Robert H. Grubbs, and Richard R...
, uses catalysts rather than cationic or anionic propagation.