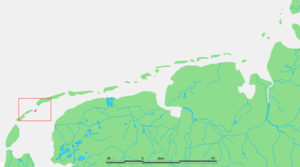 Richel, or rather De Richel (Dutch
Dutch language
Dutch is a West Germanic language and the native language of the majority of the population of the Netherlands, Belgium, and Suriname, the three member states of the Dutch Language Union. Most speakers live in the European Union, where it is a first language for about 23 million and a second...
for "the ridge"), is a permanently dry sandbank
Shoal
Shoal, shoals or shoaling may mean:* Shoal, a sandbank or reef creating shallow water, especially where it forms a hazard to shipping* Shoal draught , of a boat with shallow draught which can pass over some shoals: see Draft...
in the Wadden Sea
Wadden Sea
The Wadden Sea is an intertidal zone in the southeastern part of the North Sea. It lies between the coast of northwestern continental Europe and the range of Frisian Islands, forming a shallow body of water with tidal flats and wetlands. It is rich in biological diversity...
, in the gap between the Dutch
Netherlands
The Netherlands is a constituent country of the Kingdom of the Netherlands, located mainly in North-West Europe and with several islands in the Caribbean. Mainland Netherlands borders the North Sea to the north and west, Belgium to the south, and Germany to the east, and shares maritime borders...
islands of Vlieland
Vlieland
Vlieland is a municipality in the northern Netherlands. The municipality of Vlieland has only one major town: Oost-Vlieland . It is the second-least densely populated municipality in the Netherlands ....
and Terschelling
Terschelling
Terschelling is a municipality and an island in the northern Netherlands, one of the West Frisian Islands.Waddenislanders are known for their resourcefulness in using anything and everything that washes ashore. With few trees to use for timber, most of the farms and barns are built with masts...
. It is located about 1 kilometer east of the northernmost point of Vlieland and is administered by the municipality of Vlieland. The sandbank has an average surface area of 116 hectares. It is completely flooded only during extremely high tides.

The island is primarily known as the most important breeding place in the Wadden Sea for Grey Seal
Grey Seal
The grey seal is found on both shores of the North Atlantic Ocean. It is a large seal of the family Phocidae or "true seals". It is the only species classified in the genus Halichoerus...
s. More than 300 pups are born on Richel in winter. In summer seals seem to prefer areas more sheltered from human contact. The sandbank is also important as a breeding and feeding area for Ringed Plover
Ringed Plover
The Common Ringed Plover or Ringed Plover is a small plover.Adults are 17-19.5 cm in length with a 35–41 cm wingspan. They have a grey-brown back and wings, a white belly, and a white breast with one black neckband. They have a brown cap, a white forehead, a black mask around the eyes...
s, Kentish Plover
Kentish Plover
The Kentish Plover, Charadrius alexandrinus, is a small wader in the plover bird family. Despite its name, this species no longer breeds in Kent, or even Great Britain...
s, Little Tern
Little Tern
The Little Tern, Sternula albifrons or Sterna albifrons, is a seabird of the tern family Sternidae. It was formerly placed into the genus Sterna, which now is restricted to the large white terns . The former North American and Red Sea S. a...
s and other bird species.

Richel is uninhabited and virtually barren. It is too low to support any permanent vegetation. The sandbank is only able to support some temporary colonisation by the grass
Poaceae
The Poaceae is a large and nearly ubiquitous family of flowering plants. Members of this family are commonly called grasses, although the term "grass" is also applied to plants that are not in the Poaceae lineage, including the rushes and sedges...
species Sand Couch (Elytrigia juncea).

The ferry between Harlingen
Harlingen
Harlingen may mean:* Harlingen, Netherlands, a municipality and city in the province of Friesland* Harlingen, Texas, a city in the United States* Harlingen, New Jersey, an unincorporated village in Montgomery Township, New Jersey, United States...
and Vlieland passes by Richel, making a detour around the sandbank. During low tide, it is possible to walk to the sandbank from Vlieland (see mudflat hiking) although Richel is off-limits to humans due to its importance as a nature area. Boat trips from Vlieland used to be organised daily during the summer tourist season to observe the seal population on Richel.
The source of this article is wikipedia, the free encyclopedia.  The text of this article is licensed under the GFDL.