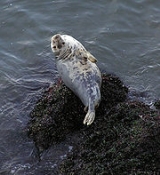 Overview
The grey seal is found on both shores of the North Atlantic Ocean. It is a large seal
Pinniped
Pinnipeds or fin-footed mammals are a widely distributed and diverse group of semiaquatic marine mammals comprising the families Odobenidae , Otariidae , and Phocidae .-Overview: Pinnipeds are typically sleek-bodied and barrel-shaped...
of the family
Family (biology)
In biological classification, family is* a taxonomic rank. Other well-known ranks are life, domain, kingdom, phylum, class, order, genus, and species, with family fitting between order and genus. As for the other well-known ranks, there is the option of an immediately lower rank, indicated by the...
Phocidae or "true seals". It is the only species classified in the genus
Genus
In biology, a genus is a low-level taxonomic rank used in the biological classification of living and fossil organisms, which is an example of definition by genus and differentia...
Halichoerus. Its name is spelled gray seal in the US; it is also known as Atlantic grey seal and the horsehead seal.
It is a large seal, with the bulls reaching 2.5 – long and weighing 170–310 kg (374.8–683.4 lb); the cows are much smaller, typically 1.6 – long and 100 – in weight.

What is the grey seal habitat and what does it eat there?
More
x