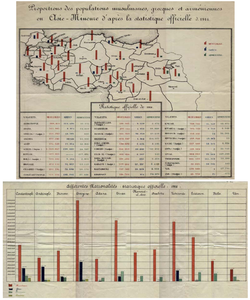 The Republic of Pontus was a proposed Pontian Greek state in the north-eastern part of modern Turkey
Turkey
Turkey , known officially as the Republic of Turkey , is a Eurasian country located in Western Asia and in East Thrace in Southeastern Europe...
from 1917 to 1922. The Republic of Pontus was never officially proclaimed, but a central government of an embryonic state existed, though not occupying all the claimed areas. The Pontian Greeks rebelled against the Ottoman Empire
Ottoman Empire
The Ottoman EmpireIt was usually referred to as the "Ottoman Empire", the "Turkish Empire", the "Ottoman Caliphate" or more commonly "Turkey" by its contemporaries...
during the First World War, under the leadership of Chrysanthus
Archbishop Chrysanthus of Athens
Archbishop Chrysanthus of Athens , born Charilaos Filippidis , was the Archbishop of Athens and all Greece between 1938 and 1941He was born in 1881 in Gratini, Thrace, then part of the Ottoman Empire...
, Metropolitan of Trebizond. In 1917 Greece
Greece
Greece , officially the Hellenic Republic , and historically Hellas or the Republic of Greece in English, is a country in southeastern Europe....
and the Entente
Triple Entente
The Triple Entente was the name given to the alliance among Britain, France and Russia after the signing of the Anglo-Russian Entente in 1907....
powers considered the creation of a Hellenic
Greeks
The Greeks, also known as the Hellenes , are a nation and ethnic group native to Greece, Cyprus and neighboring regions. They also form a significant diaspora, with Greek communities established around the world....
autonomous state in Pontus, most likely as part of a Ponto-Armenian Federation. In 1919 on the fringes of the Paris Peace Conference
Paris Peace Conference, 1919
The Paris Peace Conference was the meeting of the Allied victors following the end of World War I to set the peace terms for the defeated Central Powers following the armistices of 1918. It took place in Paris in 1919 and involved diplomats from more than 32 countries and nationalities...
Chrysanthos proposed the establishment of a fully independent Republic of Pontus, but neither Greece nor the other delegations supported it.

As Anglo-Hellenic designs on Turkey unfolded, American and French officials reported certain schemes. Early in 1920, an agreement was signed to establish a Ponto-Armenian Federation. At the same time the Greeks had come to an understanding with the British for the establishment of an Anglo-Hellenic army, just in case the Armenians went over to an anti-British power. The British had no documentation of such plans, only the Greeks. The document for plans to land Greek troops in Transcaucasia was written by a M. Manousso, president of the Greek National Council in Armenia, and was brought to the Paris Conference.

Many of Greeks of Trebizond
Trabzon
Trabzon is a city on the Black Sea coast of north-eastern Turkey and the capital of Trabzon Province. Trabzon, located on the historical Silk Road, became a melting pot of religions, languages and culture for centuries and a trade gateway to Iran in the southeast and the Caucasus to the northeast...
and Kerasunta
Giresun
Giresun is the provincial capital of Giresun Province in the Black Sea Region of northeastern Turkey, about west of the city of Trabzon.-Etymology:...
didn't join Samsun
Samsun
Samsun is a city of about half a million people on the north coast of Turkey. It is the provincial capital of Samsun Province and a major Black Sea port.-Name:...
, Tokat
Tokat
Tokat is the capital city of Tokat Province of Turkey, at the mid Black Sea region of Anatolia. According to the 2009 census, the city of Tokat has a population of 129,879.-History:Tokat was established in the Hittite era....
, Ordu
Ordu
Ordu 'army') is a port city on the Black Sea coast of Turkey, and the capital of Ordu Province. Estimated population c. 2010: 141,341.-Etymology:...
and Amasian
Amasya
- History :Its location in this steep valley makes the city a mountain stronghold, easy to defend, and thus Amasya has had a long and prominent history.-Antiquity:...
Greeks' rebellion army.

After the collapse of the Greek front in Asia Minor during the Greco-Turkish War
Greco-Turkish War (1919-1922)
The Greco–Turkish War of 1919–1922, known as the Western Front of the Turkish War of Independence in Turkey and the Asia Minor Campaign or the Asia Minor Catastrophe in Greece, was a series of military events occurring during the partitioning of the Ottoman Empire after World War I between May...
the plan of a fully independent state in the region collapsed, and the subsequent Greek-Turkish population exchange removed the Pontic Greeks from their homeland and resettled them in Greece (chiefly in Macedonia
Macedonia (Greece)
Macedonia is a geographical and historical region of Greece in Southern Europe. Macedonia is the largest and second most populous Greek region...
). But Muslim Pontians still lives in Pontus
Pontus
Pontus or Pontos is a historical Greek designation for a region on the southern coast of the Black Sea, located in modern-day northeastern Turkey. The name was applied to the coastal region in antiquity by the Greeks who colonized the area, and derived from the Greek name of the Black Sea: Πόντος...
.

The Paris Peace Conference meeting in January 1919, witnessed the formation of pertinent decisions pertaining to the future of the Ottoman Empire .This Conference also witnessed the emergence of new partners, desiring to acquire shares from the Ottoman territories. These new partners did not hesitate to pronounce their desires to the Allies, albeit the clashes in their zones of interest. The surprised Allies, viewing these demands soon noted that regions such as Cilicia, Maraş and the six Eastern provinces as well as Trabzon, demanded by the Armenians, was partially also a matter of interest for the Greeks. The Greek interests laid particularly in the Trabzon region to fulfill their intention of forming a Pontus republic in the Black Sea. Hence, during the discussions of the Paris Peace Conference as Boghos Nubar Pasha claimed to pursue good relations with the Armenians, Venizelos persisted on preserving affirmative contacts with the Greeks.

This research is designed to analytically evaluate through archival documents as well, the January 1920 discussions in Erivan and Tiflis between the Greeks and Armenians for a possible confederation, attempted following the failure of the search of the Chrysanthus
Archbishop Chrysanthus of Athens
Archbishop Chrysanthus of Athens , born Charilaos Filippidis , was the Archbishop of Athens and all Greece between 1938 and 1941He was born in 1881 in Gratini, Thrace, then part of the Ottoman Empire...
, pursued in Europe with the anticipation of finding support for the foundation of an independent Pontus state.