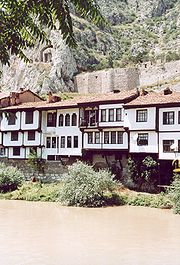 Its location in this steep valley makes the city a mountain stronghold, easy to defend, and thus Amasya has had a long and prominent history.

Archaeological research shows that Amasya was first settled in 5500 BC by the Hittites
Hittites
The Hittites were a Bronze Age people of Anatolia.They established a kingdom centered at Hattusa in north-central Anatolia c. the 18th century BC. The Hittite empire reached its height c...
and subsequently by Phrygians, Cimmerians
Cimmerians
The Cimmerians or Kimmerians were ancient equestrian nomads of Indo-European origin.According to the Greek historian Herodotus, of the 5th century BC, the Cimmerians inhabited the region north of the Caucasus and the Black Sea during the 8th and 7th centuries BC, in what is now Ukraine and Russia...
, Lydians
Lydians
The Lydians were the inhabitants of Lydia, a region in western Anatolia, who spoke the distinctive Lydian language, an Indo-European language of the Anatolian group....
, Persians
Persian people
The Persian people are part of the Iranian peoples who speak the modern Persian language and closely akin Iranian dialects and languages. The origin of the ethnic Iranian/Persian peoples are traced to the Ancient Iranian peoples, who were part of the ancient Indo-Iranians and themselves part of...
, Armenians
Armenians
Armenian people or Armenians are a nation and ethnic group native to the Armenian Highland.The largest concentration is in Armenia having a nearly-homogeneous population with 97.9% or 3,145,354 being ethnic Armenian....
.

By 183 BC the city was settled by Hellenistic people, eventually becoming the capital of the kings of Pontus
Pontus
Pontus or Pontos is a historical Greek designation for a region on the southern coast of the Black Sea, located in modern-day northeastern Turkey. The name was applied to the coastal region in antiquity by the Greeks who colonized the area, and derived from the Greek name of the Black Sea: Πόντος...
from 333 BC to 26 BC. Today there are prominent ruins including the royal tombs of Pontus in the rocks above the riverbank in the centre of the city.

Amaseia was captured by the Roman
Ancient Rome
Ancient Rome was a thriving civilization that grew on the Italian Peninsula as early as the 8th century BC. Located along the Mediterranean Sea and centered on the city of Rome, it expanded to one of the largest empires in the ancient world....
Lucullus
Lucullus
Lucius Licinius Lucullus , was an optimate politician of the late Roman Republic, closely connected with Sulla Felix...
in 70 BC from Armenia
Armenia
Armenia , officially the Republic of Armenia , is a landlocked mountainous country in the Caucasus region of Eurasia...
and was quickly made a free city and administrative center of his new province of Bithynia
Bithynia
Bithynia was an ancient region, kingdom and Roman province in the northwest of Asia Minor, adjoining the Propontis, the Thracian Bosporus and the Euxine .-Description:...
and Pontus
Pontus
Pontus or Pontos is a historical Greek designation for a region on the southern coast of the Black Sea, located in modern-day northeastern Turkey. The name was applied to the coastal region in antiquity by the Greeks who colonized the area, and derived from the Greek name of the Black Sea: Πόντος...
by Pompey
Pompey
Gnaeus Pompeius Magnus, also known as Pompey or Pompey the Great , was a military and political leader of the late Roman Republic...
. By this time Amaseia was a thriving city, the home of thinkers, writers and poets, and one of them, Strabo
Strabo
Strabo, also written Strabon was a Greek historian, geographer and philosopher.-Life:Strabo was born to an affluent family from Amaseia in Pontus , a city which he said was situated the approximate equivalent of 75 km from the Black Sea...
, left a full description of Amaseia as it was between 60 BC and 19 AD. Around 2 or 3 BC
3 BC
Year 3 BC was a common year starting on Wednesday or Thursday of the Julian calendar and a common year starting on Tuesday of the Proleptic Julian calendar...
, it was incorporated into the Roman province of Galatia
Galatia (Roman province)
Galatia was the name of a province of the Roman Empire in Anatolia . It was established by the first emperor, Augustus , in 25 BC, covering most of formerly independent Celtic Galatia, with its capital at Ancyra....
, in the district of Pontus Galaticus. Around the year 112, the emperor Trajan
Trajan
Trajan , was Roman Emperor from 98 to 117 AD. Born into a non-patrician family in the province of Hispania Baetica, in Spain Trajan rose to prominence during the reign of emperor Domitian. Serving as a legatus legionis in Hispania Tarraconensis, in Spain, in 89 Trajan supported the emperor against...
designated it a part of the province of Cappadocia
Cappadocia
Cappadocia is a historical region in Central Anatolia, largely in Nevşehir Province.In the time of Herodotus, the Cappadocians were reported as occupying the whole region from Mount Taurus to the vicinity of the Euxine...
. Later in the 2nd century it gained the titles 'metropolis
Metropolis
A metropolis is a very large city or urban area which is a significant economic, political and cultural center for a country or region, and an important hub for regional or international connections and communications...
' and 'first city'. After the division of the Roman Empire
Roman Empire
The Roman Empire was the post-Republican period of the ancient Roman civilization, characterised by an autocratic form of government and large territorial holdings in Europe and around the Mediterranean....
by emperor Diocletian
Diocletian
Diocletian |latinized]] upon his accession to Diocletian . c. 22 December 244  – 3 December 311), was a Roman Emperor from 284 to 305....
the city became part of the East Roman Empire (the Byzantine Empire
Byzantine Empire
The Byzantine Empire was the Eastern Roman Empire during the periods of Late Antiquity and the Middle Ages, centred on the capital of Constantinople. Known simply as the Roman Empire or Romania to its inhabitants and neighbours, the Empire was the direct continuation of the Ancient Roman State...
). At this time it had a predominantly Greek-speaking population.

In 1075 following 700 years of Byzantine rule Amasya was conquered by the Turkmen
Oghuz Turks
The Turkomen also known as Oghuz Turks were a historical Turkic tribal confederation in Central Asia during the early medieval Turkic expansion....
Danishmend emirs. It became their capital until it was annexed by the Seljuk ruler Kiliç Arslan II. Under the Seljuks and the Ilkhan the city became a centre of Islamic culture. Schools, mosques, tombs and other architecture of this period still remain.

After being incorporated into the Ottoman Empire
Ottoman Empire
The Ottoman EmpireIt was usually referred to as the "Ottoman Empire", the "Turkish Empire", the "Ottoman Caliphate" or more commonly "Turkey" by its contemporaries...
under Sultan Bayezid I
Bayezid I
Bayezid I was the Sultan of the Ottoman Empire, from 1389 to 1402. He was the son of Murad I and Valide Sultan Gülçiçek Hatun.-Biography:Bayezid was born in Edirne and spent his youth in Bursa, where he received a high-level education...
Amasya grew in importance as a centre of learning; the children of the Ottoman rulers being sent here for their education. As part of their preparation for future rule they were given the position and responsibility of governor of Amasya. Future sultans from Beyazid I in the late 14th century through to Murat III in the 16th were schooled here and held the position of governor in their youth.


The Turkish War of Independence

In 1919 Amasya was the location of the final planning meetings held by Mustafa Kemal Atatürk for the building of a Turkish army to establish the Turkish republic following the collapse of the Ottoman Empire at the end of the First World War. It was here that Mustafa Kemal made the announcement of the Turkish War of Independence
Turkish War of Independence
The Turkish War of Independence was a war of independence waged by Turkish nationalists against the Allies, after the country was partitioned by the Allies following the Ottoman Empire's defeat in World War I...
in the Amasya Circular
Amasya Circular
Amasya Circular was a joint circular issued on 22 June 1919 in Amasya by Fahri Yaver-i Hazret-i Şehriyari Mirliva Mustafa Kemal Pasha , Hüseyin Rauf Bey , Miralay Refet Bey and Mirliva Ali Fuad Pasha...
.


The Republic of Turkey

The Greeks of Amasya were replaced by Turks from Greece in the population exchange at the founding of the Turkish Republic.

The province of Amasya is known for producing high-quality, small but well-flavoured apples. Other crops include tobacco and poppy seed
Poppy seed
Poppy seed is an oilseed obtained from the opium poppy . The tiny kidney-shaped seeds have been harvested from dried seed pods by various civilizations for thousands of years...
s. Other economic activities in the region include mining, textiles and cement manufacture, but Amasya is not a very wealthy city. It is however an attractive, well-preserved town, especially when sitting by the river, which has a particular mystique on a winter evening when fog fılls the valley. Tourists (and also soldiers from the local base) contribute valuable income to the shopkeepers of the city. The railway line from Sivas to Samsun
Samsun
Samsun is a city of about half a million people on the north coast of Turkey. It is the provincial capital of Samsun Province and a major Black Sea port.-Name:...
runs through Amasya, and there is an attractive Ottoman period railway station.

There is some nightlife, mainly bars and cafes for students, and some basic restaurants. The cuisine includes the local specialty toyga çorbası, a soup containing yoghurt, drunk hot or cold. Other delights include pastries with poppy seeds and tea by the riverbank.


The legend of Ferhat and Şirin

In its Turkish version, this classic tale of oriental folklore is held to have taken place in Amasya. The nearby mountain Ferhat is named for Farhad
Farhad
Farhad is a Persian name meaning elation or happiness, and may refer to:*Farhad or Phraates, the name of 5 kings in the Arsacid Empire**Phraates I of Parthia**Phraates II of Parthia**Phraates III of Parthia**Phraates IV of Parthia...
(Turkish spelling Ferhat), the hero of the legend, who for love of the princess Shirin
Shirin
Shirin was a wife of the Sassanid Persian Shahanshah , Khosrau II. In the revolution after the death of Khosrau's father Hormizd IV, the General Bahram Chobin took power over the Persian empire. Shirin fled with Khosrau to Syria where they lived under the protection of Byzantine emperor Maurice...
(Turkish spelling Şirin) tried to win her father's favour and permission by tunnelling through the mountain to bring spring water to his palace. Sadly, while he was working he was sent the false information that Shirin had died; upon which he threw himself onto the rocks in his grief. And his beloved princess died soon after.
The story has since become a play by Nazim Hikmet
Nazim Hikmet
Nâzım Hikmet Ran , commonly known as Nâzım Hikmet , was a Turkish poet, playwright, novelist and memoirist. He was acclaimed for the "lyrical flow of his statements"...
, a novel by Talip Apaydın, and an opera by Arif Melikov.