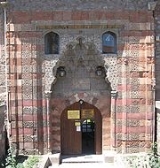 Encyclopedia
Tokat is the capital city of Tokat Province
Tokat Province
Tokat Province is a province in northern Turkey. Its adjacent provinces are Amasya to the northwest, Yozgat to the southwest, Sivas to the southeast, and Ordu to the northeast...
of Turkey
Turkey
Turkey , known officially as the Republic of Turkey , is a Eurasian country located in Western Asia and in East Thrace in Southeastern Europe...
, at the mid Black Sea
Black Sea
The Black Sea is bounded by Europe, Anatolia and the Caucasus and is ultimately connected to the Atlantic Ocean via the Mediterranean and the Aegean seas and various straits. The Bosphorus strait connects it to the Sea of Marmara, and the strait of the Dardanelles connects that sea to the Aegean...
region of Anatolia
Anatolia
Anatolia is a geographic and historical term denoting the westernmost protrusion of Asia, comprising the majority of the Republic of Turkey...
. According to the 2009 census, the city of Tokat has a population of 129,879.

Tokat (Greek Ευδοκία) was established in the Hittite
Hittites
The Hittites were a Bronze Age people of Anatolia.They established a kingdom centered at Hattusa in north-central Anatolia c. the 18th century BC. The Hittite empire reached its height c...
era.
During the time of king Mithradates VI of Pontus, it was one of his many strongholds in Asia Minor
Asia Minor
Asia Minor is a geographical location at the westernmost protrusion of Asia, also called Anatolia, and corresponds to the western two thirds of the Asian part of Turkey...
.
The name from which the modern town derives, Ευδοκία, implies an ecclesiastical foundation during the Byzantine
Byzantine Empire
The Byzantine Empire was the Eastern Roman Empire during the periods of Late Antiquity and the Middle Ages, centred on the capital of Constantinople. Known simply as the Roman Empire or Romania to its inhabitants and neighbours, the Empire was the direct continuation of the Ancient Roman State...
era.

After the Battle of Manzikert
Battle of Manzikert
The Battle of Manzikert , was fought between the Byzantine Empire and Seljuq Turks led by Alp Arslan on August 26, 1071 near Manzikert...
the town, like most of Asia Minor, came under the control of the Seljuq Turks. However, after the death of Sultan Suleiman ibn Qutulmish  in 1086 the Emir Danishmend Gazi
Danishmend Gazi
Danishmend Gazi, full name Gümüştekin Danishmend Ahmed Gazi or Danishmend Taylu , was the founder of the Beylik of Danishmends...
took control of the area, operating from his power base in the town of Sivas.
It would be many decades before the Seljuks took control of that region, in the reign of Kilij Arslan II
Kilij Arslan II
Kilij Arslan II was a Seljuk Sultan of Rûm from 1156 until his death in 1192.As Arnold of Lübeck reports in his Chronica Slavorum, he was present at the meeting of Henry the Lion with Kilij-Arslan during the former's pilgrimage to Jerusalem in 1172...
.

After the battle of Battle of Köse Dağ
Battle of Köse Dag
The Battle of Köse Dağ was fought between the Seljuk Turks of Anatolia and the Mongols on June 26, 1243 at the defile of Köse Dağ, a location between Erzincan and Gümüşhane in northeast Anatolia, modern Turkey, and ended in a decisive Mongol victory....
the Seljuqs hold over the region was lost, and local Emirs such as the Eretna took power until the rise of the Ottomans. 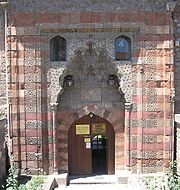 The most important landmark is the Ottoman Citadel, with 28 towers, founded on a rocky hill overlooking the town. Other sights include the Garipler Mosque dating to the 12th century and the Ali Paşa Mosque (16th century) and the Gök Medrese (Pervane Bey Darussifasi), which was constructed in 1270. It was founded as a school of theology
Theology
Theology is the systematic and rational study of religion and its influences and of the nature of religious truths, or the learned profession acquired by completing specialized training in religious studies, usually at a university or school of divinity or seminary.-Definition:Augustine of Hippo...
, and is now converted into a museum, housing archaeological finds from the area.

The Latifoglu Konak, a late 18th century Ottoman residence, is an example Baroque architecture
Baroque architecture
Baroque architecture is a term used to describe the building style of the Baroque era, begun in late sixteenth century Italy, that took the Roman vocabulary of Renaissance architecture and used it in a new rhetorical and theatrical fashion, often to express the triumph of the Catholic Church and...
. The two-story building has been restored and converted into a small museum. Much of the furniture in the kitchen, study, visitors' rooms with bath and toilet, bedroom, master's room and harem
Harem
Harem refers to the sphere of women in what is usually a polygynous household and their enclosed quarters which are forbidden to men...
is original.

Foods distinctive to Tokat include Tokat Kebabi and Zile pekmezi, the latter of which is served in a wooden pot. Zile pekmezi is made from grapes after a special treatment.