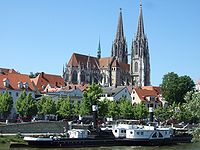 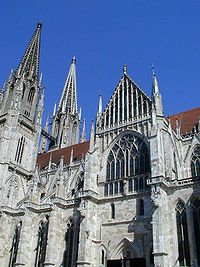 The Regensburg Cathedral , dedicated to St Peter, is the most important church and landmark of the city Regensburg
Regensburg
Regensburg is a city in Bavaria, Germany, located at the confluence of the Danube and Regen rivers, at the northernmost bend in the Danube. To the east lies the Bavarian Forest. Regensburg is the capital of the Bavarian administrative region Upper Palatinate...
, Germany. It is the seat of the Catholic diocese of Regensburg
Diocese of Regensburg
The Diocese of Regensburg is a Roman Catholic ecclesiastical territory seated in Regensburg, Germany. Its district covers parts of northeastern Bavaria; it is subordinate to the archbishop of Munich and Freising. The diocese has 1.3 million Catholics, constituting 81% of its population...
. The church is the prime example of Gothic architecture
Gothic architecture
Gothic architecture is a style of architecture that flourished during the high and late medieval period. It evolved from Romanesque architecture and was succeeded by Renaissance architecture....
in southern Germany
Southern Germany
The term Southern Germany is used to describe a region in the south of Germany. There is no specific boundary to the region, but it usually includes all of Bavaria and Baden-Württemberg, and the southern part of Hesse...
.

A first bishop's church was built around 700, at the site of the present-day cathedral parish church Niedermünster (St. Erhard's tomb). Around 739, St. Boniface chose the area of the Porta Praetoria (North Gate of the old Roman fort) for the bishop's seat, and the site of the cathedral has remained there since. The Cathedral was rebuilt in Carolingian times and expanded in the early 11th century , with an approximately 15-meter-wide transept, two towers and an atrium.

In 1156-1172 the edifice burnt twice, and was also rebuilt starting from 1273 in High Gothic style. The three choirs of the new cathedral were ready for use in 1320, while the old cathedral was demolished at the same time. In 1385-1415 the elaborate main entrance to the west was completed, with the most of the new edifice being finished around 1520; the cloister was constructed in 1514-1538.

The cupola at the transept crossing and other sectors were renovated in Baroque style in the 17th century. In 1828-1841 the cathedral underwent a neo/Gothic restoration commissioned by King Ludwig I of Bavaria
Ludwig I of Bavaria
Ludwig I was a German king of Bavaria from 1825 until the 1848 revolutions in the German states.-Crown prince:...
. The Baroque frescoes were relocated and the cupola demolished, being replaced by a quadripartite rib vault. The towers and their spires were built in 1859-1869. Three years later the cathedral was finally finished, with the completion of the transept gable and the spire (at the crossing), after some 600 years of construction.

The state-run Dombauhütte (Cathedral building workshop) was founded in 1923, for the ongoing oversight, maintenance, and restoration of the cathedral. In the 1980s construction of the crypt mausoleum and archeological exploration of the center nave (partial exposure of a former southern arcade entrance to the atrium of a precursor Roman structure) were carried on.

The cathedral was restored during the 2000s.

An unusual feature of Regensburg Cathedral is its separation from the structure of the older cloister
Cloister
A cloister is a rectangular open space surrounded by covered walks or open galleries, with open arcades on the inner side, running along the walls of buildings and forming a quadrangle or garth...
. This separation came about when the church was rebuilt and displaced to the southwest of the earlier Romanesque cathedral.

In testimony of that Romanesque
Romanesque architecture
Romanesque architecture is an architectural style of Medieval Europe characterised by semi-circular arches. There is no consensus for the beginning date of the Romanesque architecture, with proposals ranging from the 6th to the 10th century. It developed in the 12th century into the Gothic style,...
precursor, the Eselsturm tower still stands on the north side of the cathedral; it was used in the past and is still used to transport construction materials to the upper levels. A pulley remains in the west loft, and with it materials were lifted through an opening in the ceiling near the west portal. To the east of the cathedral is the state-run Dombauhütte (cathedral building workshop) which is responsible for the preservation of the structure. In contrast with many cathedral building works, neither modern machines nor exclusively old tools are used. Rather, tools are manufactured in the workshop itself.

The Erminold Maria is one element of an Annunciation group in the Regensburg Cathedral. It goes back to the so-called Erminoldmeister, who carved and colorfully painted the figure of Mary and the famous laughing figure of the angel Gabriel
Gabriel
In Abrahamic religions, Gabriel is an Archangel who typically serves as a messenger to humans from God.He first appears in the Book of Daniel, delivering explanations of Daniel's visions. In the Gospel of Luke Gabriel foretells the births of both John the Baptist and of Jesus...
about 1280. The figures are juxtaposed to one another on the two western pillars at the crossing of the nave. Mary's right hand is slightly raised toward the angel in greeting. In her left hand she holds a book, into which she is pointing with her index finger.

On the eastern pillars at the crossing are stone figures of Saints Peter and Paul, which were installed in 1320 and 1360-1370 respectively.

On the exterior there is a Judensau
Judensau
Judensau is an image of Jews in obscene contact with a large sow , which in Judaism is an unclean animal, that appeared during the 13th century in Germany and some other European countries; its popularity lasted for over 600 years.-Background and images:The Jewish prohibition of pork comes from...
(Jews' sow) in the form of a sow and three Jews
Jews
The Jews , also known as the Jewish people, are a nation and ethnoreligious group originating in the Israelites or Hebrews of the Ancient Near East. The Jewish ethnicity, nationality, and religion are strongly interrelated, as Judaism is the traditional faith of the Jewish nation...
hanging onto its teats. The Judensau faces in the direction of the former Jewish quarter at the Neupfarrplatz. In 2005 there was a controversy about the posting of an informational sign.

The All Saints' Chapel in the cathedral cloister was built in 1164 as a burial chapel for Bishop
Bishop
A bishop is an ordained or consecrated member of the Christian clergy who is generally entrusted with a position of authority and oversight. Within the Catholic Church, Eastern Orthodox, Oriental Orthodox Churches, in the Assyrian Church of the East, in the Independent Catholic Churches, and in the...
Hartwig II by master builders from Como
Como
Como is a city and comune in Lombardy, Italy.It is the administrative capital of the Province of Como....
, in northern Italy
Northern Italy
Northern Italy is a wide cultural, historical and geographical definition, without any administrative usage, used to indicate the northern part of the Italian state, also referred as Settentrione or Alta Italia...
. Its interior consists of a more finely articulated triconchos with frescoes from the time of its construction.

Most of the valuable stained glass windows were installed between 1220-1230 and 1320-1370. The windows of the west facade were only completed in the 19th century. In 1967-1968 came the windows of the left chancel, from the hand of the artist Professor Oberberger. He also produced the Pentecost window in the west of the north transept and the clerestory
Clerestory
Clerestory is an architectural term that historically denoted an upper level of a Roman basilica or of the nave of a Romanesque or Gothic church, the walls of which rise above the rooflines of the lower aisles and are pierced with windows. In modern usage, clerestory refers to any high windows...
windows in Gothic style.

The silver high altar stems from Augsburg artists and was built in the period between 1695 and 1785. A particular feature is the five Gothic altars of reservation. In the south choir a new altar of celebration was built in 2004, the work of Helmut Langhammer.

St. Peter Canisius
Petrus Canisius
Saint Petrus Canisius was an important Jesuit who fought against the spread of Protestantism in Germany, Austria, Bohemia, Moravia, , and Switzerland...
preached from the stone pulpit in the central nave in 1556-1557.

The Cathedral is also the burial place of important bishops, including Johann Michael von Sailer (1829-1832, memorial built by Konrad Eberhard
Konrad Eberhard
Konrad Eberhard, a German historical painter, better known as a sculptor, was one of the foremost artists of the so-called Nazarene School, which at one time gathered round Friedrich Overbeck in Rome. He was born on November 25, 1768 at Hindelang in Algau, where his father nand ul grandfather were...
in the south chancel), Georg Michael Wittmann (1832-1833, memorial also by Konrad Eberhard in the north chancel), and Archbishop Michael Buchberger
Michael Buchberger
Michael Buchberger was a Roman Catholic priest, notable as the seventy-fourth bishop of Regensburg since the diocese's foundation in 739.- Life :...
(1927-1961, likewise in the north chancel). In the western part of the central nave stands a bronze memorial for the Prince-Bishop Cardinal Philipp Wilhelm (d. 1598), the brother of Duke Maximilian I of Bavaria
Maximilian I, Elector of Bavaria
Maximilian I, Duke/Elector of Bavaria , called "the Great", was a Wittelsbach ruler of Bavaria and a prince-elector of the Holy Roman Empire. His reign was marked by the Thirty Years' War ....
.