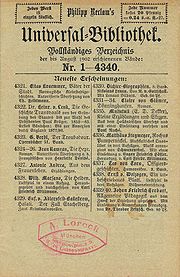 Reclam Verlag or just Reclam is a German
Germany
Germany , officially the Federal Republic of Germany , is a federal parliamentary republic in Europe. The country consists of 16 states while the capital and largest city is Berlin. Germany covers an area of 357,021 km2 and has a largely temperate seasonal climate...
publishing house, established in Leipzig
Leipzig
Leipzig Leipzig has always been a trade city, situated during the time of the Holy Roman Empire at the intersection of the Via Regia and Via Imperii, two important trade routes. At one time, Leipzig was one of the major European centres of learning and culture in fields such as music and publishing...
in 1828 by Anton Philipp Reclam
Anton Philipp Reclam
Anton Philipp Reclam was a German publisher and founder of the Reclam publishing house. Reclam established his publishing house in Leipzig in 1828 as 'Philipp Reclam jun.' to distinguish it from his father's own company...
. It is known for its "little yellow books", in particular those of its "universal library" (Universal-Bibliothek).

In 1912 it became the first company to introduce book vending machine
Vending machine
A vending machine is a machine which dispenses items such as snacks, beverages, alcohol, cigarettes, lottery tickets, consumer products and even gold and gems to customers automatically, after the customer inserts currency or credit into the machine....
s to Germany
German Empire
The German Empire refers to Germany during the "Second Reich" period from the unification of Germany and proclamation of Wilhelm I as German Emperor on 18 January 1871, to 1918, when it became a federal republic after defeat in World War I and the abdication of the Emperor, Wilhelm II.The German...
.

During Nazi rule in Germany
Nazi Germany
Nazi Germany , also known as the Third Reich , but officially called German Reich from 1933 to 1943 and Greater German Reich from 26 June 1943 onward, is the name commonly used to refer to the state of Germany from 1933 to 1945, when it was a totalitarian dictatorship ruled by...
, Reclam was forbidden to publish books by some authors, and particularly by Jewish
Jews
The Jews , also known as the Jewish people, are a nation and ethnoreligious group originating in the Israelites or Hebrews of the Ancient Near East. The Jewish ethnicity, nationality, and religion are strongly interrelated, as Judaism is the traditional faith of the Jewish nation...
authors. In an allied bombing raid
Bombing of Leipzig in World War II
During World War II, Leipzig was repeatedly attacked by British as well as American air raids. The most severe attack was launched by the Royal Air Force in the early hours of December 4, 1943 and claimed more than 1,800 lives...
on Leipzig in World War II
World War II
World War II, or the Second World War , was a global conflict lasting from 1939 to 1945, involving most of the world's nations—including all of the great powers—eventually forming two opposing military alliances: the Allies and the Axis...
on December 4, 1943, 450 tons of books were destroyed.

After the partition of Germany
Potsdam Conference
The Potsdam Conference was held at Cecilienhof, the home of Crown Prince Wilhelm Hohenzollern, in Potsdam, occupied Germany, from 16 July to 2 August 1945. Participants were the Soviet Union, the United Kingdom, and the United States...
in the aftermath of the war, the house was divided after the owner was partly dispossessed in the Soviet occupation zone and in September of 1947 the main office was moved to Stuttgart
Stuttgart
Stuttgart is the capital of the state of Baden-Württemberg in southern Germany. The sixth-largest city in Germany, Stuttgart has a population of 600,038 while the metropolitan area has a population of 5.3 million ....
, (then American occupation zone, later West Germany
West Germany
West Germany is the common English, but not official, name for the Federal Republic of Germany or FRG in the period between its creation in May 1949 to German reunification on 3 October 1990....
). Since 1980, the house's head office has been in nearby Ditzingen
Ditzingen
Ditzingen is a town in the district of Ludwigsburg, Baden-Württemberg, Germany. It is situated about 10 km northwest of Stuttgart, and 12 km southwest of Ludwigsburg. The Hirschlanden transmitter is located near Ditzingen-Hirschlanden...
. The original parent house in Leipzig remained there, but was nationalized
Nationalization
Nationalisation, also spelled nationalization, is the process of taking an industry or assets into government ownership by a national government or state. Nationalization usually refers to private assets, but may also mean assets owned by lower levels of government, such as municipalities, being...
by the Communist
Communism
Communism is a social, political and economic ideology that aims at the establishment of a classless, moneyless, revolutionary and stateless socialist society structured upon common ownership of the means of production...
regime of East Germany until German reunification
German reunification
German reunification was the process in 1990 in which the German Democratic Republic joined the Federal Republic of Germany , and when Berlin reunited into a single city, as provided by its then Grundgesetz constitution Article 23. The start of this process is commonly referred by Germans as die...
. Eventually, Leipzig was given up in 2006. The house has always been family property.

The colour code of their Universal-Bibliothek edition is as follows: the (most popular) yellow books contain classic works of the German language
German language
German is a West Germanic language, related to and classified alongside English and Dutch. With an estimated 90 – 98 million native speakers, German is one of the world's major languages and is the most widely-spoken first language in the European Union....
, classics in their original foreign language (with lexical and vocabulary help) are red (in English
English language
English is a West Germanic language that arose in the Anglo-Saxon kingdoms of England and spread into what was to become south-east Scotland under the influence of the Anglian medieval kingdom of Northumbria...
, French
French language
French is a Romance language spoken as a first language in France, the Romandy region in Switzerland, Wallonia and Brussels in Belgium, Monaco, the regions of Quebec and Acadia in Canada, and by various communities elsewhere. Second-language speakers of French are distributed throughout many parts...
, Spanish
Spanish language
Spanish , also known as Castilian , is a Romance language in the Ibero-Romance group that evolved from several languages and dialects in central-northern Iberia around the 9th century and gradually spread with the expansion of the Kingdom of Castile into central and southern Iberia during the...
and Italian
Italian language
Italian is a Romance language spoken mainly in Europe: Italy, Switzerland, San Marino, Vatican City, by minorities in Malta, Monaco, Croatia, Slovenia, France, Libya, Eritrea, and Somalia, and by immigrant communities in the Americas and Australia...
), bi-lingual
Multilingualism
Multilingualism is the act of using, or promoting the use of, multiple languages, either by an individual speaker or by a community of speakers. Multilingual speakers outnumber monolingual speakers in the world's population. Multilingualism is becoming a social phenomenon governed by the needs of...
books (German and the original language) are in orange, blue is the colour for study guides, green for original historical sources with explanations, and magenta
Magenta
Magenta is a color evoked by light stronger in blue and red wavelengths than in yellowish-green wavelengths . In light experiments, magenta can be produced by removing the lime-green wavelengths from white light...
for non-fiction: politics, history, society, natural sciences, art, music or religion.

The popularity of the publishing house, especially the Universal-Bibliothek, is largely due to its particularly inexpensive prices. Thus they are fairly widespread all over the German-speaking countries.
The source of this article is wikipedia, the free encyclopedia.  The text of this article is licensed under the GFDL.