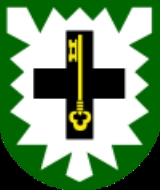 In medieval times the area around Recklinghausen was the Vest Recklinghausen, a territory which belonged to Electorate of Cologne. From 1446 to 1576 it was rented to the lords of Gemen (now part of the city Borken
Borken, North Rhine-Westphalia
-Neighbouring places:* Raesfeld* Heiden* Südlohn* Rhede* Velen-Division of the town:Borken consists of 12 districts:-History:The name comes from the German word "Burg" or "Burk" and gradually changed to "Burke", then "Burken" and finally to "Borken". Around the year 800 the village was being used...
) and Schaumburg-Lippe
Schaumburg-Lippe
Schaumburg-Lippe was until 1946 a small state in Germany, located in the present day state of Lower Saxony, with its capital at Bückeburg.- History :...
. In 1811 it was added to the Grand Duchy of Berg
Grand Duchy of Berg
The Grand Duchy of Berg was established by Napoleon Bonaparte after his victory at the 1805 Battle of Austerlitz on territories between the French Empire at the Rhine river and the Kingdom of Westphalia.-History:...
, and in 1815 became part of the Prussia
Prussia
Prussia was a German kingdom and historic state originating out of the Duchy of Prussia and the Margraviate of Brandenburg. For centuries, the House of Hohenzollern ruled Prussia, successfully expanding its size by way of an unusually well-organized and effective army. Prussia shaped the history...
n Province of Westphalia
Province of Westphalia
The Province of Westphalia was a province of the Kingdom of Prussia and the Free State of Prussia from 1815 to 1946.-History:Napoleon Bonaparte founded the Kingdom of Westphalia, which was a client state of the First French Empire from 1807 to 1813...
.

The district was created in 1816, and after several changes it got its present borders with the last reorganizations of 1975-76.

The district Recklinghausen is located at the north end of the Ruhr area
Ruhr Area
The Ruhr, by German-speaking geographers and historians more accurately called Ruhr district or Ruhr region , is an urban area in North Rhine-Westphalia, Germany. With 4435 km² and a population of some 5.2 million , it is the largest urban agglomeration in Germany...
where it changes from the urban parts into the rural Münsterland. The main river in the district is the Lippe River
Lippe River
The Lippe is a river in North Rhine-Westphalia, Germany. It is a right tributary of the Rhine and in length.The source is located at the edge of the Teutoburg Forest in Bad Lippspringe close to the city of Paderborn. It runs westward through Paderborn, Lippstadt and then along the northern edge...
.