First mentioned in 1017 as Ricoldinchuson, in 1150 the city was the center of the surrounding Vest Recklinghausen
Vest Recklinghausen
Vest Recklinghausen was an ecclesiastical territory in the Holy Roman Empire, located in the center of today's North Rhine-Westphalia. The rivers Emscher and Lippe formed the border with the County of Mark and Essen Abbey in the south , and to the Bishopric of Münster in the north...
. In 1236, the city of Recklinghausen received town privileges
Town privileges
Town privileges or city rights were important features of European towns during most of the second millennium.Judicially, a town was distinguished from the surrounding land by means of a charter from the ruling monarch that defined its privileges and laws. Common privileges were related to trading...
. As part of the County of Vest, ownership of Recklinghausen changed several times in the 15th and 16th century, and in 1576, the entire county was pawned to the Elector of Cologne. In 1582-83, again in 1586, and again in 1587, the city was plundered by partisan armies during the Cologne War
Cologne War
The Cologne War devastated the Electorate of Cologne, a historical ecclesiastical principality of the Holy Roman Empire, present-day North-Rhine-Westphalia, in Germany...
, a feud over religious parity in Electorate of Cologne and electoral influence in the Holy Roman Empire.

Recklinghausen was also the site of more than 100 witchcraft trials
Witch-hunt
A witch-hunt is a search for witches or evidence of witchcraft, often involving moral panic, mass hysteria and lynching, but in historical instances also legally sanctioned and involving official witchcraft trials...
(1514–1710). The trial activity reached a climax twice: In the time period of 1580/81 and again in 1588/89. The last person to be convicted of witchcraft
Witchcraft
Witchcraft, in historical, anthropological, religious, and mythological contexts, is the alleged use of supernatural or magical powers. A witch is a practitioner of witchcraft...
was Anna Spickermann; after spending 16 months in prison, she was sentenced to death by sword and burned afterward.

Recklinghausen is home to a museum of icons, which includes more than 1,000 Orthodox
Eastern Orthodox Church
The Orthodox Church, officially called the Orthodox Catholic Church and commonly referred to as the Eastern Orthodox Church, is the second largest Christian denomination in the world, with an estimated 300 million adherents mainly in the countries of Belarus, Bulgaria, Cyprus, Georgia, Greece,...
works from Russia
Russia
Russia or , officially known as both Russia and the Russian Federation , is a country in northern Eurasia. It is a federal semi-presidential republic, comprising 83 federal subjects...
, Greece
Greece
Greece , officially the Hellenic Republic , and historically Hellas or the Republic of Greece in English, is a country in southeastern Europe....
and the Balkan countries, as well as early Copt
Copt
The Copts are the native Egyptian Christians , a major ethnoreligious group in Egypt....
ic Christian
Christian
A Christian is a person who adheres to Christianity, an Abrahamic, monotheistic religion based on the life and teachings of Jesus of Nazareth as recorded in the Canonical gospels and the letters of the New Testament...
art from Egypt
Egypt
Egypt , officially the Arab Republic of Egypt, Arabic: , is a country mainly in North Africa, with the Sinai Peninsula forming a land bridge in Southwest Asia. Egypt is thus a transcontinental country, and a major power in Africa, the Mediterranean Basin, the Middle East and the Muslim world...
. The icon museum - the largest outside the Orthodox world - was founded in 1956 and reopened after renovation in February 2006 for its 50th anniversary.

In front of the Ruhrfestpielhaus, whose refurbishment in 2001 won the German Architecture Award, there is "Die Liegende Nr 5" a famous sculpture by Henry Moore
Henry Moore
Henry Spencer Moore OM CH FBA was an English sculptor and artist. He was best known for his semi-abstract monumental bronze sculptures which are located around the world as public works of art....
. At the Lohtor in front of a memorial for the victims of World War I, there is a large sculpture made of more than 30,000 bricks by Per Kirkeby
Per Kirkeby
Per Kirkeby is a Danish painter, poet, filmmaker and sculptor.-Biography:1962 Studies at the Experimental Art School in Copenhagen; works in the School on painting, graphic arts, 8 millimeter films and performance pieces...
.

Recklinghausen hosts the annual Ruhrfestspiele
Ruhrfestspiele
Ruhrfestspiele in Recklinghausen, North Rhine-Westphalia, Germany, is one of the oldest Theatre festivals in Europe. Founded after World war II, the festival is an event for the Ruhr district....
, a cultural festival with an international reputation. Every year there is a cultural programme with many national and international theatrical productions starting on 1 May. In 2008 the programme included the play Speed the Plow starring Kevin Spacey
Kevin Spacey
Kevin Spacey, CBE is an American actor, director, screenwriter, producer, and crooner. He grew up in California, and began his career as a stage actor during the 1980s, before being cast in supporting roles in film and television...
and Jeff Goldblum
Jeff Goldblum
Jeffrey Lynn "Jeff" Goldblum is an American actor. His career began in the mid-1970s and he has appeared in major box-office successes including The Fly, Jurassic Park and its sequel Jurassic Park: The Lost World, and Independence Day...
as one of the major productions. The main theatrical stage is the Ruhrfestspielhaus but other theatres in and around Recklinghausen participate.

The two major motorways crossing the area of the city are the A2 and the A43
Bundesautobahn 43
is an autobahn in western Germany, connecting Münster via Recklinghausen to Wuppertal. It is an important bypass for traffic coming from the A 1 wanting to go to the western Ruhr valley and wanting to avoid tailbacks at the Kamener Kreuz near Dortmund....
. The city is connected to the larger waterways by the Rhein-Herne-Kanal. Recklinghausen has two railway stations. The Central Station (Recklinghausen Hauptbahnhof
Recklinghausen Hauptbahnhof
is the Hauptbahnhof for the city of Recklinghausen in Germany.-History:The original station opened in 1870 by the Cologne-Minden Railway Company as part of the construction of the Hamburg-Venlo railway....
) which is connected to the national and European high speed (Intercity
Inter-city rail
Inter-city rail services are express passenger train services that cover longer distances than commuter or regional trains.There is no precise definition of inter-city rail. Its meaning may vary from country to country...
) and the South Station (Recklinghausen Südbahnhof). 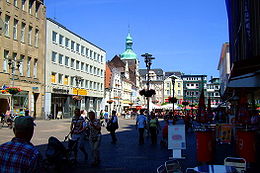 Acre
Acre, Israel
Acre , is a city in the Western Galilee region of northern Israel at the northern extremity of Haifa Bay. Acre is one of the oldest continuously inhabited sites in the country....
(Israel
Israel
The State of Israel is a parliamentary republic located in the Middle East, along the eastern shore of the Mediterranean Sea...
) Bytom
Bytom
Bytom is a city in Silesia in southern Poland, near Katowice. The central-western district of the Upper Silesian Metropolitan Union - metropolis with the population of 2 millions. Bytom is located in the Silesian Highlands, on the Bytomka river .The city belongs to the Silesian Voivodeship since...
(Poland
Poland
Poland , officially the Republic of Poland , is a country in Central Europe bordered by Germany to the west; the Czech Republic and Slovakia to the south; Ukraine, Belarus and Lithuania to the east; and the Baltic Sea and Kaliningrad Oblast, a Russian exclave, to the north...
) Dordrecht
Dordrecht
Dordrecht , colloquially Dordt, historically in English named Dort, is a city and municipality in the western Netherlands, located in the province of South Holland. It is the fourth largest city of the province, having a population of 118,601 in 2009...
(Netherlands
Netherlands
The Netherlands is a constituent country of the Kingdom of the Netherlands, located mainly in North-West Europe and with several islands in the Caribbean. Mainland Netherlands borders the North Sea to the north and west, Belgium to the south, and Germany to the east, and shares maritime borders...
) Douai
Douai
-Main sights:Douai's ornate Gothic style belfry was begun in 1380, on the site of an earlier tower. The 80 m high structure includes an impressive carillon, consisting of 62 bells spanning 5 octaves. The originals, some dating from 1391 were removed in 1917 during World War I by the occupying...
(France
France
The French Republic , The French Republic , The French Republic , (commonly known as France , is a unitary semi-presidential republic in Western Europe with several overseas territories and islands located on other continents and in the Indian, Pacific, and Atlantic oceans. Metropolitan France...
) Preston (England
England
England is a country that is part of the United Kingdom. It shares land borders with Scotland to the north and Wales to the west; the Irish Sea is to the north west, the Celtic Sea to the south west, with the North Sea to the east and the English Channel to the south separating it from continental...
, United Kingdom
United Kingdom
The United Kingdom of Great Britain and Northern IrelandIn the United Kingdom and Dependencies, other languages have been officially recognised as legitimate autochthonous languages under the European Charter for Regional or Minority Languages...
) Schmalkalden
Schmalkalden
- Notable people :*Christoph Cellarius, scholar, born 22 November 1638, died 4 June 1707 in Halle*Christian Karl August Ludwig von Massenbach, colonel, born 16 April 1758, died 21 November 1827 at Białokosz...
(Thuringia
Thuringia
The Free State of Thuringia is a state of Germany, located in the central part of the country.It has an area of and 2.29 million inhabitants, making it the sixth smallest by area and the fifth smallest by population of Germany's sixteen states....
, Germany
Germany
Germany , officially the Federal Republic of Germany , is a federal parliamentary republic in Europe. The country consists of 16 states while the capital and largest city is Berlin. Germany covers an area of 357,021 km2 and has a largely temperate seasonal climate...
)