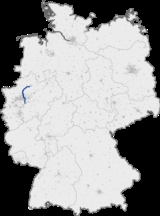 Encyclopedia
is an autobahn in western Germany
Germany
Germany , officially the Federal Republic of Germany , is a federal parliamentary republic in Europe. The country consists of 16 states while the capital and largest city is Berlin. Germany covers an area of 357,021 km2 and has a largely temperate seasonal climate...
, connecting Münster
Münster
Münster is an independent city in North Rhine-Westphalia, Germany. It is located in the northern part of the state and is considered to be the cultural centre of the Westphalia region. It is also capital of the local government region Münsterland...
via Recklinghausen
Recklinghausen
Recklinghausen is the northernmost city in the Ruhr-Area and the capital of the Recklinghausen district. It borders the rural Münsterland and is characterized by large fields and farms in the north and industry in the south...
to Wuppertal
Wuppertal
Wuppertal is a city in North Rhine-Westphalia, Germany. It is located in and around the Wupper river valley, and is situated east of the city of Düsseldorf and south of the Ruhr area. With a population of approximately 350,000, it is the largest city in the Bergisches Land...
. It is an important bypass for traffic coming from the A 1 wanting to go to the western Ruhr valley and wanting to avoid tailbacks at the Kamener Kreuz
Kamener Kreuz
The Kamener Kreuz was formerly a full cloverleaf interchange near Dortmund in North Rhine-Westphalia Germany where the Autobahnen A1 and A2 meet. It lies between the towns of Kamen and Bergkamen in the west and the city of Hamm and the municipality Bönen in the east...
near Dortmund
Dortmund
Dortmund is a city in Germany. It is located in the Bundesland of North Rhine-Westphalia, in the Ruhr area. Its population of 585,045 makes it the 7th largest city in Germany and the 34th largest in the European Union....
.

In the video game Need For Speed Prostreet, this autobahn will be used as a track. It will also be one of the two tracks available in the demo, which is scheduled to be released on the Xbox Live Marketplace on October 22, 2007.
The source of this article is wikipedia, the free encyclopedia.  The text of this article is licensed under the GFDL.