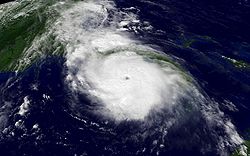 Rapid deepening, also known as rapid intensification, is a meteorological
Meteorology
Meteorology is the interdisciplinary scientific study of the atmosphere. Studies in the field stretch back millennia, though significant progress in meteorology did not occur until the 18th century. The 19th century saw breakthroughs occur after observing networks developed across several countries...
condition that occurs when the minimum sea-level atmospheric pressure
Atmospheric pressure
Atmospheric pressure is the force per unit area exerted into a surface by the weight of air above that surface in the atmosphere of Earth . In most circumstances atmospheric pressure is closely approximated by the hydrostatic pressure caused by the weight of air above the measurement point...
of a tropical cyclone
Tropical cyclone
A tropical cyclone is a storm system characterized by a large low-pressure center and numerous thunderstorms that produce strong winds and heavy rain. Tropical cyclones strengthen when water evaporated from the ocean is released as the saturated air rises, resulting in condensation of water vapor...
decreases drastically in a short period of time. The National Weather Service
National Weather Service
The National Weather Service , once known as the Weather Bureau, is one of the six scientific agencies that make up the National Oceanic and Atmospheric Administration of the United States government...
describes rapid deepening as a decrease of 42 millibars
Bar (unit)
The bar is a unit of pressure equal to 100 kilopascals, and roughly equal to the atmospheric pressure on Earth at sea level. Other units derived from the bar are the megabar , kilobar , decibar , centibar , and millibar...
in less than 24 hours. However, this phrase is liberally applied to most storms undergoing rapid intensification.

In order for rapid deepening to occur, several conditions must be in place. Water temperatures
Sea surface temperature
Sea surface temperature is the water temperature close to the oceans surface. The exact meaning of surface varies according to the measurement method used, but it is between and below the sea surface. Air masses in the Earth's atmosphere are highly modified by sea surface temperatures within a...
must be extremely warm (near or above 30°C, 86°F), and water of this temperature must be sufficiently deep such that waves do not churn deeper cooler waters up to the surface. Wind shear
Wind shear
Wind shear, sometimes referred to as windshear or wind gradient, is a difference in wind speed and direction over a relatively short distance in the atmosphere...
must be low; when wind shear is high, the convection and circulation in the cyclone will be disrupted. Usually, an anticyclone
Anticyclone
An anticyclone is a weather phenomenon defined by the United States' National Weather Service's glossary as "[a] large-scale circulation of winds around a central region of high atmospheric pressure, clockwise in the Northern Hemisphere, counterclockwise in the Southern Hemisphere"...
in the upper layers of the troposphere
Troposphere
The troposphere is the lowest portion of Earth's atmosphere. It contains approximately 80% of the atmosphere's mass and 99% of its water vapor and aerosols....
above the storm must be present as well — for extremely low surface pressures to develop, air must be rising very rapidly in the eyewall
Eye (cyclone)
The eye is a region of mostly calm weather found at the center of strong tropical cyclones. The eye of a storm is a roughly circular area and typically 30–65 km in diameter. It is surrounded by the eyewall, a ring of towering thunderstorms where the second most severe weather of a cyclone...
of the storm, and an upper-level anticyclone helps channel this air away from the cyclone efficiently.

Explosive intensification is a more extreme case of rapid deepening that involves the central pressure of a tropical cyclone deepening at a rate of at least 2.5 mb per hour for a minimum of 12 hours. Explosive intensification is rather rare, as conditions must be exceedingly favorable for cyclone intensification. Explosive intensification occurs regularly in the West Pacific basin, with the greatest frequency off the north coast of Australia; however, it has occurred numerous times in the Atlantic basin, as with 2008's Hurricane Ike
Hurricane Ike
Hurricane Ike was the second-costliest hurricane ever to make landfall in the United States, the costliest hurricane ever to impact Cuba and the second most active hurricane to reach the Canadian mainland in the Great Lakes Region after Hurricane Hazel in 1954...
with the hurricane undergoing a 24 millibar pressure drop in 3 hours. Hurricane Igor
Hurricane Igor (2010)
Hurricane Igor was the most destructive tropical cyclone to strike the Canadian island of Newfoundland on record. The origins of Igor were within a broad area of low pressure that moved off the west coast of Africa on September 6, 2010. Tracking slowly westward, it developed into a tropical...
in 2010 is another prime example. It is rare in the North Indian Ocean, but Cyclone Giri
Cyclone Giri
Cyclone Giri was a powerful tropical cyclone which caused catastrophic damage in parts of Myanmar in late October 2010...
is a good example of a storm going through explosive intensification in this basin. In these cases, however, the pressure was estimated via satellite presentation, not measured directly.

In 2004, Hurricane Charley
Hurricane Charley
Hurricane Charley was the third named storm, the second hurricane, and the second major hurricane of the 2004 Atlantic hurricane season. Charley lasted from August 9 to August 15, and at its peak intensity it attained 150 mph winds, making it a strong Category 4 hurricane on the...
was approaching the west coast of Florida
Florida
Florida is a state in the southeastern United States, located on the nation's Atlantic and Gulf coasts. It is bordered to the west by the Gulf of Mexico, to the north by Alabama and Georgia and to the east by the Atlantic Ocean. With a population of 18,801,310 as measured by the 2010 census, it...
as a category two storm on the Saffir-Simpson scale
Saffir-Simpson Hurricane Scale
The Saffir–Simpson Hurricane Scale , or the Saffir–Simpson Hurricane Wind Scale , classifies hurricanes — Western Hemisphere tropical cyclones that exceed the intensities of tropical depressions and tropical storms — into five categories distinguished by the intensities of their sustained winds...
of hurricane strength. When just off the coast, however, its sustained winds rapidly increased from 110 to 150 mph (along with a pressure drop from 965 to 941 mbar) in only three hours. Charley caused unprecedented destruction in the Punta Gorda
Punta Gorda, Florida
Punta Gorda is a city in Charlotte County, Florida, United States. According to the U.S. Census Bureau estimates of 2007, the city had a population of 16,762. It is the county seat of Charlotte County and the only incorporated municipality in the county...
area, and inflicted major damage across the state of Florida.

In 2005, the minimum central pressure of Hurricane Wilma
Hurricane Wilma
Hurricane Wilma was the most intense tropical cyclone ever recorded in the Atlantic basin. Wilma was the twenty-second storm , thirteenth hurricane, sixth major hurricane, and fourth Category 5 hurricane of the record-breaking 2005 season...
dropped from 981 to 882 mbar in 24 hours, including a drop of 53 mbar in less than 6 hours. This is by far the fastest intensification of any Atlantic hurricane, and possibly the fastest intensification for any system in recorded history. Typhoon Forrest in 1983 may have strengthened faster, deepening from 976 to 876 mbar in just under 24 hours, but pressure estimates for this storm were much less accurate. 2005 was also notable in that two other storms, Katrina
Hurricane Katrina
Hurricane Katrina of the 2005 Atlantic hurricane season was a powerful Atlantic hurricane. It is the costliest natural disaster, as well as one of the five deadliest hurricanes, in the history of the United States. Among recorded Atlantic hurricanes, it was the sixth strongest overall...
and Rita
Hurricane Rita
Hurricane Rita was the fourth-most intense Atlantic hurricane ever recorded and the most intense tropical cyclone ever observed in the Gulf of Mexico. Rita caused $11.3 billion in damage on the U.S. Gulf Coast in September 2005...
, also underwent episodes of extremely rapid intensification.

In 2006
2006 Pacific typhoon season
The 2006 Pacific typhoon season had no official bounds; it ran year-round in 2006, but most tropical cyclones tend to form in the northwestern Pacific Ocean between May and November...
, the minimum central pressure of Typhoon Chebi
Typhoon Chebi
The name Chebi is on the name list for the western north Pacific has been used for two tropical cyclones since the name list was introduced in 2000...
in the Western Pacific dropped 75 mbar in 24 hours, including a 60 mbar pressure drop in 6 hours, as it intensified from a tropical storm to a category four equivalent typhoon in one advisory.

In 2010, Cyclone Ului intensified from a tropical storm to a Category 5-equivalent in just 24 hours.