Encyclopedia
Rapadura is the Portuguese
Portugal
Portugal , officially the Portuguese Republic is a country situated in southwestern Europe on the Iberian Peninsula. Portugal is the westernmost country of Europe, and is bordered by the Atlantic Ocean to the West and South and by Spain to the North and East. The Atlantic archipelagos of the...
name for a form of sugarcane juice, used as a sweetener or as a candy
Candy
Candy, specifically sugar candy, is a confection made from a concentrated solution of sugar in water, to which flavorings and colorants are added...
, common in Latin American countries such as Brazil
Brazil
Brazil , officially the Federative Republic of Brazil , is the largest country in South America. It is the world's fifth largest country, both by geographical area and by population with over 192 million people...
, Argentina
Argentina
Argentina , officially the Argentine Republic , is the second largest country in South America by land area, after Brazil. It is constituted as a federation of 23 provinces and an autonomous city, Buenos Aires...
and Venezuela
Venezuela
Venezuela , officially called the Bolivarian Republic of Venezuela , is a tropical country on the northern coast of South America. It borders Colombia to the west, Guyana to the east, and Brazil to the south...
(where it is known as papelón) and the Caribbean. See also panela
Panela
Panela is unrefined whole cane sugar, typical of Latin America, which is basically a solid piece of sucrose and fructose obtained from the boiling and evaporation of sugarcane juice....
. It is dried sugarcane
Sugarcane
Sugarcane refers to any of six to 37 species of tall perennial grasses of the genus Saccharum . Native to the warm temperate to tropical regions of South Asia, they have stout, jointed, fibrous stalks that are rich in sugar, and measure two to six metres tall...
juice, in the form of a brick, and is largely produced on site at sugarcane plantations in the very warm tropical regions. It was originally created as an easier way to transport sugar. In Venezuela, it is an essential ingredient for many typical recipes, and in some parts of the country, it is used in place of refined sugar as a more accessible, cheaper and healthier sweetener. 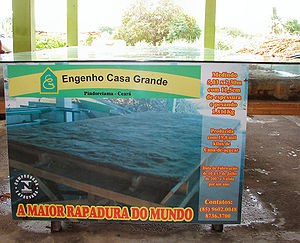 In Panama
Panama
Panama , officially the Republic of Panama , is the southernmost country of Central America. Situated on the isthmus connecting North and South America, it is bordered by Costa Rica to the northwest, Colombia to the southeast, the Caribbean Sea to the north and the Pacific Ocean to the south. The...
, it is also called raspadura, thought to derive from the words raspar (to scrape) and duro (hard), a reference to the way the hard sugar brick is shaved to produce usable shards for cooking. The local dialect often drops the letter "s", resulting in the word we hear as ra'padura.

In Costa Rica
Costa Rica
Costa Rica , officially the Republic of Costa Rica is a multilingual, multiethnic and multicultural country in Central America, bordered by Nicaragua to the north, Panama to the southeast, the Pacific Ocean to the west and the Caribbean Sea to the east....
, it is called tapa dulce because it is usually formed as a cup.

When mixed with other ingredients, such as peanut
Peanut
The peanut, or groundnut , is a species in the legume or "bean" family , so it is not a nut. The peanut was probably first cultivated in the valleys of Peru. It is an annual herbaceous plant growing tall...
s, condensed milk
Condensed milk
Condensed milk, also known as sweetened condensed milk, is cow's milk from which water has been removed and to which sugar has been added, yielding a very thick, sweet product which when canned can last for years without refrigeration if unopened. The two terms, condensed milk and sweetened...
, coconut
Coconut
The coconut palm, Cocos nucifera, is a member of the family Arecaceae . It is the only accepted species in the genus Cocos. The term coconut can refer to the entire coconut palm, the seed, or the fruit, which is not a botanical nut. The spelling cocoanut is an old-fashioned form of the word...
, or white sugar, it produces a good number of locally marketed and consumed delicacies.

Despite the fact that rapadura is a very old foodstuff, predating even the colonization of Brazil, a German company called Rapunzel has registered the name as a German trademark DE 1143537, an event that has greatly angered Brazilians, as they see the name as a generic, all-purpose word, like "lemonade" or "sandwich". Given there is a precedent (when Japanese Asahi Foods registered the name of the Brazilian fruit cupuaçu
Cupuaçu
Cupuaçu , also spelled Cupuassu, Cupuazú, and Copoasu, is a tropical rainforest tree related to cacao...
as a trademark), the Brazilian government is taking measures to prevent what it understands as theft of the Brazilian identity by pirate entrepreneurs (the term has not been used yet by the government, but is commonplace even in the most moderate press, such as Jornal do Brasil
Jornal do Brasil
Jornal do Brasil, widely known as JB, is a daily newspaper published by Editora JB in Rio de Janeiro, Brazil. It was founded in 1891 and is the third oldest existent Brazilian paper, after the Diário de Pernambuco and O Estado de São Paulo....
). Such measures would include registering brands that previously had not been considered for registering, such as feijoada
Feijoada
Feijoada is a stew of beans with beef and pork, which is a typical from Brazilian Cuisine, is also typical in Angola, Mozambique, Goa, India and other former Portuguese colonies. In Brazil, feijoada is considered by many as the national dish...
, jabuticaba
Jabuticaba
The Jabuticaba is a fruit-bearing tree in the family Myrtaceae native to Minas Gerais in southeastern Brazil grown for the purple, grape-like fruits it produces...
or churrasco
Churrasco
Churrasco is a Portuguese and Spanish term referring to beef or grilled meat more generally, differing across Latin America and Europe, but a prominent feature in the cuisines of Argentina, Brazil, Chile, Nicaragua, Uruguay, and other Latin American countries...
. Some Brazilian individuals and companies are also attempting to counter these moves by registering brands from the "offending" countries, such as sake and shoyu (from Japan
Japan
Japan is an island nation in East Asia. Located in the Pacific Ocean, it lies to the east of the Sea of Japan, China, North Korea, South Korea and Russia, stretching from the Sea of Okhotsk in the north to the East China Sea and Taiwan in the south...
) or Sauerkraut
Sauerkraut
Sauerkraut , directly translated from German: "sour cabbage", is finely shredded cabbage that has been fermented by various lactic acid bacteria, including Leuconostoc, Lactobacillus, and Pediococcus. It has a long shelf-life and a distinctive sour flavor, both of which result from the lactic acid...
(from Germany) to point out the absurdity of accepting generic foods as trademarks.

As of February 2009, Rapunzel has removed the Rapadura name from their unrefined and unbleached, whole cane sugar product sold in health food stores, though their website has not yet been updated to reflect this.
The source of this article is wikipedia, the free encyclopedia.  The text of this article is licensed under the GFDL.