Encyclopedia
Radiocontrast agents are a type of medical contrast medium
Contrast medium
A medical contrast medium is a substance used to enhance the contrast of structures or fluids within the body in medical imaging...
used to improve the visibility of internal bodily structures in an X-ray
X-ray
X-radiation is a form of electromagnetic radiation. X-rays have a wavelength in the range of 0.01 to 10 nanometers, corresponding to frequencies in the range 30 petahertz to 30 exahertz and energies in the range 120 eV to 120 keV. They are shorter in wavelength than UV rays and longer than gamma...
based imaging techniques such as computed tomography
Computed tomography
X-ray computed tomography or Computer tomography , is a medical imaging method employing tomography created by computer processing...
(CT) or radiography
Radiography
Radiography is the use of X-rays to view a non-uniformly composed material such as the human body. By using the physical properties of the ray an image can be developed which displays areas of different density and composition....
(commonly known as X-ray imaging). Radiocontrast agents are typically iodine
Iodine
Iodine is a chemical element with the symbol I and atomic number 53. The name is pronounced , , or . The name is from the , meaning violet or purple, due to the color of elemental iodine vapor....
or barium
Barium
Barium is a chemical element with the symbol Ba and atomic number 56. It is the fifth element in Group 2, a soft silvery metallic alkaline earth metal. Barium is never found in nature in its pure form due to its reactivity with air. Its oxide is historically known as baryta but it reacts with...
compounds.

Radiocontrast agents used in X-ray
X-ray
X-radiation is a form of electromagnetic radiation. X-rays have a wavelength in the range of 0.01 to 10 nanometers, corresponding to frequencies in the range 30 petahertz to 30 exahertz and energies in the range 120 eV to 120 keV. They are shorter in wavelength than UV rays and longer than gamma...
examinations can be grouped based on its use. 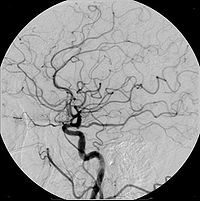 Iodine based contrast media are usually classified as ionic or non-ionic. Both types are used most commonly in radiology, due to its relatively harmless interaction with the body and its solubility. It is primarily used to visualize vessels, and changes in tissues on radiography and CT, but can also be used for tests of the urinary tract, uterus and fallopian tubes. It may cause the patient to feel as if he or she has urinated on himself. It also puts a metallic taste in the mouth of the patient.

Modern intravenous contrast agents are typically based on iodine. This may be bound either in an organic (non-ionic) compound or an ionic compound. Ionic agents were developed first and are still in widespread use depending on the requirements but may result in additional complications. Organic agents which covalently bind the iodine have fewer side effects as they do not dissociate into component molecules. Many of the side effects are due to the hyperosmolar solution being injected. i.e. they deliver more iodine atoms per molecule. The more iodine, the more "dense" the X-ray effect.

There are many different molecules. Some examples of organic iodine molecules are iohexol
Iohexol
Iohexol is a contrast agent, sold under the trade name Omnipaque. It is available in various concentrations, from 140 to 350 milligrams of iodine per milliliter...
, iodixanol
Iodixanol
Iodixanol is a contrast agent, sold under the trade name Visipaque. Visipaque is commonly used as a contrast agent during coronary angiography. It is the only iso-osmolar contrast agent, with an osmolality of 290 mOsm/kg H2O, the same as blood. It is sold in 2 main concentrations 270 mgI/ml and...
and ioversol
Ioversol
Ioversol is an organoiodine compound that used as a contrast medium. It features both a high iodine content, as well as several hydrophilic groups....
.
Iodine based contrast media are water soluble and harmless to the body. These contrast agents are sold as clear colorless water solutions, the concentration is usually expressed as mg I/ml. Modern iodinated contrast agents can be used almost anywhere in the body. Most often they are used intravenously, but for various purposes they can also be used intraarterially, intrathecally (as in diskography of the spine) and intraabdominally – just about any body cavity or potential space.

Iodine contrast agents are used for the following: 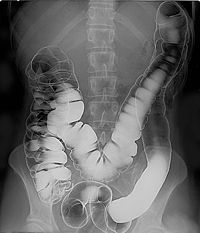 Barium sulfate
Barium sulfate
Barium sulfate is the inorganic compound with the chemical formula BaSO4. It is a white crystalline solid that is odorless and insoluble in water. It occurs as the mineral barite, which is the main commercial source of barium and materials prepared from it...
is mainly used in the imaging of the digestive system. The substance exists as a water insoluble white powder that is made into a slurry with water and administered directly into the gastrointestinal tract
Gastrointestinal tract
The human gastrointestinal tract refers to the stomach and intestine, and sometimes to all the structures from the mouth to the anus. ....
.

Barium sulfate, an insoluble white powder is typically used for enhancing contrast in the GI tract. Depending on how it is to be administered the compound is mixed with water, thickeners, de-clumping agents, and flavourings to make the contrast agent. As the barium sulfate doesn't dissolve, this type of contrast agent is an opaque white mixture. It is only used in the digestive tract; it is usually swallowed or administered as an enema. After the examination, it leaves the body with the feces
Feces
Feces, faeces, or fæces is a waste product from an animal's digestive tract expelled through the anus or cloaca during defecation.-Etymology:...
.

As in the picture on the right where both air and barium are used together (hence the term "double-contrast" barium enema) air can be used as a contrast material because it is less radio-opaque than the tissues it is defining. In the picture it highlights the interior of the colon. An example of a technique using purely air for the contrast medium is an air arthrogram where the injection of air into a joint cavity allows the cartilage covering the ends of the bones to be visualised.

Modern iodinated contrast agents are safe drugs; adverse reactions exist but they are uncommon. The major side effects of radiocontrast are anaphylactoid reactions and contrast-induced nephropathy.

Anaphylactoid reactions occur rarely, but can occur in response to injected as well as oral and rectal contrast and even retrograde pyelography.

They are similar in presentation to anaphylactic reactions
Anaphylaxis
Anaphylaxis is defined as "a serious allergic reaction that is rapid in onset and may cause death". It typically results in a number of symptoms including throat swelling, an itchy rash, and low blood pressure...
, but are not caused by an IgE-mediated immune response. Patients with a history of contrast reactions, however, are at increased risk of anaphylactoid reactions.

Pretreatment with corticosteroids has been shown to decrease the incidence of adverse reactions.

Anaphylactoid reactions range from urticaria
Urticaria
Urticaria is a kind of skin rash notable for pale red, raised, itchy bumps. Hives is frequently caused by allergic reactions; however, there are many non-allergic causes...
and itching, to bronchospasm
Bronchospasm
Bronchospasm or a bronchial spasm is a sudden constriction of the muscles in the walls of the bronchioles. It is caused by the release of substances from mast cells or basophils under the influence of anaphylatoxins...
and facial and laryngeal edema
Edema
Edema or oedema ; both words from the Greek , oídēma "swelling"), formerly known as dropsy or hydropsy, is an abnormal accumulation of fluid beneath the skin or in one or more cavities of the body that produces swelling...
. For simple cases of urticaria and itching, Benadryl (diphenhydramine
Diphenhydramine
Diphenhydramine hydrochloride is a first-generation antihistamine possessing anticholinergic, antitussive, antiemetic, and sedative properties which is mainly used to treat allergies. Like most other first-generation antihistamines, the drug also has a powerful hypnotic effect, and for this reason...
) oral or IV is appropriate. For more severe reactions, including bronchospasm and facial or neck edema, albuterol inhaler, or subcutaneous or IV epinephrine, plus diphenhydramine may be needed. If respiration is compromised, an airway must be established prior to medical management.


Contribution of seafood and other allergies

There are no true allergies against iodine. Suspicion of seafood "allergy" is not a sufficient contraindication to the use of iodinated contrast material. While iodine levels in seafood are higher than in non-seafood items, the consumption of the latter exceeds that of the former by far and there is no evidence that the iodine content of seafood is related to reactions to seafood. Available data suggest that seafood allergy increases the risk of a contrast-mediated reaction by approximately the same amount as allergies to fruits or those with asthma. In other words, over 85% of patients with seafood allergies will not have an adverse reaction to iodinated contrast. Finally, there is no evidence that adverse skin reactions to iodine-containing topical antiseptics (e.g., povidone-iodine) are of any specific relevance to administration of I.V. contrast material.

It has been recommended that metformin
Metformin
Metformin is an oral antidiabetic drug in the biguanide class. It is the first-line drug of choice for the treatment of type 2 diabetes, in particular, in overweight and obese people and those with normal kidney function. Its use in gestational diabetes has been limited by safety concerns...
, an oral antidiabetic agent, be stopped for 48 hours following the intravascular administration of contrast media and that the use of metformin not be resumed until renal function has been shown to be normal. The reasoning is that if the contrast medium causes kidney failure (as happens rarely) and the person continues to take metformin (which is normally excreted by the kidneys), there may be a toxic accumulation of metformin, increasing the risk of lactic acidosis
Lactic acidosis
Lactic acidosis is a physiological condition characterized by low pH in body tissues and blood accompanied by the buildup of lactate especially D-lactate, and is considered a distinct form of metabolic acidosis. The condition typically occurs when cells receive too little oxygen , for example...
, a dangerous complication.

However, guidelines published by the Royal College of Radiologists suggest this is not as important for patients who receive less than 100 ml of contrast media and have normal renal function
Creatinine
Creatinine is a break-down product of creatine phosphate in muscle, and is usually produced at a fairly constant rate by the body...
. If renal impairment is found before administration of the contrast, metformin should be stopped 48 hours before and after the procedure.
The source of this article is wikipedia, the free encyclopedia.  The text of this article is licensed under the GFDL.