In chemistry
Chemistry
Chemistry is the science of matter, especially its chemical reactions, but also its composition, structure and properties. Chemistry is concerned with atoms and their interactions with other atoms, and particularly with the properties of chemical bonds....
, an aryne is an uncharged reactive intermediate
Reactive intermediate
In chemistry a reactive intermediate is a short-lived, high energy, highly reactive molecule. When generated in a chemical reaction it will quickly convert into a more stable molecule. Only in exceptional cases can these compounds be isolated and stored, e.g. low temperatures, matrix isolation...
derived from an aromatic system by removal of two ortho substituent
Substituent
In organic chemistry and biochemistry, a substituent is an atom or group of atoms substituted in place of a hydrogen atom on the parent chain of a hydrocarbon...
s, leaving two orbitals
Atomic orbital
An atomic orbital is a mathematical function that describes the wave-like behavior of either one electron or a pair of electrons in an atom. This function can be used to calculate the probability of finding any electron of an atom in any specific region around the atom's nucleus...
with two electron
Electron
The electron is a subatomic particle with a negative elementary electric charge. It has no known components or substructure; in other words, it is generally thought to be an elementary particle. An electron has a mass that is approximately 1/1836 that of the proton...
s distributed between them. . In analogy with carbene
Carbene
In chemistry, a carbene is a molecule containing a neutral carbon atom with a valence of two and two unshared valence electrons. The general formula is RR'C:, but the carbon can instead be double-bonded to one group. The term "carbene" may also merely refer to the compound H2C:, also called...
s and nitrene
Nitrene
In chemistry, a nitrene is the nitrogen analogue of a carbene. The nitrogen atom has only 6 valence electrons and is therefore considered an electrophile...
s, an aryne has a singlet state
Diradical
A diradical in organic chemistry is a molecular species with two electrons occupying two degenerate molecular orbitals . They are known by their higher reactivities and shorter lifetimes. In a broader definition diradicals are even-electron molecules that have one bond less than the number...
and a triplet state
Triplet state
A spin triplet is a set of three quantum states of a system, each with total spin S = 1 . The system could consist of a single elementary massive spin 1 particle such as a W or Z boson, or be some multiparticle state with total spin angular momentum of one.In physics, spin is the angular momentum...
.

The simplest aryne, C6H4 (labeled 1 in the diagram to the right), is sometimes called benzyne. However, this name is open for criticism because it implies a triple bond which would be a special case of triple bonds, so a better name is didehydrobenzene. Benzyne is, like benzene
Benzene
Benzene is an organic chemical compound. It is composed of 6 carbon atoms in a ring, with 1 hydrogen atom attached to each carbon atom, with the molecular formula C6H6....
, stabilized by resonance
Resonance (chemistry)
In chemistry, resonance or mesomerism is a way of describing delocalized electrons within certain molecules or polyatomic ions where the bonding cannot be expressed by one single Lewis formula...
between structures 1 and 2— so, like the case of benzene, a better representation of the electronic structure would be 3. The "extra" pi bond
Pi bond
In chemistry, pi bonds are covalent chemical bonds where two lobes of one involved atomic orbital overlap two lobes of the other involved atomic orbital...
(4b) is localised and orthogonal to the other pi bonds making up the aromatic ring (4a). Benzyne can also be drawn as a diradical: the pi bond 4b splits homolytically, leaving one electron on each of the two atoms that are formally part of that bond.

There are three possible diradical didehydrobenzenes: 1,2-didehydrobenzene, 1,3-didehydrobenzene and 1,4-didehydrobenzene. Their energies in silico
In silico
In silico is an expression used to mean "performed on computer or via computer simulation." The phrase was coined in 1989 as an analogy to the Latin phrases in vivo and in vitro which are commonly used in biology and refer to experiments done in living organisms and outside of living organisms,...
are respectively 106, 122, and 138 kcal/mol (444, 510, and 577 kJ/mol). The 1,4-diradical species has been identified in the Bergman cyclization
Bergman cyclization
The Bergman cyclization or Bergman reaction or Bergman cycloaromatization is an organic reaction and more specifically a rearrangement reaction taking place when an enediyne is heated in presence of a suitable hydrogen donor . It is named for the American chemist Robert George Bergman...
. Professor Maitland Jones of Princeton University
Princeton University
Princeton University is a private research university located in Princeton, New Jersey, United States. The school is one of the eight universities of the Ivy League, and is one of the nine Colonial Colleges founded before the American Revolution....
has studied the interconversion of the 1,2-, 1,3- and 1,4-didehydrobenzenes.

Aryne reactivity can also be extended to carbon insertion reactions into substrates that can react both as a nucleophile
Nucleophile
A nucleophile is a species that donates an electron-pair to an electrophile to form a chemical bond in a reaction. All molecules or ions with a free pair of electrons can act as nucleophiles. Because nucleophiles donate electrons, they are by definition Lewis bases.Nucleophilic describes the...
and as an electrophile
Electrophile
In general electrophiles are positively charged species that are attracted to an electron rich centre. In chemistry, an electrophile is a reagent attracted to electrons that participates in a chemical reaction by accepting an electron pair in order to bond to a nucleophile...
with for instance a malonic acid
Malonic acid
Malonic acid is a dicarboxylic acid with structure CH22. The ionised form of malonic acid, as well as its esters and salts, are known as malonates. For example, diethyl malonate is malonic acid's ethyl ester...
ester . The precursor of benzyne in this reaction is 2-(trimethylsilyl)phenyl triflate.

A 1,2- to 1,3-didehydrobenzene conversion has been postulated to occur in the pyrolysis
Pyrolysis
Pyrolysis is a thermochemical decomposition of organic material at elevated temperatures without the participation of oxygen. It involves the simultaneous change of chemical composition and physical phase, and is irreversible...
(900°C) of the phenyl substituted aryne precursor 1 to acenaphthylene
Acenaphthylene
Acenaphthylene is a polycyclic aromatic hydrocarbon consisting of naphthalene with an ethylene bridge connecting positions 1 and 8. It is a constituent of coal tar. Reduction of the ethylene group gives the related compound acenaphthene. Unlike most polycyclic aromatic hydrocarbons, it has no...
7. 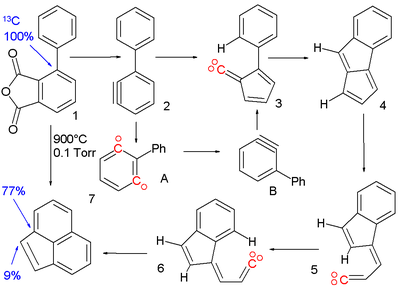 This reaction takes place through several reactive intermediate
Reactive intermediate
In chemistry a reactive intermediate is a short-lived, high energy, highly reactive molecule. When generated in a chemical reaction it will quickly convert into a more stable molecule. Only in exceptional cases can these compounds be isolated and stored, e.g. low temperatures, matrix isolation...
s: the aryne 2 is formed from phenyl substituted phthalic anhydride
Phthalic anhydride
Phthalic anhydride is the organic compound with the formula C6H42O. It is the anhydride of phthalic acid. This colourless solid is an important industrial chemical, especially for the large-scale production of plasticizers for plastics. In 2002, approximately 4.6 billion kilograms were...
which rearranges with ring contraction to the vinylidene 3. This carbene
Carbene
In chemistry, a carbene is a molecule containing a neutral carbon atom with a valence of two and two unshared valence electrons. The general formula is RR'C:, but the carbon can instead be double-bonded to one group. The term "carbene" may also merely refer to the compound H2C:, also called...
gives a C-H insertion reaction
Insertion reaction
An insertion reaction is a chemical reaction where one chemical entity interposes itself into an existing bond of typically a second chemical entity e.g.:...
to pentalene
Pentalene
Pentalene is a polycyclic hydrocarbon composed of two fused cyclopentadiene rings. It has chemical formula C8H6. It is antiaromatic, because it has 4n pi electrons. For this reason it dimerizes even at temperatures as low as -100°C....
4 and then an extrusion to vinylidene 5. After cis-trans isomerisation to 6 a final insertion reaction gives the acenaphthylene. Evidence for a phenyl migration in aryne 2 from the 1,2-didehydrobenzene to the 1,3-didehydrobenzene is based on isotope scrambling. When the ipso
IPSO
IPSO may refer to:* International Programme on the State of the Ocean IPSO* Les Intellectuels pour la souveraineté — a group of intellectuals studying and promoting Quebec independence....
carbon atom is replaced by 13C in the precursor molecule it will in the default mechanism again show up in the acenaphthylene in an ipso arene position. The presence of 13C in the bridge position can only be explained when 15% of 2 isomerizes to 1,3-didehydrobenzene A.

Aryne chemistry has been applied to the synthesis of novel aryl amines in a tandem reaction including two Diels-Alder reaction
Diels-Alder reaction
The Diels–Alder reaction is an organic chemical reaction between a conjugated diene and a substituted alkene, commonly termed the dienophile, to form a substituted cyclohexene system. The reaction can proceed even if some of the atoms in the newly formed ring are not carbon...
s with three benzyne molecules reacting to one imidazole
Imidazole
Imidazole is an organic compound with the formula C3H4N2. This aromatic heterocyclic is a diazole and is classified as an alkaloid. Imidazole refers to the parent compound, whereas imidazoles are a class of heterocycles with similar ring structure, but varying substituents...
molecule : 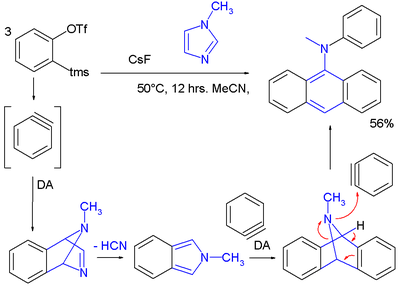 2-(trimethylsilyl)phenyl triflate as aryne precursor is a mild method for aryne generation and this process have been widely used in organic synthesis. For example, since the seminal work of Guitiàn, Perez and co-workers, it has been established that arynes participate in palladium-catalyzed processes .
Their very high reactivity can help to trap very unstable Pd species. As an example, azapalladium(II) complexes resulting from the oxidative addition of an acyloxime to Pd0 can undergo aminopalladation of aryne and subsequently a C-H activation process to give access to biologically relevant phenanthridine
Phenanthridine
Phenanthridine is a nitrogen heterocyclic compound that is the basis of DNA-binding fluorescent dyes through intercalation. Examples of such dyes are ethidium bromide and propidium iodide. Acridine is an isomer of phenanthridine....
s and isoquinoline
Isoquinoline
Isoquinoline is a heterocyclic aromatic organic compound. It is a structural isomer of quinoline. Isoquinoline and quinoline are benzopyridines, which are composed of a benzene ring fused to a pyridine ring. In a broader sense, the term isoquinoline is used to make reference to isoquinoline...
s: