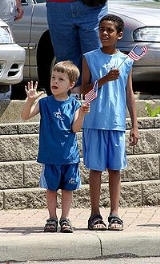 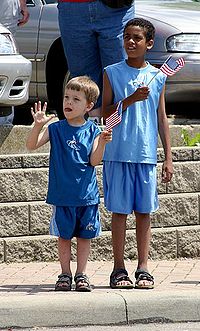 Racial integration, or simply integration includes desegregation
Desegregation
Desegregation is the process of ending the separation of two groups usually referring to races. This is most commonly used in reference to the United States. Desegregation was long a focus of the American Civil Rights Movement, both before and after the United States Supreme Court's decision in...
(the process of ending systematic racial segregation
Racial segregation
Racial segregation is the separation of humans into racial groups in daily life. It may apply to activities such as eating in a restaurant, drinking from a water fountain, using a public toilet, attending school, going to the movies, or in the rental or purchase of a home...
). In addition to desegregation, integration includes goals such as leveling barriers to association, creating equal opportunity
Equal opportunity
Equal opportunity, or equality of opportunity, is a controversial political concept; and an important informal decision-making standard without a precise definition involving fair choices within the public sphere...
regardless of race, and the development of a culture
Culture
Culture is a term that has many different inter-related meanings. For example, in 1952, Alfred Kroeber and Clyde Kluckhohn compiled a list of 164 definitions of "culture" in Culture: A Critical Review of Concepts and Definitions...
that draws on diverse traditions, rather than merely bringing a racial minority
Minority group
A minority is a sociological group within a demographic. The demographic could be based on many factors from ethnicity, gender, wealth, power, etc. The term extends to numerous situations, and civilizations within history, despite the misnomer of minorities associated with a numerical statistic...
into the majority
Majority
A majority is a subset of a group consisting of more than half of its members. This can be compared to a plurality, which is a subset larger than any other subset; i.e. a plurality is not necessarily a majority as the largest subset may consist of less than half the group's population...
culture. Desegregation is largely a legal matter, integration largely a social one.

Morris J. MacGregor, Jr. in his paper "Integration of the Armed Forces 1940-1969" writes concerning the words integration and desegregation:

...In recent years many historians have come to distinguish between these like-sounding words.. The movement toward desegregation, breaking down the nation's Jim Crow
Jim Crow laws
The Jim Crow laws were state and local laws in the United States enacted between 1876 and 1965. They mandated de jure racial segregation in all public facilities, with a supposedly "separate but equal" status for black Americans...
system, became increasingly popular in the decade after World War II
World War II
World War II, or the Second World War , was a global conflict lasting from 1939 to 1945, involving most of the world's nations—including all of the great powers—eventually forming two opposing military alliances: the Allies and the Axis...
. Integration, on the other hand, Professor Oscar Handlin
Oscar Handlin
Oscar Handlin was an American historian. As a professor of history at Harvard University for over 50 years, he directed 80 PhD dissertations and helped promote social and ethnic history...
maintains, implies several things not yet necessarily accepted in all areas of American society. In one sense it refers to the "levelling of all barriers to association other than those based on ability, taste, and personal preference"; in other words, providing equal opportunity. But in another sense integration calls for the random distribution of a minority throughout society. Here, according to Handlin, the emphasis is on racial balance in areas of occupation, education, residency, and the like.

From the beginning the military establishment rightly understood that the breakup of the all-black unit would in a closed society necessarily mean more than mere desegregation. It constantly used the terms integration and equal treatment and opportunity to describe its racial goals. Rarely, if ever, does one find the word desegregation in military files that include much correspondence.

Similarly, Keith M. Woods writing on the need for precision in journalistic
Journalism
Journalism is the practice of investigation and reporting of events, issues and trends to a broad audience in a timely fashion. Though there are many variations of journalism, the ideal is to inform the intended audience. Along with covering organizations and institutions such as government and...
language writes, "Integration happens when a monolith is changed, like when a black family moves into an all-white neighborhood. Integration happens even without a mandate from the law. Desegregation," on the other hand, "was the legal remedy to segregation." Making almost the same point, Henry Organ, identifying himself as " a participant in the Civil Rights Movement on the Peninsula [i.e. the San Francisco Peninsula
San Francisco Peninsula
The San Francisco Peninsula is a peninsula in the San Francisco Bay Area that separates the San Francisco Bay from the Pacific Ocean. On its northern tip is the City and County of San Francisco. Its southern base is in Santa Clara County, including the cities of Palo Alto, Los Altos, and Mountain...
- ed.] in the '60s... and ... an African American," wrote in 1997, " The term 'desegregation' is normally reserved to the legal/legislative domain, and it was the legalization of discrimination in public institutions based on race that many fought against in the '60s. The term 'integration,' on the other hand, pertains to a social domain; it does and should refer to individuals of different background who opt to interact."

In their book By the Color of Our Skin (1999) Leonard Steinhorn
Leonard Steinhorn
Leonard Steinhorn is an American author, specialist in American politics and culture, and professor of communication at American University....
and Barbara Diggs-Brown - who also make a similar distinction between desegregation and integration - write "... television has... give[n] white Americans the sensation of having meaningful, repeated contact with blacks without actually having it. We call this phenomenon virtual integration, and it is the primary reason why the integration illusion - the belief that we are moving toward a colorblind nation - has such a powerful influence on race relations in America today." Reviewing this book in the libertarian
Libertarianism
Libertarianism, in the strictest sense, is the political philosophy that holds individual liberty as the basic moral principle of society. In the broadest sense, it is any political philosophy which approximates this view...
magazine Reason
Reason (magazine)
Reason is a libertarian monthly magazine published by the Reason Foundation. The magazine has a circulation of around 60,000 and was named one of the 50 best magazines in 2003 and 2004 by the Chicago Tribune.- History :...
, Michael W. Lynch sums up some of their conclusions as, "Blacks and whites live, learn, work, pray, play, and entertain separately." He cites Stephan and Abigail Themstrom's America in Black and White as making the case to the contrary, gives anecdotal evidence on both sides of the question, and writes:

The problem, as I see it, is that access to the public spheres, specifically the commercial sphere, often depends on being comfortable with the norms of white society. If a significant number of black children aren't comfortable with them, it isn't by choice: It's because they were isolated from those norms. It's one thing for members of the black elite and upper middle class to choose to retire to predominantly black neighborhoods after a lucrative day's work in white America. It's quite another for people to be unable to enter that commercial sphere because they spent their formative years in a community that didn't, or couldn't, prepare them for it. Writes Harvard University
Harvard University
Harvard University is a private Ivy League university located in Cambridge, Massachusetts, United States, established in 1636 by the Massachusetts legislature. Harvard is the oldest institution of higher learning in the United States and the first corporation chartered in the country...
sociologist
Sociology
Sociology is the study of society. It is a social science—a term with which it is sometimes synonymous—which uses various methods of empirical investigation and critical analysis to develop a body of knowledge about human social activity...
Orlando Patterson, "The greatest problem now facing African-Americans is their isolation from the tacit norms of the dominant culture, and this is true of all classes."

Although widespread, this distinction between integration and desegregation is not universally accepted. For example, it is possible to find references to "court-ordered integration" from sources such as the Detroit News, PBS
Public Broadcasting Service
The Public Broadcasting Service is an American non-profit public broadcasting television network with 354 member TV stations in the United States which hold collective ownership. Its headquarters is in Arlington, Virginia....
, or even Encarta
Encarta
Microsoft Encarta was a digital multimedia encyclopedia published by Microsoft Corporation from 1993 to 2009. , the complete English version, Encarta Premium, consisted of more than 62,000 articles, numerous photos and illustrations, music clips, videos, interactive contents, timelines, maps and...
.
These same sources also use the phrase "court-ordered desegregation", apparently with exactly the same meaning; the Detroit News uses both expressions interchangeably in the same article.

When the two terms are confused, it is almost always to use integration in the narrower, more legalistic sense of desegregation; one rarely, if ever, sees desegregation used in the broader cultural sense.