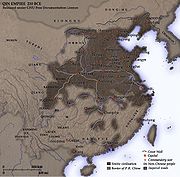 Beidi or Northern Di were groups of people who lived to the north of what was then China during the Zhou Dynasty
Zhou Dynasty
The Zhou Dynasty was a Chinese dynasty that followed the Shang Dynasty and preceded the Qin Dynasty. Although the Zhou Dynasty lasted longer than any other dynasty in Chinese history, the actual political and military control of China by the Ji family lasted only until 771 BC, a period known as...
. By the end of the dynasty they were mostly conquered or absorbed by the Chinese.

The ancient Chinese classed their neighbors by compass direction, calling them the Northern Di, Southern Man
Nanman
Nanman were aboriginal tribes who lived in southwestern China. They may have been related to the Sanmiao, dated to around the 3rd century BC. The Nanman were multiple ethnic groups including the Miao, the Kinh, the Thai, and some Tibeto-Burman groups such as the Bai. There was never a single...
, Eastern Yi
Dongyi
Dongyi was a collective term for people in eastern China and in lands located to the east of ancient China. People referred to as Dongyi vary across the ages.The early Dongyi culture was one of earliest neolithic cultures in China....
and Western Rong. Bei Di may simply mean 'northern foreigners' or it may have been a definite people whose nature was explained by its location. We have too little information to assign them to any ethnic or linguistic group. The four names, or combinations of them like 'Yi-Di' are often used vaguely to mean un-Chinese.

The Di seem to have lived in a horizontal band from the upper Ordos Loop
Ordos Loop
The Ordos Loop is a region of China west of Beijing. The Yellow River flows north-northeast, then east, and then south forming three sides of an imperfect rectangle. The south side is formed by the Wei River which rises not far from the southwest corner and flows east to the southeast corner...
and across northern Shanxi
Shanxi
' is a province in Northern China. Its one-character abbreviation is "晋" , after the state of Jin that existed here during the Spring and Autumn Period....
to the state of Yan
Yan (state)
Yān was a state during the Western Zhou, Spring and Autumn and Warring States Periods of Chinese history. Its capital was Ji...
north of Beijing. This area was a transition zone between the emerging Chinese civilization and the steppe peoples to the north. They seem to have practiced a mixed pastoral, agricultural and hunting economy. Other groups of Di seem to have lived interspersed between the Chinese states. To their north was the emerging steppe society whom the Chinese later called Hu
Donghu
Donghu was the name of a Mongolic nomadic tribal confederation that was first recorded from the 7th century BCE and was destroyed by the Xiongnu in 150 BCE. Donghu was later divided into the Wuhuan and Xianbei Confederations, from which the Mongols are derived...
. To the southwest the Rong lived along the northwest frontier of China. The Di and Rong are often associated and both were considered more warlike and less civilized than the Yi and Man.

The Di had walled towns and fought on foot. They were often enemies and sometimes allies of the various Chinese states. We hear of trade, treaties, marriage alliances and Chinese politicians fleeing to exile among the Di.

The Bai (White) Di lived in the west and the more warlike Chi (Red) Di to the east. The state of Zhongshan
Zhongshan (state)
Zhongshan was a Di state created by the nomadic Xianyu tribe in China during the later Zhou Dynasty, in the Chinese written sources it is referred to as a state of the Bai Di .)...
near Beijing was founded by the Bai Di. It adopted Chinese material culture but was never considered properly Huaxia
Huaxia
Huaxia is a name often used to represent China or Chinese civilization.-Etymology:According to the historical record, Zuo Zhuan, the ancient Xia Dynasty of central China was a state that held propriety and justice in high esteem...
(Chinese). Other Di groups were the Chang Di and Xianyu. The state of Fei and the Xianyu were part of the White Di confederation.
The scattered references to the Di do not add up to a coherent history. According to legend the ancestors of Zhou dynasty lived among the Rong and Di until Gu Gong Danfu led then away to the mid-Wei River
Wei River
The Wei River is a major river in west-central China's Gansu and Shaanxi provinces. It is the largest tributary of the Yellow River and very important in the early development of Chinese civilization....
valley where they built their capital near Mount Qi
Qishan County
Qishan County is a county of Baoji, Shaanxi, China. It was the site of Zhouyuan , the first capital of the Zhou Dynasty . Historically, the site was also known as Qiyi or Qishan . It is located in Fengchu township on the Weishui River to the south of Mt. Qi...
(before 1107BC). In 676-651 Duke Xian of Jin
Duke Xian of Jin
Duke Xian of Jin , Ancestral name is Ji, given name is Guizhu , was the nineteenth ruler of the State of Jin. He was also the ninth ruler of Jin in the Spring and Autumn Period and the second duke of Jin. When his father, Duke Wu of Jin, died in 677 BC, Guizhu ascended the throne of Jin and became...
conquered a number of Rong and Di groups. In 662 the Di drove the Rong out of Taiyuan
Taiyuan
Taiyuan is the capital and largest city of Shanxi province in North China. At the 2010 census, it had a total population of 4,201,591 inhabitants on 6959 km² whom 3,212,500 are urban on 1,460 km². The name of the city literally means "Great Plains", referring to the location where the Fen River...
. In 662-659 the state of Xing was nearly destroyed by the Chi Di until it was rescued by Qi. In 660BC the Chi Di took the capital of Wey
Wey
-Places:*Wei The Wey spelling is used to distinguish it from Wei when both are mentioned in the same article.*River Wey*Wey and Arun Canal*Wey and Godalming Navigations...
and killed its king, but were driven out by Qi. From 660 to 507 Jin fought many wars with the Di, destroying Chi Di state of Lu in 594, 'subjugating' them in 541 and being severely defeated by the Xianyu Di in 507. In 640 the Di were allied with Qi and Xing against Wey and in 636 the Di helped the Zhou king against the state of Cheng. In 531 Jin attacked the Xianyu and Fei. By about 400bc most of the Di and Rong had been eliminated as independent polities. Zhongshan was conquered by Wei in 406, regained its independence in 377 and was conquered by Zhou in 295. Circa 283-265 Tian Dan
ROCS Tian Dan (FFG-1110)
For the Warring States Period general of the same name see Tian DanROCS Tian Dan is the eighth ship of Cheng Kung-class guided-missile frigate of the Republic of China Navy, which was based on Oliver Hazard Perry-class of the United States Navy...
fought some Di who seem to have lived within the area of the Chinese states.